The Hamilton Tiger-Cats are headed to the Grey Cup, hoping they will get to party like it’s 1999.

The Tiger-Cats dominated the Edmonton Eskimos 36-16 in Sunday’s East Division final, punching their ticket to Calgary next Sunday for the 107th Grey Cup, where they will face the Winnipeg Blue Bombers. The Ticats have not hoisted the CFL’s cherished silver trophy in 20 years. The Bombers’ drought is even longer: They last won the Grey Cup in 1990.

The victory came after a 15-3 regular season – the best in Ticats history. Now these Tabbies have a chance to become the best squad in recent franchise memory, and to ease the heartache suffered in back-to-back Grey Cup losses in 2013 and 2014.

“It’s one of the best and the closest teams I’ve ever been around,” Banks said. “I love it. Any time you’ve got a football team that’s this close, you’re bound to win a lot of football games … hopefully now we can go finish it.”

Evans – who was Hamilton’s backup quarterback until Jeremiah Masoli sustained a season-ending ACL injury in July – was steady in his playoff debut. He completed 21 of 36 passes for 386 yards and a touchdown, against one interception.

The Ticats thwarted Eskimos quarterback Trevor Harris, who had been a star in Edmonton’s victory over Montreal in the East semi-final. Hamilton held Harris to 28-of-40 passing for 309 yards and one touchdown and picked him off twice.

The turnovers forced by Hamilton’s defence were critical – interceptions from Richard Leonard and Justin Tuggle, and a fumble recovery from Frankie Williams.

After dealing with a record accumulation of snow for Remembrance Day earlier in the week, Hamilton’s weather was sunny and just above freezing for game day. A sold-out crowd of 25,177 filled Tim Hortons Field – a record for Hamilton’s east-end stadium, where the Ticats went undefeated this season. The fans were dressed all in black at the team’s request, and waved gold rally towels.

“It was sweet is what it was,” said Evans, who says he was overcome by the sight of the fans all dressed alike. “Honestly, I was just trying to keep it cool running out … that was one of the coolest things I’ve seen.”

The Tiger-Cats defence made its first huge play just a few minutes into the first quarter, as Leonard picked off an ill-fated Harris pass. When the Ticats took over on offence, they put up a field goal.

Hamilton scored its first touchdown just minutes later. Evans moved the team 31 yards down field, including his own long run, before making way for Watford to rumble those last few. The Ticats had 13 unanswered first-quarter points.

The Esks finally got on the board early in the second quarter. Harris completed five passes – the last to DaVaris Daniels, which he took 21 yards for a touchdown.

The Ticats quickly answered back. Evans threw up a long ball toward the end zone as Banks streaked down the sideline, desperately trying to outpace looming Esks defensive back Josh Johnson. The ball appeared just out of reach for Hamilton’s 5-foot-7 slotback, but then he stretched out at the last second and made an acrobatic 47-yard catch.

“Speedy makes plays in big-time games like this,” Evans said of Banks’s catch. “I just know from my angle, when he caught it, it was one of the best catches I’ve ever been a part of.”

The Esks inched closer with a couple of field goals before the half, but Hamilton added one, too, and took a 23-13 lead into the locker room.

Inside the third quarter, the Tiger-Cats were pushing deep into Edmonton territory when Esks cornerback Tyquwan Glass intercepted Evans. The Ticats pined the Esks deep in their own endzone to get a safety. Then came Hajrullahu’s fourth field goal of the day.

With the Ticats up by 15 late in the third, a giant Hamilton Proud flag made its way through the crowd and the delighted fans crooned along to Sweet Caroline. Seconds after the song was over, Ticats linebacker Tuggle pulled in an interception to bring Tabbies fans to their feet again. Good times in Tigertown indeed.

Each time the Esks inched closer with a field goal, the Ticats would strike right back, too.

Hamilton coach Orlondo Steinauer was a player on the last Ticats team to win a Grey Cup, in 1999. Now he gets to lead this one to Calgary to try to end Hamilton’s Cup drought.

“The men bought in. They wanted to be great,” Steinauer said of his 2019 team “When you’re accountable to the person next to you, you don’t want to let your teammates down, and that’s when you start to have the makings, and the potential for something special.”

‘We can’t let this one slip away’: Ticats determined to make up for Grey Cup heartbreakers
November 15, 2019 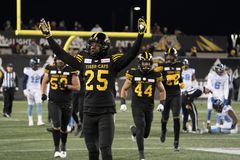 Trevor Harris puts on quite a show as Eskimos down Alouettes in East semi-final
Subscriber content
November 10, 2019 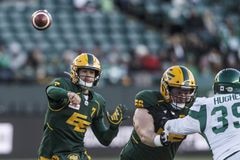