We will often say upon meeting people we don’t see much that they “haven’t aged a day.”

What we mean is they haven’t turned into a human potato, like the rest of us. Or still have their hair. Or don’t look like they are wearing a life preserver under their shirt.

"Vaguely similar, although nowhere close to identical, to the person they were 10 years ago’ – that’s our bar for not aging a day.

Tom Brady is the exception. He looks better at 42 than he did at 25. He’s moving backward through time, like Doctor Who.

The New England Patriots quarterback has become an exemplar of the 21st century. We live in a culture trying to extend many aspects of adolescence – vitality, heedlessness, good looks – into advanced middle-age. Once a compliment, ‘mature’ is now a dirty word.

For a decade, Brady was the shining example of that desire. Which is why it is so hard for people of a certain vintage to imagine him slipping.

He isn’t anywhere close to off the cliff yet, but over the past couple of weeks, you can see him peeking over the edge.

This is the downside to the modern fixation with pros who have maintained their level long past what was once thought possible. Your Roger Federers, Jaromir Jagrs and Serena Williamses. Once they start to go, it will function as a memento mori for the rest of us. Time will catch you from behind and, when it does, it will take you down in a heap. Everything really isn’t possible.

Oddly, Brady hurts the most.

Unlike the others, Brady didn’t just hang on through his late 30s and into his 40s. He got better. At the beginning of each season, he’d show up looking like a man who’d spent the summer having all the blood in his body sucked out, cleaned up and put back in.

A few years ago, I stood a few feet away from him after a game. He is a great deal bigger than he appears on television and is preposterously handsome.

He was wearing a T-shirt made of a shimmering fabric designed to resemble sheet metal. It was a ridiculous shirt. On you or I, it’d look like the lead bib you wear while taking X-rays at the dentist’s office.

What makes Brady so compelling is that while few people like him – too sure of himself, too remote, too dull – just about everybody would like to be him.

He’s birthed an entire sub-genre of journalism – the Tom Brady Method. This isn’t anything to do with being a great NFL player. Lamar Jackson is also a pretty amazing quarterback, but no one is dying to know how many electrolytes he consumes on game day.

What does Brady eat? Vegetables and “alkalizing” foods, which one assumes don’t come in Party Packs.

“If I’m craving bacon, I have a slice,” Brady told an interviewer, imagining the sort of thing a human being might say.

You may have heard of the mythical person who can have just one slice of bacon. Now, after centuries of searching, we have finally found him.

What does he drink? Nothing fun. How often does he work out? Constantly. How weird are those workouts? Pretty weird.

After a while, you began to realize that football isn’t really Brady’s job. Being Tom Brady is Tom Brady’s job. He views his body as a sort of heritage building, one that’s well funded and under constant renovation.

When he wrote a book about it, he subtitled it, How to Achieve a Lifetime of Sustained Peak Performance.

Brady wasn’t trying to improve you. He was trying to keep you alive forever.

Although most of us are too sybaritic to embrace this way of being – “No wine for me, thanks, I’m intending to hit the 22nd Century running” – it’s comforting to believe it is possible.

Not so long ago, athletes aged like the rest of the population. They were born better, but they lived like rock stars on a permanent bender. They’d arrive fresh faced and then all those long nights would get hold of them.

Take a look at a picture of any sports team in the 1970s or ’80s. The rookies look like kids. Everyone else looks like the hard-drinking police detective in a French noir. And those are the guys in their late-20s. By 30, most of them were finished.

There were exceptions, your Gordie Howes, George Blandas and what have you. But they were seen as especially gifted freaks. There was no point trying to become them. You had to just be them.

Moreso than shifting cultural mores, free agency and big money changed that attitude. Once pros clicked to the idea that it was possible to make enough money playing sports to last you a lifetime, they became focused on extending that period for as long as possible.

Someone should write a book about the last time an NHLer smoked in the showers between periods. It was the true end of an era.

Money also drew in the personal trainers, strength coaches, dieticians and assorted sports scientists. A self-improvement ecosystem attached itself symbiotically to athletics. The self-improvers created the template; the athletes proved it could work for anyone, thus creating a new financial stream.

Like everything else they do, pros attacked this new fashion hard.

One assumes athletes still like to have a cheeky night out, but it is no longer cool to talk about. Athletes are permitted to be photographed with alcohol in precisely one place – the locker room right after winning a championship of some sort. To be seen anywhere else with it is a profound failing.

As the pros changed, the general perception of what was possible changed, too. A couple of generations ago, no one was expected to display teenage energy into full adulthood. It was seen as unserious. Now everyone is expected to. To do otherwise is advertising that you’ve given up.

The outer limits of how far you can take this goal of agelessness kept expanding.

There are many examples, but Brady is the perfected one. He’s the most brazen in his predictions, saying he’ll play until he’s 45. Notably, he hasn’t said anything about quitting then.

However you feel about Brady the football player or Brady the person, you cannot but help admire Brady the science experiment.

If he can do it, maybe you, too, can extend your vitality forever – that’s the idea at least. Brady’s always telling people there’s a formula. Although you do not intend to start exclusively eating zucchini mush and ungarnished haddock, and working out four times a day, theoretically that is still possible.

Every year that Brady was still the best set another benchmark for millions of middle-aged people. If you are his contemporary, you want to see him do it forever.

Of course, we are conveniently forgetting that 90 per cent of what makes Brady (or any other athlete) great is genetics.

His longevity is not an instructive lesson to everyone else. It’s a total fantasy utterly removed from anyone else’s lived reality. But it still gives you hope.

Then he misses a couple of reads and floats a couple of passes. And you start thinking, “Twilight is upon us. All of us.”

Despite their record, this year’s New England Patriots are slipping. Everything about the team is patchwork. Although still cruising on reputation, there was something different about the beating the Houston Texans laid on them last weekend.

For the first time in a long while, Brady looked tired. And not just with the quality of his teammates.

Should the Patriots slip this year, there will be a lot of woo-hooing around the NFL. Brady’s been up on his perch for a long time. It’s natural that people want to see him knocked off it.

I’ll take no pleasure in it, but I might end up liking Brady more once it happens.

Once the aura rubs off, he will be one of us again. Finding it just a little harder to get out of bed each morning than it once was.

That’s the Tom Brady everybody can relate to – the man in decline. However much care and worry we apply to avoiding it, we’re all headed there. Even him. 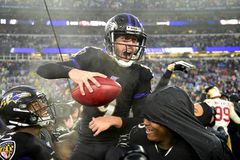 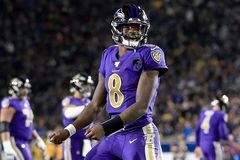