The 39-year-old Dinwiddie, a native of Elk Grove, Calif., becomes the 45th head coach in franchise history. He inherits a team that went 4-14-0 last season.

“Ryan is one of the top young coaching minds in the CFL right now and we welcome him to the MLSE family,” Argos president Bill Manning said in a statement Thursday. “We believe he will set the example to establish the type of culture we need for the Argos to be successful.”

Dinwiddie has spent the past four years as the Stampeders’ quarterbacks coach working with Bo Levi Mitchell and backup Nick Arbuckle. Prior to that he was an assistant with the Montreal Alouettes from 2013 to 15.

Dinwiddie had been linked to several other jobs in recent days including the Ottawa Redblacks head coaching position that went to Paul LaPolice. He was also linked to the B.C. Lions offensive co-ordinator job.

“I am thrilled and honoured to be part of such a historic organization and I am extremely grateful for the opportunity,” Dinwiddie said. “Winning Grey Cups are the ultimate goal and I can’t wait to get started.”

A former quarterback, Dinwiddie played five seasons in the CFL – three with the Winnipeg Blue Bombers (2006-08) and two with the Saskatchewan Roughriders (2010-11).

His first career start came for the Bombers in a 23-19 loss to Saskatchewan in the 2007 Grey Cup after starter Kevin Glenn broke his arm in the East Division final win over Toronto.

Prior to turning pro, Dinwiddie starred at Boise State where during his senior season he threw for 4,031 yards and 28 touchdowns. He signed with the NFL’s Chicago Bears as an undrafted free agent in 2004 and spent time with the Hamburg Sea Devils in NFL Europe before coming to the CFL.

“His exhaustive passion to prepare to win makes him a priority in setting our new culture,” Argos GM Mike (Pinball) Clemons said. “The former CFL QB is the son of a coach, smart and hard working with a winning pedigree.”

Chamblin’s tenure lasted just one season. His future had been up in the air since Oct. 8 when the Argos fired GM Jim Popp and replaced him with Clemons, a franchise icon who is a former star player, head coach and executive with the club.

The Argos were a league-worst 2-12-0 and were coming off a 55-8 loss in Vancouver against the B.C. Lions when Popp was canned. Toronto finished at 4-14-0, thanks to two late-season wins over the even worse Ottawa Redblacks.

The Argos had hired Chamblin as head coach on a multiyear contract in December, 2018. He succeeded Marc Trestman, who paid the price for a 4-14-0 season in 2018 season that saw the team lose nine of its final 10 games.

Chamblin, 42, was head coach of the Saskatchewan Roughriders between 2012 and 15, guiding the Riders to a Grey Cup in 2013 and earning CFL coach of the year.

He spent the 2018 season at the University of Arkansas as a quality control and defensive backs coach. He was the Argos’ defensive co-ordinator in 2017 when they won the Grey Cup.

Chamblin was philosophical after the October changes in Toronto’s front office.

“At the end of the day, I’ll still be working the next couple of days and if I’m the coach I’ll be here and if I’m not, I won’t,” he said at the time. “It [uncertainty] isn’t going to change my mind set … which is to wrap this up with the coaches, take a brief break and after that start finding a way to have a successful 2020.”

The Argos were their own worst enemy this season with untimely penalties, turnovers and letdowns in play. Quarterback was also a problem position. 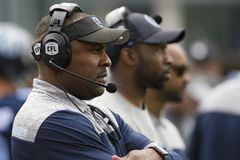 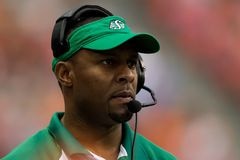 Chamblin set to return to Regina but as Toronto Argonauts defensive co-ordinator
July 28, 2017
Report an error
Due to technical reasons, we have temporarily removed commenting from our articles. We hope to have this fixed soon. Thank you for your patience. If you are looking to give feedback on our new site, please send it along to feedback@globeandmail.com. If you want to write a letter to the editor, please forward to letters@globeandmail.com.
Comments