Finally, some good news regarding a CFL starting quarterback.

Matt Nichols resumed practising Monday with Winnipeg three days after being forced to leave the Blue Bombers’ 29-14 road win over the Ottawa Redblacks. Nichols left in the third quarter with his team leading 22-4 after being hit when he decided against sliding to end an 18-yard run.

Nichols entered concussion protocol and didn’t return. Backup Chris Streveler, who had a rushing touchdown and passing score with Nichols still in the game, finished 6-of-8 passing for 42 yards with a TD and interception while also rushing for two touchdowns.

A good sign was Nichols telling reporters after the game that he felt fine. Nichols was 16-of-20 passing for 262 yards and a TD, and is expected to start Friday night when Winnipeg (3-0) plays host to the Toronto Argonauts (0-3).

Four teams entered action last week without their No. 1 quarterback.

The Calgary Stampeders (2-1) didn’t miss a beat Saturday without starter Bo Levi Mitchell. Sophomore Nick Arbuckle was 19-of-22 passing for 262 yards, and two TDs in his first CFL start as the defending Grey Cup champions beat the Saskatchewan Roughriders 37-10 at Mosaic Stadium.

Cody Fajardo, making his third start in place of the injured Zach Collaros, was just nine-of-16 passing for 89 yards and two interceptions. Fajardo had 790 passing yards and four TDs in his first two starts for Saskatchewan (1-3).

McLeod Bethel-Thompson completed 25-of-33 passes for 303 yards with a TD and interception in Toronto’s 18-17 home loss to B.C. (1-3) on Saturday night. The Argos placed veteran James Franklin on the six-game injured list last week.

ATTENDANCE CONCERNS?: It’s an early-season story that won’t go away.

Through four weeks, only the Roughriders have had a home crowd exceeding 30,000 spectators. On Canada Day, a Mosaic Stadium gathering of 30,121 braved wet conditions and a lengthy weather delay to watch the Riders down Toronto 32-7.

Heading into action this week, the CFL’s average attendance is 23,311, and even that figure isn’t entirely accurate because it’s based on 14 home games. No attendance was provided for Toronto’s home loss Saturday night to B.C.

Given there appeared to be roughly 11,000 fans at the contest, that would’ve dropped the average figure to about 22,490.

Regardless, neither number is flattering, especially considering the CFL kicked of its season on July 13, its earliest start ever. That came after many member centres expressed concern that fans watching games in November have a dramatically lessened viewing experience.

On Monday, the Edmonton Eskimos introduced a general admission pass for $22. The promotion is for tickets purchased before each game day, with the price going to $25 on game day.

The Eskimos will also grant free admission to fans age 17 and younger from now to their Labour Day rematch with Calgary on Sept. 7.

ARGOS’ PLIGHT: The future doesn’t exactly look bright for the Argonauts, which are 0-3 as the CFL’s lone winless team. The Argos’ next three games are on the road against Winnipeg (3-0), Calgary (2-1) and Edmonton (2-1), before returning to BMO Field on Aug. 1 to face the Blue Bombers in what’s hardly an enviable stretch.

But even more frustrating was how Toronto — which was outscored 96-21 in its first two games — lost to the Lions on Saturday night.

B.C.’s winning point came when Sergio Castillo missed a game-ending, 42-yard field goal. But as returner James Rainey corralled the ball, he stepped on the back boundary line to give the Lions (1-3) the single.

It was somewhat surprising that Rainey, not punter Zack Medeiros, was in the end zone — which at BMO Field is 18 yards deep, two less than a conventional CFL field. Regardless, Toronto was in a tight spot because even if Castillo’s kick sailed past the endzone, it would’ve counted for a single point.

However, Toronto contributed mightily to the bizarre ending. After rallying to tie the game 17-17, Argos kicker Drew Brown sent the kickoff out of bounds, giving B.C. possession at its 45-yard line with 38 seconds remaining.

Brown’s errant kickoff wasn’t Toronto’s only special-teams miscue. He also missed a 33-yard field goal late in the first half then the Argos botched the snap on the convert following Rainey’s 79-yard punt return TD that cut B.C.’s lead to 10-9 in the third quarter.

“That [missed convert] was one point we needed and there was another time we missed three,” Argos head coach Corey Chambin said. “All those things, if you look at it, we can come out of here with a victory, we’ve just got to get better in some areas with guys getting better.

“They prep the right way but it has to turn into performance . . . we’re not that strong a team yet to have one or two little instances.”

BLM SAVINGS: Last week the Stampeders put Mitchell on the six-game injured list, prompting suggestions the move would save the defending Grey Cup champions significantly on their salary cap.

The salaries of injured players don’t count against the cap. So with Mitchell signing a four-year deal reportedly worth $700,000 annually this off-season, the simple match suggested significant cap relief for Calgary.

However, only a player’s base salary is exempt. According to a league source, Mitchell’s base salary this season is $335,000, so if he missed all six games that would result in a $112,000 cap saving.

Now, that’s still a lot by CFL standards. But it’s less than half of the $233,333 that Calgary would’ve saved over the same span had Mitchell been earning his entire $700,000 stipend over the course of the regular season.

LAWRENCE HEARING: Hamilton linebacker Simoni Lawrence is scheduled to meet with an arbitrator Tuesday regarding the suspension the CFL levied against him last month.

The league suspended Lawrence for two games after he hit Collaros in the head during Hamilton’s season-opening 23-17 home win over Saskatchewan on June 13. Lawrence received a 25-yard roughing-the-passer penalty on the play.

Collaros didn’t return to the game and went on the six-game injured list shortly afterward. A repentant Lawrence said he didn’t mean to hurt his former teammate. He appealed the suspension and was able to continue playing leading up to the hearing.

The 6-foot-1, 231-pound Lawrence, in his eighth CFL season and seventh with Hamilton, has a team-high 20 tackles with two sacks and two interceptions.

The CFL is hopeful the arbitrator can render a decision before Saturday when Hamilton plays host to Calgary. 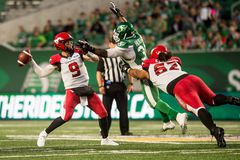 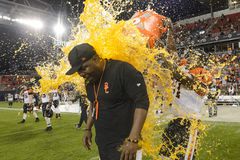 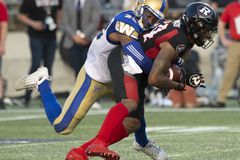