All signs were pointing to Zach Collaros remaining the starting quarterback for the Winnipeg Blue Bombers in the playoffs.

Collaros and Chris Streveler both participated in Wednesday’s practice, but Collaros took the first-team reps as the squad began getting ready for Sunday’s CFL West Division semi-final in Calgary against the Stampeders.

“I’m going to prepare like I’m the starter and we’ll see how the week progresses,” said Collaros, who didn’t wear gloves on the cold day.

Streveler admitted to not being fully healthy.

“Just getting better day by day,” said Streveler, who hasn’t played since injuring an ankle in a 37-33 loss to Calgary Oct. 19. “Just taking it one day at a time.”

As expected, head coach Mike O’Shea was non-committal about who’d be at the quarterback controls.

“They all took meaningful reps so we’ll figure it out as we go on,” he said.

Collaros is coming off a memorable debut with the Bombers after being acquired at the trade deadline Oct. 9 from the Toronto Argonauts.

The eight-year veteran guided the offence down the field late in the fourth quarter and Justin Medlock booted a 34-yard field goal as time expired for a 29-28 victory at home against the Stampeders Oct. 25.

Collaros, 31, began his eighth CFL season with the Saskatchewan Roughriders, but suffered a concussion during the first drive of the team’s season-opening loss to Hamilton on June 13. He was traded to the Argonauts in late July and never got into a game.

Winnipeg acquired him as insurance after starting pivot Matt Nichols had season-ending surgery in late September on a shoulder he injured in August.

The Bombers ended the regular season with a bye week and Collaros used the time to study.

“Just being able to keep combing through the playbook and being able to ask the coaches questions about why we call this that and what is this guy’s responsibility, what if this happens from a coverage standpoint – all those things, all that stuff’s invaluable for me right now,” Collaros said.

“I mean it always is, but when you’re playing catchup, it definitely is.”

The Bombers (11-7) won the season series 2-1 against the defending Grey Cup champion Stampeders (12-6), with the home teams the victors.

Collaros and Streveler offer the Bombers a duo with throwing and running strengths.

“It certainly brings a different feel to the offence when you have different things available,” O’Shea said. “And, as noted before, Streveler did a fair bit to put us in position to win games.”

The weather forecast for Sunday’s clash in Calgary is calling for a high of minus 12 degrees, which means Bombers running back Andrew Harris could be tapped for a lot of touches.

Harris won the league rushing title for a franchise-record third straight season. He racked up 1,380 yards off 225 carries in 16 games. Saskatchewan’s William Powell was second with 215 carries and 1,093 yards in 18 games.

Harris was named a West Division all-star Wednesday, a week after he didn’t get enough votes to represent the Bombers for league awards in either the most outstanding player or most outstanding Canadian categories.

Four members of the Winnipeg chapter of the Football Reporters of Canada and O’Shea got votes. Voting isn’t usually public, but three reporters said they didn’t vote for Harris because he’d been suspended for two games in late August after testing positive for a performance-enhancing drug. One reporter did vote for him.

O’Shea said Wednesday he cast his vote for Harris.

“I’ve gone on record saying I believe it was accidental,” O’Shea said of Harris’s claims an over-the-counter, natural men’s energy supplement he took must have been contaminated.

The CFL doesn’t have a rule on whether failing the league’s drug policy makes a player ineligible for an award, which is the rule for some sports leagues such as the NFL.

“In the middle of the process is not the time to try and change it. That’s what the off-season is for,” O’Shea added.

Harris sent “big kudos to my teammates, coaches, family” for the sixth all-star selection in his 10-year career.

However, when asked “how big of a deal” it was that he didn’t get enough votes for the league awards, he abruptly ended the media session.

“Talk to these guys,” Harris replied as he ducked down and walked away through reporters. 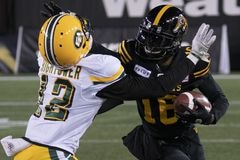 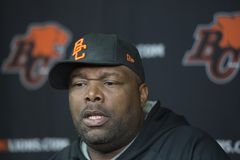 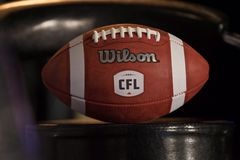