Denver is no longer Tom Brady's House of Horrors and the Broncos sure don't scare anybody anymore.

"It's always hard to win in the NFL, certainly on the road," Brady said. "We found a way to do it last year and we're off to a good start this year."

Not so the Broncos.

These teams have represented the AFC in the last four Super Bowls, and the Broncos (3-6) were hoping a visit from their rivals would help shake them from their funk. Beat Brady, suggested Aqib Talib, and "the swag, the energy in this locker room, it'll skyrocket."

Instead, the Broncos fizzled.

They lost their fifth straight game, their worst skid in seven seasons, and they dropped back-to-back games to the Patriots (7-2) in Denver for the first time since 1966.

Avoiding Von Miller all night and throwing for 266 yards on 25-of-34 passing, Brady improved to 8-9 against the Broncos, the only team he has a losing record against, and he won for just the fourth time in 11 trips to Denver.

Speaking of historic, the Patriots for the first time since 1979 had a special teams takeaway , a blocked punt and a kickoff return for a touchdown , a trifecta that fueled a comfortable 27-9 halftime lead.

Indeed, it was his fifth fumble, including four muffs.

"It puts us in a big hole," McKenzie said. "I put the blame all on me. If I would've caught that first punt, did anything with it, besides turn it over, then probably ... things would've changed for us."

The Patriots had five touchdowns and a pair of field goals before they'd punt again.

"We knew McKenzie had muffed a couple so we told our gunners to get down there and make it tough on him," Patriots DB Devin McCourty said. "Then we get the blocked punt return."

He's getting ahead of himself, but who could blame him?

After kicking a 39-yard field goal, Brandon McManus failed on the ensuing kickoff to get in front of returner Dion Lewis, whose 103-yard return down Denver's demoralized sideline made it 14-3.

"How are you supposed to win against Tom Brady and Bill Belichick and the New England Patriots when you're starting off" like that? wondered Broncos defensive end Derek Wolfe. "You can't."

Then, Burkhead sliced through the line to block Riley Dixon's punt at the Broncos' 30-yard line, leading to Stephen Gostkowski's second field goal and a 20-6 lead.

"I have not," Broncos coach Vance Joseph replied when asked if he'd ever seen a worse special teams performance. "That wasn't the only issue we had. We were 1 for 4 in the red zone. We moved the ball better tonight but we didn't score touchdowns. And defensively they scored on seven straight possessions."

When the Broncos finally forced another punt in the fourth quarter, they were whistled for 12 men on the field, giving the Patriots a fresh set of downs. Brady took advantage of that gaffe by throwing a 6-yard touchdown pass to James White, capping both the blowout and a 16-play, 94-yard drive that ate up more than seven minutes.

"Besides that first series, we couldn't stop them," Miller said.

BROCK ON: Brock Osweiler hooked up with Emmanuel Sanders five times for 114 yards in the first half but Denver stalled twice in the red zone and also at the Patriots 21, settling for field goals while the Patriots were scoring touchdowns. Sanders finished with six catches for 137 yards.

"We're going to watch the tape tomorrow as a staff and determine who the quarterback is next week," Joseph said.

BENNETT'S BACK : Tight end Martellus Bennett was active — and productive — for New England just a few days after he accused the Green Bay Packers of pressuring him to play through a shoulder injury. Green Bay waived Bennett with the designation that he "failed to disclose a physical condition," but Bennett said the Packers were aware of his balky shoulder when they signed him. He said it got worse during the season and he elected to have surgery. When the Packers waived him, the Patriots grabbed him.

His first catch covered 27 yards and he finished with three catches for 38 yards.

"He did a great job to have come in on Friday," Brady said. "I love having Martellus on our team. He adds a lot, he's a great player, and he was for us last year."

MILESTONE WIN: Belichick moved into a third-place tie with Tom Landry on the all-time head-coaching list for wins, with 270. He trails only Don Shula (347) and George Halas (324).

INJURIES: Patriots special teams ace Matthew Slater went out in the first half with a pulled hamstring.

Broncos tight end A.J. Derby was knocked out with a shoulder injury.

Umpire Jeff Rice was carted off in the third quarter after hitting his head on the ground when Patriots linebacker Trevor Reilly bowled him over on during a Denver punt. 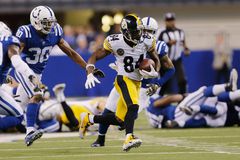 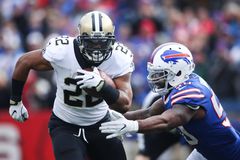