The Buffalo Bills have "postponed" their 2014 regular-season game in Toronto, as the future of the series appears in doubt.

In a joint statement released Wednesday by the NFL club and Rogers Media Inc., the series partners said they have "postponed for one year" the Toronto event in order to "evaluate opportunities to enhance future games."

Russ Brandon, president and chief executive officer of the Bills, said management decided to step back and evaluate the situation after the 34-31 overtime loss to the Atlanta Falcons at Rogers Centre on Dec. 1, which sparked questions about whether the team loses home-field advantage playing in Canada.

The announced crowd – which included a large number of Falcons fans – of 38,969 was well short of the stadium's NFL capacity of 46,470 (not including suites).

However, in speaking to reporters Wednesday, Brandon opened the door to the outright cancellation of the series.

"We're going to go through a detailed full analysis. Most of our analysis that we've been through over the past few months has been more top line," he said. "We're going to look at every aspect that, if we do come back, we have a more robust fan experience and try to create more of a home-field advantage for us.

"Right now, that was not the situation and that was one of the reasons we'd rather get into a lot of detail with our partners up there and see if that's viable moving forward."

The Bills have played regular-season games in Toronto in each of the past six years, and are 1-5 since the series began. The partners previously announced a five-year extension that would carry the series through 2017.

Brandon has said Toronto is a "challenged market" that hasn't yielded enough wins for the team.

"Everything is about winning. The only thing I care about is winning and this whole organization is set up in that capacity," he said Wednesday.

The joint statement also said a sponsorship agreement would give Canadian fans "visibility and access to the Bills," including a "Canada House" that will play host to pregame tailgate parties for those attending home games at Ralph Wilson Stadium.

The Bills made the decision to play games in Toronto, about a two-hour drive from Buffalo, in a bid to expand their fan base and generate additional revenue from Canada's largest city and financial capital. But a lack of gameday fan support and poor attendance have been issues since the series started.

However, the series did lure Southern Ontario fans back to Buffalo. The Bills estimate Canadians now make up about 15 per cent of their season-ticket base, which rivals the number of season-ticket holders the Bills get from nearby Rochester, N.Y.

"Regionalization is a key lever for us moving forward and Toronto and the Southern Ontario marketplace will continue to be that, just like Rochester is for us," Brandon said.

Toronto Councillor Doug Ford called Wednesday's announcement "disappointing." He and his brother, Mayor Rob Ford, are football fans and have spoken about bringing an NFL team to the city in the past.

"We love the CFL, and if the NFL team comes, that's even an added bonus," Doug Ford said Wednesday. "We look forward one day to getting an NFL team here."

MacLeod: Toronto a good fit for everybody but the Bills
December 2, 2013
Shoalts: MLSE outlines plans for stadium renovation, with eye on NFL team
January 29, 2014 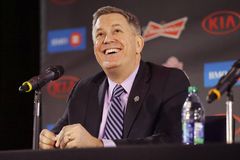