Luke Willson has shown the Toronto Blue Jays that he can crush baseballs into the third deck of the Rogers Centre. But the 6-foot-5, 250-pound Canadian has also been using that raw power to explode off the line of scrimmage and haul in touchdown passes at Rice University, drawing interest from the NFL.

The left-handed slugger from La Salle, Ont., was on the 2008 Canadian junior baseball team, where he hit cleanup in front of Brett Lawrie and worked his swing until his hands bled. He even signed a free-agent deal with the Toronto Blue Jays and went to extended spring training. But he has also been turning heads as a tight end at Rice. Now, many expect the 23-year-old will be picked in this week's NFL draft, which starts Thursday.

Willson was the third of four children for Mike and Wilma. All were talented athletes – twin brothers Greg and Eric were two years older than Luke; sister Rachel was three years younger.

Luke played every sport under the sun, hungering to keep up with his older brothers. He was a standout in preschool soccer, and a first-grader who begged to go on long cross-country runs with the Grade 3 kids. He played Triple-A hockey, baseball, football and any high-school sport he could squeeze in. The family van was constantly shuttling between sports.

"I was that little kid who looked up to his big brothers," Willson said. "I remember being too short to go on the roller coasters they could go on or not old enough to be on the teams they joined. Whatever they played, I wanted to play it too. I think it really drove me."

While the rest of his family pulled for the Green Bay Packers, Willson was devoted to the Detroit Lions, captivated by the elusive Barry Sanders. There was plenty of football in the Willson family yard, led by their dad, a former player at the University of Windsor.

"Luke was extremely competitive from the get-go, even if we were playing Crazy 8's or Monopoly, he had to be winning," Mike Willson said. "We were never a family who insisted you had to win. We just wanted to have fun. But he loved to compete and be part of a team. He went on to be a captain nearly every place he played."

The Willson brothers played high-school football together and also for the Essex Ravens of the Ontario Varsity Football League. While his brothers wound up at the University of Western Ontario, Rice University took notice of Luke, then a standout slotback.

"He was a tall, very slender player at the time, but we knew his upside was tremendous by watching his film, because he was so athletic," said David Bailiff, head football coach at Rice. "Our only fear was that he was going to play for the Canadian baseball team, and we worried he was going to be so good at that too, that he might choose baseball and never make it here."

Once he got the offer from Rice, he quit playing high-level hockey, but not baseball, and the Canadian junior team recruited him. Head coach Greg Hamilton remembers Willson hitting long after practice, and early before others would arrive, his hands once covered in bleeding blisters he wrapped with hockey tape.

"I asked him if he wanted to give his hands a break, but he said 'I'm fine, I need some more work on my swing,'" Hamilton said. "His hands were as beat up and raw as you can imagine, but he had that tough football player's mentality and would seize every opportunity he had to get better. "

"The experience definitely drew me back into baseball because it was so much fun, and I met so many guys," Willson said. "For a while after the worlds, I thought I was going to play just baseball. But I chose to take the Rice offer and play football and get my education."

Willson showed up in Houston thinking he could play both college baseball and football at Rice, but soon found out how difficult that was. He hadn't started out in football playing with a hand on the ground like American high-school tight ends. He was a slotback from a wide Canadian field, used to that running start toward the line of scrimmage. While his 220-pound trim build suited him well to swing a bat, he was too slim to be a college tight end.

"I came to Rice light in weight and had to make up for lost time in the weight room," Willson said. "These American kids were lifting weights pretty seriously in high school, but I was just a guy who played a lot of sports."

It took a while, but Willson packed on the muscle over his first two years at Rice, helping him excel as a sophomore and a junior. He made 62 catches for 738 yards and six touchdowns combined over those two seasons, and the Toronto Argonauts picked him in the fourth round of the 2012 CFL draft, knowing he would an NFL draft prospect in a year.

During that time, the Blue Jays also invited him for a workout in Toronto, despite the fact that he hadn't swung the bat much in two years outside of a little summer-league baseball in Texas.

"He hit one ball into the third deck, and a few home runs to centre field after not really picking up the bat much in a few years," Andrew Tinnish, Blue Jays assistant general manager, said. "What stood out for us were his power and his athleticism. He's very raw and hasn't played a lot of baseball, but when you have someone who has a great makeup like that, works hard and has terrific raw ability, we'll take risks on those types of players."

Willson did extended spring training in Dunedin, Fla., last May, but then focused on his senior football season and a future in the NFL. He struggled with an ankle injury, which limited his production. He played in only six games, catching nine passes for 126 yards and two touchdowns, but helped Rice to a bowl game. He then went for two months of intensive football training in Florida.

He was invited to the NFLPA Bowl, where he caught three passes for 46 yards and a touchdown. Then at Rice Pro Day, before scouts from some 30 NFL teams, he posted the kind of numbers that could rank him among the top tight ends in the draft, running the 40-yard dash in 4.57 and 4.46 seconds, and recording a 38-inch vertical jump. He is the 18th ranked tight end in CBSSports.com's draft rankings.

"He ran really well for the pro scouts, and that really piqued their interest," Bailiff said. "Because he was injured a little this season, they didn't know what to think about him until they saw him run that well and saw his size and speed up close."

Since then, Willson has been invited to a handful of individual workouts for NFL teams. Many draft experts laud his size, speed, blocking and good hands, projecting he'll be picked on the final day of the draft. Willson says he'll be home with his family in La Salle, hoping for a call. For now, football is his top choice, but if it doesn't work out, the Jays would be willing to talk.

"It has been tough to decide between football and baseball, and I never wanted to have any regrets," Willson said. "Definitely football is my top priority, and while no one can be 100-per-cent sure they will be drafted, I do believe my name will be called." 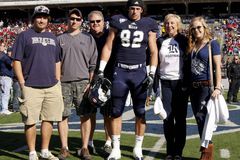