During Grey Cup week, Rodd Sawatzky and Herbie Kuhn will provide something as important to many of the players as coaching, medical treatment or pregame speech.

They are not coaches, doctors or sports psychologists. They are team chaplains, Sawatzky for the Calgary Stampeders and Kuhn for the Toronto Argonauts. Their role for the Grey Cup finalists during this pressure-filled week includes Bible study, a game-day chapel and one-on-one conversations with many players, all with the goal of giving a providing them comfort and confidence.

Sawatzky and Kuhn are ready for anything this week – much as they are during the regular season. They may need to counsel a player with personal struggles, comfort an injured one leaving the field, or answer a call in the middle of the night.

Every CFL team has a chaplain who is not a staff member, but rather a member of the faith-based group Athletes in Action, which provides chaplains to many sports teams. While the chaplains have a Christian background, and most who choose to attend chapel or Bible study are of Christian faith, players and coaches of all beliefs are welcome.

"The CFL is a small league and there is a strong sense of Christian fellowship within it, and it's important to a good number of people," Sawatzky said. "The chaplains in the CFL … understand the pressures of athletes. We're not members of the coaching staff. We're just here to serve the players and staff."

Sawatzky has been the Stamps chaplain for 12 seasons. He has a biblical-studies degree but is not a pastor of a church. He was an elite basketball player and felt sports ministry was an ideal job for him. He also acts as chaplain to the NHL's Calgary Flames and the city's pro lacrosse team, the Calgary Roughnecks.

The chaplains use scriptures and faith to help players cope with things such as injury recovery, marriage struggles, or the deaths of family members or friends. Last year, Sawatzky played a big role in helping the Stampeders cope with the shooting death of their teammate Mylan Hicks. The week of the big game can present family stresses, or game-day anxieties. It may bring about uncertainties for players who don't know what's next in their careers after the final whistle on Sunday.

"I grew up in the church, both my parents were pastors and built the church from the ground up, so my No. 1 thing when I came to this league was where am I going to go to church," Stamps defensive back Jamar Wall said. "Some veteran players told me about the game-day chapel here. The minute I heard Rodd speak, I said to myself: 'I'm going to be okay here.'"

On Sunday morning, six hours before playing in his first Grey Cup, Argonauts star running back James Wilder Jr. will meet some of his team in a quiet room of the hotel and eagerly await Kuhn's game-day service.

"It's a must for me, a vital part of my preparation," said Wilder Jr., who was chosen the league's top rookie on Thursday night. "We have a lot of pressure this week, a lot of media to do, a lot of attention, there is a lot going on. But when I walk out of chapel, I will feel refreshed and ready to play. I want to go on the field clear-minded."

"I open with a prayer, then a message that's 12 to 15 minutes long – this Sunday it may be about finishing what they started some 22 weeks ago," said Kuhn, who is the PA announcer at Toronto Raptors home games and is also the Raptors chaplain and Athletics Canada's chaplain.

"Then we all stand and join hands and I or one of the players will close in prayer. They leave there pumped up, and emotionally and spiritually stimulated."

Kuhn's midweek Bible session and his game-day chapel have been important to the rookie running back during his first season in the CFL after stops in the NFL.

"Besides talking to my family, this is who I talk to. We feel comfortable telling personal stories to this group of guys in a Bible study, knowing we won't be judged," Wilder said. "Some of the players who are American didn't have anyone else here in Canada to talk to when we got here. Herbie is our chaplain and our counsellor."

The relationship between the CFL and Athletes in Action goes back about 40 years.

Many of the team chaplains travel to Grey Cup every year – regardless of who is playing – and do community-outreach events alongside CFL players at places such as missions, schools or youth-detention centres. Athletes in Action holds a large breakfast event each year on Grey Cup weekend, which many CFL players attend.

It's not about praying for a win; players make that clear.

Many look to their team chaplain for insight, and unconditional support in the fast-changing world of professional sports that constantly asks "what have you done for me lately?"

"Herbie will talk over lunch with a lot of players this week; he will be an ear for many of us," Argos backup quarterback Cody Fajardo said.

"Everywhere I've played, I've confided in the chaplain. I personally pray for safety and for the ability to play my best, but I'm not one to ask God for a win."

During the game, Sawatzky will be on the sidelines, and Kuhn will be in TD Place Stadium somewhere, too. They may need to comfort an injured player being taken to hospital or share a quick word with a player who needs calming.

They may also lead the postgame prayer at centre field when some players from both teams will circle up on one knee, and gather arm in arm in prayer after doing battle. Even as confetti is falling when Sunday's game ends, and one team is jubilantly celebrating while the other is crushed, some combatants will pray together. 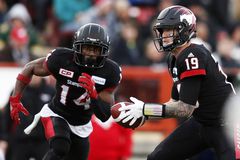 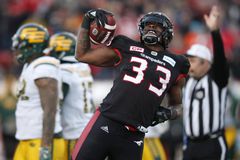 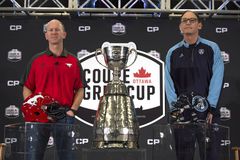