The Labour Day games in Hamilton and Calgary mark the traditional midway point of the CFL season. While there have been excellent games – the Montreal Alouettes- B.C. Lions Grey Cup preview last Friday was a cracker – the season so far has been noteworthy for a shortage of dynamic story lines. In particular, the absence of young star power and special events is hobbling the CFL in an era in which TV craves celebrity.

Nothing illustrates this better than the Toronto Argonauts cutting the league's leading rusher seven games into the season. Cory Boyd may have had it coming, and running backs are somewhat dispensable in the CFL. But how do you build brand awareness with fans of the league when one of the signature players in the CFL can be cast aside like a practice squad player? Or when the Winnipeg Blue Bombers fire head coach Paul LaPolice in midseason after getting the Bombers to the Grey Cup game last fall?

The TV ratings thus far reflect the ennui with a league whose best player, arguably, is still 40-year-old Anthony Calvillo of the Alouettes. Going into the Labour Day games, TSN's ratings were up just 3 per cent over last year. Despite an improvement this season in Toronto, still a ratings driver for the CFL, adults in the 25- to 54-year-old demographic are up 14 per cent compared to last season when the CFL had a significant falloff of almost 100,000 viewers a game.

There have been extenuating circumstances: The Olympics bumped CFL news to the back pages for two weeks at the start of August. The Saskatchewan Roughriders, which also drive ratings, have been bad again this year. Season-ending injuries to key players such as Drew Tate of the Calgary Stampeders have removed the potential for a young star emerging.

The league has always been transient, but when we look at this season's CFL, can we identify a future Hall of Famer under 30? If you're buying a CFL jersey in Toronto, Winnipeg or Edmonton, what name would you put on the back? And how long till that jersey was out-of-date?

The league has put enormous energy and stock into the 100th anniversary of the Grey Cup game this November in Toronto. Good for it. But you have to bring the market to that big moment. As the TV ratings shows, the lead-in for the Grey Cup has been underwhelming fans thus far.

As we have seen in the NFL, NBA and even NHL, TV is about special events such as NBC's Sunday night NFL game or the NHL Winter Classic. The CFL has its Grey Cup train, but it's still counting on the traditional Labour Day rivalry games between the Argos and Hamilton Tiger-Cats and the Edmonton Eskimos and Stampeders to market the league.

In today's attention-deficit market, that's not enough any more. Big stars and special events now sell TV sports. In concert with its exclusive broadcaster, CFL commissioner Mark Cohon needs to engage a little special something during the year to get viewers back to their TVs.

Speaking of rising young stars, Milos Raonic might be the hottest Canadian athlete at the moment. Sportsnet has been riding his coattails with its tennis coverage and TSN has its chance with the power server from Thornhill, Ont., during the U.S. Open. But TSN's telecast of Raonic's destruction of American James Blake last Saturday is probably one the network would like to forget.

TSN has no staff on site at the National Tennis Center in New York, instead using U.S. and international feeds to cover the event. Still, TSN host Bryan Mudryk told the audience they'd get the entire Raonic match, which was being played on a back court and was not the feature match at the site.

After a brief episode with no announcers, all seemed fine in the first set as the Tennis Channel feed, including announcers, showed Raonic rolling to a 6-3 win. But then things came unstuck as coverage went to the main Arthur Ashe Stadium court for American Sloane Stephens's match, leaving Canadian fans searching for their homeboy. Nothing onscreen indicated what was happening.

After what must have been some scrambling at TSN headquarters, someone found the international feed of the Raonic match. Without announcers. And so it remained for the rest of the three-setter with just the natural sound of Raonic's booming serves and the pro-Blake crowd.

TSN spokesman Greg McIsaac told us, "In order to bring Canadians complete coverage of this historic match, we intentionally broke away to use a court feed without commentary while the originating network was court surfing. The crowd and the atmosphere were fantastic, allowing the lack of voiceover to work." Nice try but, uh, no.

TSN was victimized by its broadcast partners. But even for those who think tennis announcers talk too much, having no announcers for the last hour-plus of a featured Canadian at a major was unacceptable. Maybe Jim Van Horne, who called the London Olympic tennis from monitors in Toronto, should be kept on hand in case it happens when Raonic meets Andy Murray in the fourth round Monday. 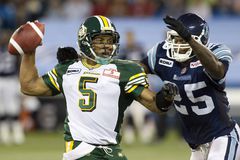 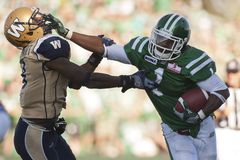 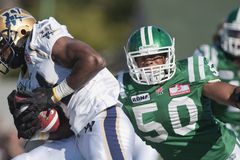 Eskimos sign running back Messam to extension through the 2014 season
September 1, 2012 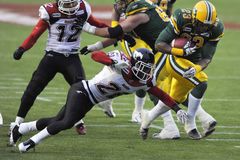 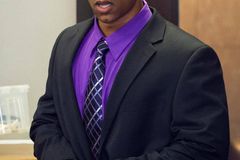 Whitaker and Calvillo lead Alouettes to win over Lions
August 31, 2012