The Hamilton Tiger-Cats are now on the clock.

The CFL announced Thursday it would approve a contract for quarterback Johnny Manziel if one was negotiated with the Hamilton Tiger-Cats, who have the former Heisman Trophy winner on their negotiation list. The Ticats now have 10 days to make an offer to Manziel in order to maintain his rights or trade him to another team.

If Manziel doesn't receive an offer from Hamilton or isn't dealt by Jan. 7, 2018, he'll become a free agent. But worth noting is Hamilton simply has to make an offer to Manziel and if it's rejected, he'd remain on the Ticats' negotiation list for another year.

Similarly, any team acquiring Manziel's rights from Hamilton would then have a 10-day window to make him an offer. And as is the case with the Ticats, if Manziel turned that down, the new club would be able to keep him on its negotiation list for another year.

In August, Manziel worked out for the Ticats, who passed on making him an offer. But Manziel's camp activated Hamilton's 10-day window, forcing the CFL club to make a decision on whether to sign or trade him.

The CFL then stepped in and extended the window for further evaluation.

The following month, Manziel met with commissioner Randy Ambrosie to discuss a resolution, which included Manziel having to fulfil certain requirements to join the league. Shortly afterwards, the CFL announced the Ticats would hold Manziel's rights until Nov. 30 before extending it again into January to continue with its due diligence.

"As a result of this process, the commissioner has now informed Mr. Manziel and the Tiger-Cats he is prepared to approve a contract for Mr. Manziel should one be negotiated," the CFL said in its statement. "The process that led to this decision does, however, will continue.

"Mr. Manziel has been informed he must continue to meet a number of conditions in order to remain eligible. These conditions, while extensive and exacting, remain confidential."

Teams can have up to 45 players on their negotiation list, giving them exclusive CFL rights to those listed. Players can be added, removed or traded from the list at any time.

Manziel has been on Hamilton's negotiation list pretty much since his days at Texas A&M.

The 25-year-old captured the Heisman Trophy in 2012 and was selected in the first round, No. 22 overall, in the 2014 NFL draft by the Cleveland Browns. But following two tumultuous seasons, the Browns released the Tyler, Texas, native in March 2016 after he posted a 2-6 record as their starter.

Manziel has been out of football since.

"We appreciate the CFL office and commissioner Randy Ambrosie's due diligence in this matter," the Ticats said in a statement. "We also recognize Johnny Manziel for thus far demonstrating the attributes necessary to continue his career in our great league.

"We will have no further comment at this time."

"I think he'd be the best player to ever play up here," Jones said. "He can throw it and he can run it like nobody ever has been able to do."

Hamilton (6-12) finished third in the East Division last year and missed the CFL playoffs. The Ticats were 0-8 under starter Zach Collaros before Kent Austin resigned as head coach and was replaced on an interim basis by Jones.

Jones' first move was to promote backup Jeremiah Masoli to starter, and the former Oregon Duck helped Hamilton post a 6-4 record the rest of the way. Collaros remains under contract — reportedly at over $500,000 — for 2018 but both Masoli and youngster Everett Golson are slated to become free agents in February.

The prevailing sentiment this off-season has been that Collaros's days in Hamilton are numbered given his lofty stipend.

But if the Ticats are looking to deal Manziel's rights, they could have a willing trade partner in the Montreal Alouettes. The Als posted a league-worst 3-15 record this year with veteran quarterback Darian Durant throwing more interceptions (16) than touchdowns (15).

The Alouettes reportedly had an interest in Manziel earlier this season, and it was Montreal head coach Mike Sherman who convinced Manziel to play at Texas A&M after he'd verbally committed to Oregon coming out of high school. Sherman was the Aggies head coach at the time.

CFL could approve Manziel deal next year if he meets ‘certain conditions’
September 27, 2017 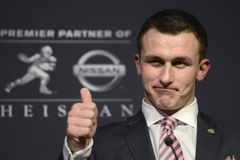 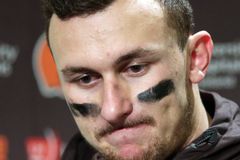