Geroy Simon is leaving the CFL a changed man.

In 1999, he joined the Winnipeg Blue Bombers feeling individual success would get him back into the NFL.

On Wednesday, Simon retired as the most prolific receiver in CFL history, but he says the three Grey Cup championship titles he shared with his teammates are the crowning achievements of his illustrious 15-year CFL career.

"Hands down, those are the three most important times in my career and my most cherished accomplishments," Simon said. "When I first got here, winning wasn't that important to me, it was my individual success.

"I think the maturity of being here and evolving as a person, as a player with a few great organizations switched my thinking to where it stopped being about my individual success as opposed to winning games and winning Grey Cups."

Simon, 38, twice played for teams that won Grey Cups at home – the 2011 B.C. Lions and last year with the Saskatchewan Roughriders.

"It's an amazing feeling to win a Grey Cup at a neutral site," Simon said. "But to win at home twice, not too many people can come close to that.

"I feel very privileged to have done it." Then again, being the most prolific receiver in CFL history isn't shabby, either.

Simon shouldn't be out of football long. He's talking with the Riders about a front-office job as a club ambassador.

Simon, who spent part of the '97 season on the Pittsburgh Steelers' practice roster, spent two seasons with Winnipeg before signing as a free agent with B.C. It was with the Lions that Simon – nicknamed Superman for the pose he'd strike after scoring TDs – became a CFL star.

But the Lions dealt Simon to Saskatchewan on Jan. 24, 2013 for receiver Justin Harper and a 2014 third-round pick. After missing the Riders' first three regular-season games due to injury, Simon finished with 40 catches for 565 yards and three TDs and surpassed Ben Cahoon (1,017) as the CFL's all-time receptions leader.

However, that Grey Cup win was much different than Simon's first two. With B.C., he was a focal point of the offence whereas with Saskatchewan he was a mentor for the youthful Riders.

"I still believe I made a huge contribution (with Riders) but it wasn't stats," Simon said. "It was more in the background, in the locker-room helping mentor guys, helping them get to the right spots and get better.

"You can't measure those by stats. But to have the opportunity to catch two touchdown passes and win the game in that manner, it was really special to me."

Simon was prepared to return for a 16th season before noticing some subtle hints it was time to retire.

"Even though I wanted to play, my preparation was quite different than any other year because I was busy doing many other things," Simon said. "I'd miss a workout here and there and there'd be times where instead of going my normal two hours in the gym I'd go for an hour. It was just different.

"Now, I would've been able to get to training camp and play at a high level, but I think karma has a way of working its way out. Things happen for a reason and I think I was just prepared physically and mentally to move on."

Simon finalized the decision to retire about two weeks ago while visiting Rome with his wife.

"We talked and I said, 'Maybe it's just time to move on,"' he said. "She was more concerned than I was.

"I didn't want to get to a certain point where I tarnished my legacy on the field with mediocre play or frustration at the end of my career because that would leave a sour taste in my mouth. I left a place that was so good to me for a number of years and went somewhere that was a heated rival. To win a Grey Cup in that place, I felt vindicated, like my career had come full circle and it was time."

Simon admitted leaving B.C. was difficult. He and the Lions had mutually agreed to the trade to Saskatchewan after the Lions indicated Simon's role would change in 2013.

However, Simon said his longtime association with B.C. GM Wally Buono made his transition easier.

"In the end it's all about business," Simon said. "The B.C. Lions made a business decision so I had to do that for my business, the Simon business.

"It was easy for me to move on because I didn't take it personally. I learned from the best in Wally. He takes all the emotion out of it, that's a learned skill. I was around him enough to know it's not personal, it's just business."

"Very proud, very proud of him," Washington said. "A kid from Johnstown, Pa., goes to the University of Maryland and now is the all-time leading everything in the CFL when it comes to receiving.

"He had an awesome career — a storybook-type career. For him to go out as a champion, it's fitting."

"He was just a perfect professional in my opinion," Phillips said. "He taught me the ropes and helped me become a better DB.

Simon will be eligible for selection into the Canadian Football Hall of Fame in 2017. So will former Montreal quarterback Anthony Calvillo, who retired earlier this off-season as pro football's all-time passing leader.

It would only be fitting if the CFL's all-time leading passer and top receiver were inducted together.

"That's actually awesome, I never thought about that," Simon said. "Anthony Calvillo is a legend in this league, a great example not only for myself but also younger players in this league to aspire to be.

"He was a consummate professional throughout his career. He'd be very deserving of going into the Hall of Fame and if we have that opportunity to go together, I'd definitely be honoured." 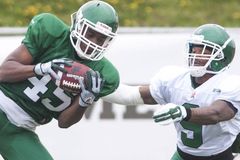 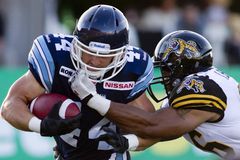 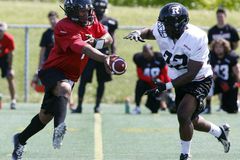