Robert McCune remembers watching Conan the Barbarian on TV as a nine-year-old, marvelling at Arnold Schwarzenegger's ripped physique and taking to the floor during every commercial break to fly through a furious set of push-ups.

Today, at 34, McCune is sculpted like a chiselled warrior himself, looking like a super hero among mortals as he works out in a crowded weight room at the University of Toronto Mississauga campus. Students double-take at the intimidating 6-foot-1, 235-pound linebacker teammates call "Hammer," as he burns through a set of triceps exercises, muscles ripping through his clinging navy Toronto Argonauts shirt. After a stint in the U.S. Army, some college football at the University of Louisville, and four seasons in the NFL, McCune is one of the CFL's leading tacklers.

He is in his fourth season in Canada and one of few holdovers from last year's Grey Cup-winning Argos defence.

The native of Mobile, Ala., has always found creative ways to shape and maintain his build, from power-lifting rocks or heavy rucksacks while stationed in the deserts of Kuwait, to running up cliffs or rowing boats while training clients as part of his Atlanta-based fitness business. YouTube is full of videos posted by McCune's trainees, the linebacker demonstrating some gruelling exercise as an awe-struck, iPhone-yielding client whoops and cheers.

"People call me and say, 'I want to look like you and train with you.' And I say, 'You got to start from the bottom and be real consistent, I've been doing this a long, long time,'" said McCune, whose photo has appeared in fitness magazines. "I take pride in it. I don't measure body fat or keep a journal. If I train as I plan for myself and eat really disciplined, I know it will work out. I just get out and grind.

"One of my clients texted me so excited that she is losing weight and fitting into a pair of pants she hadn't worn in a long time. That's real rewarding for me."

Many of his family members have been complimented on their muscle tone, McCune says. His mother was very lean. As a boy, he eyed his father's strength – a muscular military man and a mechanic, too, who used to pull motors out of cars with his arms, and make his arm and chest muscles bulge and dance to amuse his young son.

When the talented young football player didn't draw interest from colleges, he, too, went the U.S. military route, right out of high school, hoping it would some day help finance a college degree. McCune worked as a fuel specialist, in charge of filling up the various vehicles while serving in Afghanistan, Kuwait and South Korea. He often passed his time in military weight-lifting competitions.

"When I first started, basic training was so much hollering and screaming and hard work all day, every day, I thought, 'What am I doing here?'" McCune said. "But in the military I learned a lot about discipline and respect and I found my own ways to stay in shape for football. I lifted rocks and boulders or sand bags, I did push-ups with a rucksack on my back or I would find a tree out in the woods and do pull-ups on tree branches.

The military did help with financing for college, and so McCune served in the National Guard, got his BA in physical education and played U.S. college football at the same time, often racing back from overnight military drills at Fort Knox in Kentucky, and changing right into his Louisville uniform for a Saturday game.

The Washington Redskins drafted McCune in 2005, and he bounced among various NFL teams until 2009. Then-Baltimore Ravens defensive co-ordinator Rex Ryan once told the Baltimore Sun: "McCune took his shirt off, and it was ridiculous how he could look like that. I called him Hercules from that point on."

The physique has always been an attention-grabber. Argonauts linebacker Marcus Ball recalls the day McCune first walked into a players' meeting in 2012.

"There was a sudden silence in the room, like he caught everybody's attention just by walking in, surprising everyone with all those muscles," Ball said. "His demeanour was real mean-looking. When you see him, he can intimidate you, but he's a very cool dude, very nice and respectful. But when you speak of body structures in football, guys who look physically-imposing, he's one of the first names – if not the very first name – that comes up."

While McCune maintains his strength with moderate workouts during the season, he goes full-bore in the off-seasons in Atlanta, alongside clients at the gym in his home or by running up nearby Stone Mountain. He often loads up his truck with vests and weights and does military exercises with clients or takes them rowing. He beams when describing one of his toughest off-season exercises yet – speeding up the stairs of a local football stadium laterally while wearing a 20-pound weight vest and carrying a 95-pound dumbbell on his shoulders.

Many an interviewer or an onlooker has asked him if he uses steroids. He calls that stuff poison and says he would never put it in his body. He credits genetics and healthy foods, vitamins and protein shakes. But mostly, it's the workout regimen that began at 9 and grew steadily, through his early stint as a track-and-field athlete, and blossomed through football.

He's currently the Argos' leading tackler with 60 this season, fourth-most in the CFL, despite sitting with an injury last week. However, he looks poised to reappear this week against his former team, the Calgary Stampeders.

McCune finishes his short, mid-week weight-training session at the campus gym alongside his Argos teammates, focused this particular day on the back, deltoids and triceps muscles that help him haul down running backs and toss aside linemen.

"I'm 34 now, and to play at a very high level, I have to be very strict with my workouts," McCune said after leaving the gym. "I pride myself on it."

Blue Bombers switch it up for rematch Eskimos
September 19, 2013 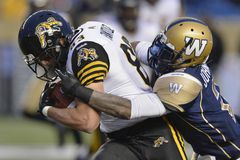 Durant sacked in closing seconds as Argos hang on to beat Roughriders
September 15, 2013 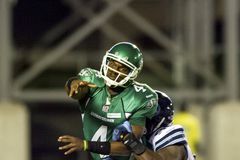 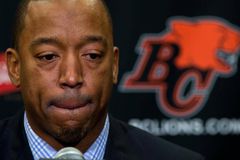 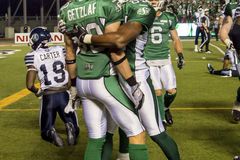 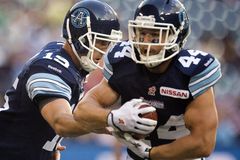 With Calvillo down, it’s quarterback by committee for Alouettes
September 17, 2013 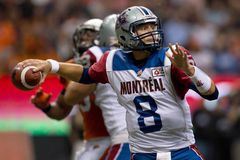 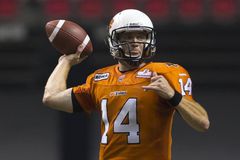 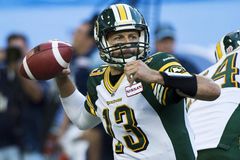