Rick Campbell and Chris Jones are together again.

Campbell and Jones were named finalists for the CFL's coach of the year award Thursday in voting by 65 members of the Football Reporters of Canada. Although they head up different teams — Campbell with the Ottawa Redblacks and Jones with the Edmonton Eskimos — the two worked together as assistants with the Calgary Stampeders in 2010.

"The thing I liked about Rick was he was so knowledgeable in all three areas and there was probably a good reason for that," Jones said during a conference call. "He grew up in a football household.

"If you've seen him operate this year, you take an expansion team and take them to where they are right now, it's a tribute to Rick."

Campbell, 44, led Ottawa (12-6) to a first-place finish in the East Division this season after winning just twice in its inaugural 2014 campaign. The Redblacks, led by CFL passing leader Henry Burris and a defence that had a league-high 62 sacks, will host the East final Nov. 22 for the first time since 1978.

But Campbell certainly saw plenty of winning football growing up.

His father, Hugh Campbell, won a Grey Cup as a receiver with the Saskatchewan Roughriders in 1966, then five more as Edmonton's head coach (1978-'82) before adding four additional titles as an executive with the franchise. The elder Campbell amassed a 70-21-5 regular-season record and 11-1 playoff mark as Eskimos coach, his lone CFL post-season loss coming to Montreal in the '77 Grey Cup.

Hugh Campbell, 74, was the CFL's coach of the year in '79 and inducted into the Canadian Football Hall of Fame in 2000.

"I actually haven't thought about it much," Rick Campbell said when asked about his legendary father. "I think there will be a day for bigger picture things and thinking about things like that.

"I'm proud of what he accomplished and what he's done in this league. Obviously he was very successful. We're just trying to be successful here in Ottawa."

Campbell said he learned a lot from Jones in 2010. That year, Campbell was an offensive assistant in Calgary while Jones served as the club's defensive co-ordinator.

"The thing I appreciated about Chris is he's always doing whatever it takes to win," Campbell said. "He keeps his eye on the prize and that's how I am too.

"I try to stay away from any of the extra-curricular drama and any of that stuff and just get the players ready to play."

Jones, 48, led the Eskimos to a 14-4 record — tied with Calgary for the best in the CFL — to finish atop the West Division after beating the Stampeders in two of three regular-season meetings. He was also nominated for the award last year, finishing as a finalist to Calgary's John Hufnagel.

Jones has compiled a 26-10 record with Edmonton and this year the club's defence allowed a league-low 341 points. But Jones shared the nomination with his coaches and players.

"I've got such a tremendous staff and it's the best locker-room I've ever been around in my time here in the CFL," he said. "It's an individual-type award but this is certainly a team award."

"There's a whole group of coaches here who spend a lot of time with the players getting them ready to play games and then our players who lay it on the line every week," he said. "And then there's (GM) Marcel (Desjardins) and our football operations staff.

"It really takes everybody to get it done."

This year's coach-of-the-year format is a change for the league. Traditionally three finalists were named and the winner was honoured well after the Grey Cup game.

Now the winner will be named along with the other award winners during Grey Cup week. The honour will be sponsored by AGF, a Canadian-based investment management firm.

"It gives us a greater platform and an opportunity to really amplify what we are doing," CFL commissioner Jeffrey Orridge said. 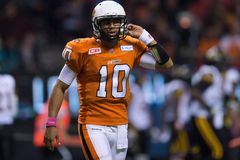 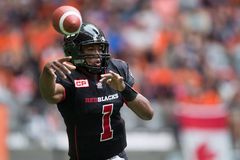 Argos must find a way to win at Tim Hortons Field to reach East final
November 9, 2015 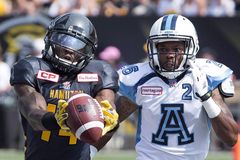