Zach Collaros was so dialed in during his first professional start that even his coach was a step behind.

With the calm demeanour of a seasoned veteran, the second-year quarterback threw three touchdown passes Tuesday as the Toronto Argonauts dismantled the B.C. Lions 38-12.

"I gave him a couple pointers throughout the game and he told me, 'Coach I'm way ahead of you,"' Argonauts head coach Scott Milanovich said with a chuckle. "That's just the way he was tonight."

Starting in place of the injured Ricky Ray, the 24-year-old University of Cincinnati product showed tremendous poise under pressure against the CFL's No. 1-ranked defence.

But despite his impressive debut, Collaros was quick to share the glory.

"I thought we played a great game. I thought in the second half, our offensive line really took their will away," Collaros said after finishing 21 of 25 for 253 yards. "Beating a great team like the B.C. Lions is awesome and hopefully we can build on this."

Collaros spread the ball to eight different receivers on the night, including end-zone strikes to Jason Barnes, Alexander Robinson and John Chiles. He also rushed eight times for 28 yards and gave the Lions defence fits with his ability to avoid the rush.

"The moment wasn't too big for him," Milanovich said.

Collaros wasn't the only player making his first start for the Argonauts. Rookie running back Curtis Steele, in the lineup for the injured Chad Kackert, rushed 12 times for 74 yards and two late TDs.

"Our mentality is we really don't worry about who's not in," Milanovich said. "We know we've got good enough players on this roster.

On the other side of the ball, the Argonauts bend-but-not break defence stymied the Lions and quarterback Travis Lulay, who were toothless in the red zone.

Lulay was 20-of-30 passing for 226 yards with an interception, running back Andrew Harris rushed 16 times for 107 yards and receiver Nick Moore caught six passes for 116 yards. Paul McCallum kicked four field goals to move into fourth all-time on the CFL scoring list.

The Lions mustered 378 yards of offence but couldn't punch the ball over the goal-line on a night that included four drives in the red zone.

"We were in it up to the fourth quarter but then we didn't take advantage of the opportunities that we had — just didn't make the plays," Lulay said. "They made the plays when it came to that critical point."

Toronto led 14-6 at halftime on two Collaros touchdown passes and never looked back on a rare Tuesday night game that concluded an awkward Week 5 on the CFL schedule.

After the Argonauts held the Lions to a field goal on their first possession after the break, Collaros threw his third TD, a 23-yard strike to Chiles, to make the score 21-6.

The Lions offence responded with a 10-play, 86-yard drive that was helped by a 40-yard pass completion from Lulay to Moore, but Toronto's defence again held firm and forced a 10-yard McCallum field goal that cut the lead to 21-12.

The Argonauts defence was anchored in the middle by defensive tackle Khalif Mitchell, who was traded by B.C. to Toronto in the off-season.

"When those special times came up we knew we had to step up and execute," Mitchell said. "Had to make sure that everyone on the field did their job."

A 24-yard-field goal from Noel Prefontaine stretched Toronto's edge to 24-12 before Shane Horton recovered a Harris fumble inside the Argonauts' 25-yard line with the Lions driving.

Lulay then fumbled deep in B.C. territory and Steele went up and over for his first CFL touchdown with 2:24 left to play. He added another TD run with under a minute to play from 11 yards out after the Lions failed to convert on a third down.

Toronto was without Ray and Kackert, who are both nursing knee injuries. The Argonauts have a bye next week and hope to have Ray back for their next game, a home date with the Montreal Alouettes on Aug. 8. Kackert, meanwhile, is expected to be out 4-6 weeks.

Trailing 3-0 late in the first quarter, Toronto linebacker Marcus Ball intercepted a Lulay pass to set up the Argonauts' first TD, a 22-yard pass from Collaros to Barnes that came just over two minutes into the second.

The Lions had a good looking drive going on their next possession but had to settle for a McCallum's second field goal of the night, a 17-yard effort.

The Argonauts got the ball to midfield on the ensuing kickoff after executing a sneaky reverse and Collaros capitalized again by engineering a scoring drive that culminated in one-yard touchdown pass to Robinson at 10:48 to take a 14-6 lead into halftime.

Notes: The Argonauts sit first in the East Division, while the Lions are third in the West. ... B.C. won the only other meeting of the two teams this season, 24-14 on July 4 in Vancouver. ... Collaros fumbled on his first possession to set up the Lions' opening field goal from McCallum. ... Robinson and Chiles also scored their first CFL touchdowns for Toronto. ... The Lions' next game is Monday at home against Winnipeg. ... Lions guard Kirby Fabien was carted off the field with a leg injury in the first quarter. ... Toronto's last victory over B.C. before Tuesday came July 23, 2010, a 24-20 victory at Rogers Centre. ... McCallum moved passed Troy Westwood on the CFL's all-time scoring list with his first of two field goals in the third quarter. ... Collaros is the first Argonauts quarterback to win his first CFL start since Marcus Brady, who lead Toronto to a 24-14 victory over Winnipeg on July 15, 2003.

Lions QB Lulay says he knows what Argos counterpart is going through
July 29, 2013 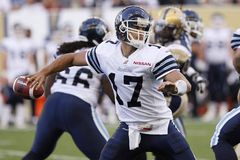 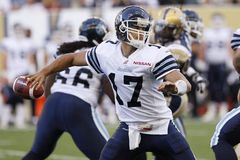 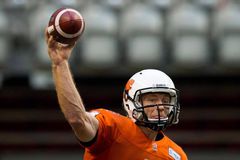 Argos win over Bombers may be costly as Ray knocked out with injury
July 19, 2013 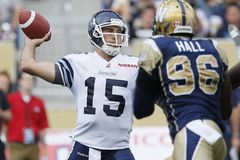 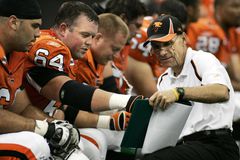 Roughriders only CFL team to remain unbeaten after 32-20 victory over Ticats
July 27, 2013 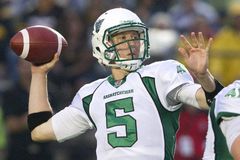 Collaros throws one touchdown, runs in another to lead Argos over Als
June 20, 2013 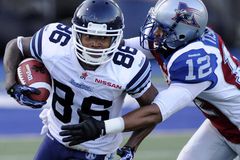 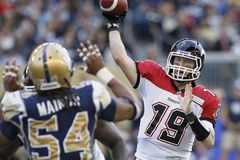 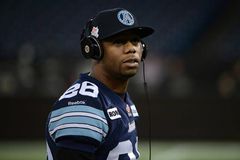