Drew Willy admits he doesn't know the ins and outs of the CFL game, but he stepped up in a big way when given opportunity Sunday.

The Saskatchewan Roughriders' rookie quarterback replaced an injured Darian Durant in the first quarter and put together a winning drive that ended with Sandro DeAngelis' last-play 40-yard field goal in a 25-24 victory over Winnipeg.

The opportunity came about after a questionable Blue Bombers' coaching call and a bad play.

Winnipeg had gone ahead 23-22 with less than three minutes to go after placekicker Justin Palardy connected on a 30-yard field goal, his fifth of the game.

But when the Bombers later got to Saskatchewan's 36-yard line, Winnipeg head coach Tim Burke made the call for Mike Renaud to punt the ball rather than have Palardy try a 43-yard field goal with the wind.

Instead of kicking the ball out of bounds and pinning the Riders deep in their own territory, Renaud's punt went into the end zone for a 56-yard single and 24-22 lead.

Saskatchewan then started at its own 35-yard line and Willy tossed a 10-yard pass to Kory Sheets, a 20-yard pass to Brooks Foster and ran 13 yards himself.

DeAngelis then booted his 40-yarder into the wind as time expired for his third field goal of the game to move the Riders' record to 5-5.

Willy said he was surprised the Bombers decided to punt rather than have Palardy go for the field goal.

"I'm kind of new to the CFL. I didn't exactly know what the right play was there, but I thought usually you kick it," the University of Buffalo product said.

"But they punted it and they were thinking they were probably going to stop us. To get a drive like that at the end was awfully fun to be a part of and a lot of guys did some great things out there."

Prior to the game, Willy was 15-of-18 passing for 154 yards in three appearances.

He finished Sunday's contest 17-of-23 for 188 yards with one interception and a 33-yard TD pass to running back Kory Sheets.

Durant said after the game he suffered a hip flexor and wasn't sure if he'd be ready to play in Montreal next Sunday.

DeAngelis was thankful he got the chance to boot the winning kick. He also connected from 34 and 23 yards and went wide on a 40-yard attempt into the wind for a single. Chris Milo added a punt single.

"I can understand what Tim Burke was thinking, '(The Riders) are going into a stiff breeze, let's give them a long field to work with,"' DeAngelis said.

"So I can understand the reasoning. At that point when they did do that, I knew, 'OK, I have a chance to win this game' because I had a feeling Drew was going to be able to drive the field."

The win comes on the heels on Saskatchewan's 52-0 thumping of the Bombers last week and dropped Winnipeg's record to 2-8 in front of a sold-out crowd of 30,077 that was boosted by extra seats at Canad Inns Stadium.

Burke, who replaced fired head coach Paul LaPolice on Aug. 25, said he'd take the call back if he could.

"In retrospect, I should have kicked the field goal," Burke said. "It was 42 yards with the wind, I should have just kicked it and I played it too conservative."

The team's former defensive co-ordinator said two things went through his mind at the time.

"I thought our defence was really playing well and I thought if we could pin them down inside the 10, it'd be virtually impossible for them to get it down the field," Burke said.

"Obviously, we didn't get the ball punted out of bounds so that killed us right off the bat."

Burke had confidence his defence could still nix a winning drive, but it gave up the long pass to Foster when a player he didn't name made a mistake.

Renaud was subdued after the game and pointed at himself for a bad punt.

"It's one of those grey areas where that comes into play and they opted to punt instead of kicking a field goal so it's on us. We didn't execute, I didn't execute," Renaud said.

"I know Justin wanted to maybe kick a field goal. Certainly he wanted the game in his hands but, again, it's on me, I didn't execute it. I was supposed to punt it deep, it didn't happen."

Demond Washington scored on an 82-yard punt return for Winnipeg late in the first quarter.

Sheets added a two-yard TD run to his 33-yard catch-and-run score, giving him one receiving and eight rushing TDs this season.

Winnipeg quarterback Joey Elliott made his fourth straight start for the Bombers and was 19-of-33 for 241 yards with no TDs and no interceptions.

Elliott said he thought Burke made the right call because the defence was playing well.

The Bombers led 10-3 after the first quarter, the most points they've scored in the opening quarter this season. They held on for a 14-13 lead at halftime, the first time they've been ahead at the break this season.

Notes: Along with Durant, Saskatchewan receivers Weston Dressler (possible concussion) and Scott McHenry (undisclosed) also didn't finish the game. ... The Bombers travel to Calgary (6-4) for a game on Friday. Banjo Bowl to provide Bombers a chance for redemption
May 8, 2018 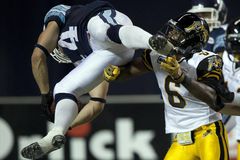 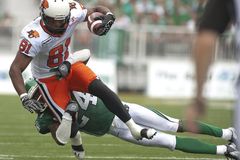