She's been described by some of her CFL co-workers as a Grey Cup rock star.

When it comes to Canada's biggest yearly football event, she is the overseer of details large and small. The job is sometimes glamorous, such as when she travels to world-class sporting events in search of ideas, welcomes players into the CFL awards gala or deals with the Prime Minister's office to secure his presence at the big game. Other times, the job is gritty, such as packing a U-Haul truck with everything from footballs to banners and computers, and then driving to Ottawa days before most staffers would arrive.

On the eve of the 105th rendition of Canada's favourite football game, Céline Séguin, 31 and Grey Cup director, is in charge of it all. She spent her year planning the CFL's championship event and the party-filled festival that surrounds it.

Since joining the CFL's Toronto office fresh out of university as an intern in 2009, Séguin has been immersed in the planning of several Grey Cups and quickly climbed the ranks from event co-ordinator to this position, which the CFL created last fall.

"I think Grey Cup 12 months a year, so it's funny when people ask me what I do in the off-season," Séguin said. "What's an off-season? We have the planning for at least two Grey Cups going on all times. As soon as this one in Ottawa is done, we continue on with the plans we have going for Edmonton in 2018. I've already done seven site-visits in Edmonton."

The league created the job to add cohesion between the planning of the Grey Cup by the CFL and the Grey Cup Festival by the local committee. There was a need for someone to oversee the dozens of different departments involved and bring a uniform look, feel and polish to it all.

"There was talk about going outside to hire for this position, but it quickly became obvious that she was a natural choice," said Curtis Emerson, director of events and production at the CFL.

"It's a huge job, having to oversee so many different groups and deal with team presidents and local organizing committees who have ideas about the way things have always been done or should be done. She offers fresh perspectives, and she's passionate. I tell her all the time, 'You're going to be the first female commissioner of the CFL'."

Séguin grew up in Elliot Lake, Ont., a town of some 10,000 people north of Lake Huron, between Sudbury and Sault Ste. Marie.

"People ask me if I grew up loving the CFL," Séguin said. "Well, not exactly; the only sporting events I ever went to as a kid were my brothers' baseball games or, if I was lucky, maybe a Sudbury Wolves game. But I still grew up loving sports."

She played high-school basketball and then went to Laurentian University to study sports administration before landing the internship with the CFL. She left from 2010-12 to work with the Hamilton Tiger-Cats and then in sports sponsorships for S&E Sponsorship Group before Emerson had the chance to hire her back to the CFL.

She's worked on every Grey Cup since.

The Grey Cup is far more than a football game on Sunday. It has a glossy halftime show. It is several days of big media events with the teams. There's an awards gala and the CFL commissioner's annual address to the media.

There's also, of course, lots of fans and countless parties and events. It's a yearly pilgrimage for thousands of Canadians, who arrive in their jerseys, cowboy hats, kilts or helmets made of watermelons. They play their drums and trade pins, and they journey from pub to pub.

And the people behind the Grey Cup are striving to reach new and younger fans.

Séguin looks objectively at every aspect and asks whether things are being done as efficiently and purposefully as possible and whether some are valuable traditions or just old habits. It's something she learned from a highly respected veteran of the industry whom the CFL has consulted at times, Frank Supovitz. He's had senior roles in events for both the NFL and NHL.

"If you struggle to find a reason why you're still doing a certain event or doing it a certain way, maybe it's time to change it," Séguin said. "You can't just apply a cookie-cutter approach to the Grey Cup – each one is different."

This Grey Cup game, slated for Ottawa's TD Place Stadium on Sunday evening, is a highlight in a year of big events in the capital city, celebrating the 150th anniversary of Confederation.

"Everyone wants to see this Grey Cup raise the bar, and Céline has to keep her eye on the entire thing – not just the football game, but the guest experience, the television experience, and the festival integration," said Patrick Roberge of PRP Productions, which produces the halftime show. "She's our leader. Her new position was a statement from the league saying the Grey Cup is our biggest event. It's what everyone works toward, and we need to give it the attention and support it requires. And it has paid off having her in this role."

Séguin is hardly the only woman working on Grey Cup; the core team working with her every day on includes several females. At a media event this week, Séguin was walking around the room co-ordinating with several key women, such as the CFL director of content, Kelly Shouldice, and the VP of marketing, Christina Litz – when a few media members took note.

"I heard a few people mention it this week, and one male reporter did mention it to me, 'Wow, there are a lot women working on Grey Cup'," Séguin recalled. "It's a great working environment, and I think women have every chance to advance at the CFL."

Séguin and Litz got full access to last February's Super Bowl in Houston, so they could research all aspects of the game and the fan festival. Séguin finds herself taking notes at every sporting event she watches or attends, from an MLS game on TV to a summer vacation at the 2016 Rio Olympics. She's part of a staff always on the lookout for something fresh to add to an event weaved into Canada's sporting culture.

"I've got this amazing group of colleagues that you've seen this week, they're running around and working so hard because they love the game as much as I do," said CFL commissioner Randy Ambrosie in his State of the League address. "They're energetic and vibrant and they love the game. It's so easy to go to work with people like that."

While Séguin used to be hands-on with many Grey Cup events, now she's the final set of eyes to come in and oversee them all. Ambrosie is the third commissioner with whom she's worked, and she's learned to adjust the commissioner's address to their individual speaking styles – Mark Cohon liked a microphone and tall stool, Jeffrey Orridge preferred a small lapel microphone, and she decided to install a sleek turfgrass floor at the last moment so he could walk across the stage while speaking without his shoes clicking too much.

Ambrosie approached her to ask if he could talk to the volunteers in Ottawa this week so he can thank them all in person. She'll work to make that happen, too.

Although she's 31, Séguin jokes that she's actually more like 25, because her birthday falls during Grey Cup week every year, so it takes a back seat to the full plate of last-minute logistics she's juggling. She spent her birthday Thursday night wearing a formal gown alongside many of her colleagues on the red carpet of the CFL awards night, directing players, coaches, owners and their families.

Her 32nd birthday will be in Edmonton and the planning for the 106th Grey Cup in the Alberta capital is well under way. Within six months, the site of the 2019 Grey Cup will be announced, and all of the hotels and key venues need to be locked in. Séguin says they're working to the point where three Grey Cups are being planned at once.

"We're noticing that more and more big events and conferences are coming to big Canadian cities and there's lots of competition for the best hotels, venues and conference centres, so we want to start booking our sites earlier," Séguin said. "We want to get ahead of that, so we get the best facilities, and we can deliver the best experiences." 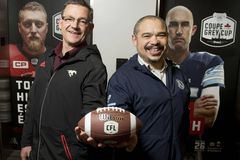 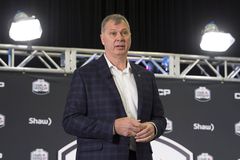 Opinion
Sport, the great unifier – except under Trump
November 24, 2017 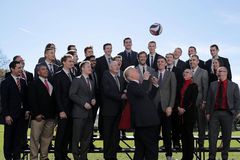