Calgary lost a prominent businessman while the Stampeders lost a former offensive lineman. But John Hufnagel lost a friend.

John Forzani, who spent six seasons with the CFL club and later built a chain of successful sporting goods stores, died Friday. He was 67.

The Stampeders confirmed Forzani's passing in a statement Friday morning. The Calgary native had been on life support in a California hospital after suffering a heart attack.

"John was a teammate, a friend, one of the funniest guys I ever knew," said Hufnagel, the Stampeders' head coach and general manager. "John was instrumental, along with Ted Hellard, Doug Mitchell and Bob Vickers, in my hiring in 2008, which I'm very appreciative of.

"Even though John is not with us, his legacy and his mark that he made in the sports world and in the business world in the community of Calgary will survive."

The Stampeders have become a model franchise under Hufnagel, finishing atop the West Division four times since his return. Calgary has reached the Grey Cup twice in that time, winning in '08.

Hufnagel has amassed a superb 87-36-1 record as Calgary's head coach heading into Saturday's home game against Winnipeg. The Stampeders have the CFL's best record this season at 14-2.

"He was pivotal in getting coach Hufnagel up here and for that reason alone, he's directly contributed to our success on the field," Stampeders running back Jon Cornish — the CFL's outstanding player last year — said of Forzani. "He's definitely a guy who took some of his football habit and kept on living with them throughout his life.

After attending Utah State, Forzani won a Grey Cup in 1971 in his first season with Calgary. He played alongside his brothers Tom and Joe.

"John's passion for community and football were singularly essential in the revival of the Stamps' important role in the community," Stampeders chairman Ken King said in a statement. "It is one, among many, of his great legacies. I will miss him dearly."

Commissioner Mark Cohon said the CFL family was saddened by the news of Forzani's passing.

"As a league, we are immensely proud to say he was one of ours," he said in a statement. "As individuals, we are so grateful to have known him. On the field, John was a Grey Cup champion. In business, he epitomized the entrepreneurial spirit. In the community, he supported causes he believed in. And as a member of our board of governors, and an owner of the Calgary Stampeders, he did much to move the CFL forward.

"Gregarious and outgoing, John was a joy to be around. He not only demonstrated to us all how to reach lofty goals; he showed us how to enjoy the journey as well. Our thoughts are with his family. Like all of his other friends across the country, we will miss him, and remember him."

After retiring from football, Forzani built his sporting goods business, which had over 500 outlets. That chain, FGL Sports, was sold to Canadian Tire in 2011.

Forzani also established Calgary's annual Mother's Day Run and Walk in 1977, a fundraising event which continues to this day. In 2000, the Forzani Foundation was established to assist charities including Canadian amateur athletics.

Forzani was also part of a local group that purchased the Stampeders in '05. The Calgary Flames became majority owners of the football franchise in '12 but Forzani retained a minority stake and was the team's co-chair in 2013.

Upon the arrival of the ownership group that included Forzani, the Stampeders went from a 4-14 team in 2004 to 11-7 the following season. The club has posted a winning record in nine of 10 seasons since.

"I called him uncle John," veteran Stampeders receiver Nik Lewis said. "He was part of the group that came in here and turned things around.

"Being here in '04 and seeing how bad we were as a team and the ownership group was always up in the air and you didn't know what was going on, to move into 2005 when Ted Hellard and John Forzani and the rest of the owners came in, you could just see the difference.

"There's not a lot of loyalty in professional football, but when you've got a guy like John, you really look at him and he's going to tell you what it is and how it is and you can respect it and you just love him for it."

"He was certainly instrumental in turning this football club around to the point you see how successful it is today," Norrie said. "He was a great contributor to the community of Calgary too with the Forzani foundation, a significant businessman behind the Forzani group. It's going to be a tough day for all of us.

"He was the funniest man I met in my life and he had time for everybody all the time. A very uplifting individual."

Forzani is survived by his wife Linda and grown children Mike and Jodi. Funeral arrangements were not immediately known. 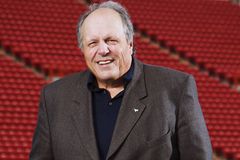 Where are they now: The first family of Stampeders’ football, the Forzani brothers
November 21, 2012 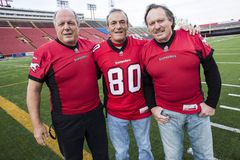