A first-half runaway almost turned into a second-half nightmare for quarterback Henry Burris and the Ottawa RedBlacks.

But Burris, 41, now officially the grand old man of the Canadian Football League, struck for an 18-yard touchdown pass to Ernest Jackson on the first drive of overtime, giving the RedBlacks, a third-year expansion team, their first Grey Cup with a 39-33 win over the heavily favoured Calgary Stampeders. Burris is the oldest player to start at quarterback in a Grey Cup game and he had a night for the ages, passing for more than 400 yards, the first player to pass for that much since Danny McManus did it in 1996 in a losing effort for the Edmonton Eskimos.

Read also: Everyone loves the CFL (except Toronto)

Burris and the RedBlacks had to sweat out Calgary's corresponding drive in overtime but quarterback Bo Levi Mitchell could not find a receiver in three tries and one of the greatest upsets in CFL history was in the books. It was also one of the most dramatic Grey Cups ever, as the Stamps fought their way back into contention in the second half.

The final minute of the fourth quarter saw Ottawa defensive back Abdul Kanneh make both the most egregious mistake of the night and one of the best plays of the game. First, he grabbed a towel in the belt of Calgary receiver Kamar Jorden that gave the Stampeders a first down and goal-to-go on the Ottawa eight-yard line. Then, after backup quarterback Andrew Buckley was sent in to try and run in his second touchdown of the game, Kanneh tripped him, forcing Calgary to settle for a 10-yard field goal with nine seconds to play that forced overtime and gave Ottawa another life.

After Burris opened the third quarter by directing another scoring drive that ended with a nine-yard touchdown pass to Brad Sinopoli, it looked like there was an easy path to one of the CFL's great upsets. But the Stampeders somehow collected themselves and it was the RedBlacks who started making mistakes that ate into their 27-7 lead.

The comeback started with a 32-yard Rene Paredes field goal. Then Calgary quarterback Bo Levi Mitchell, who had a horrendous first half, finally started hitting his receivers with Lemar Durant catching a 33-yard touchdown pass. The big mistake on that one was committed by Ottawa defensive back Antoine Pruneau. He somehow did not touch Durant after the latter fell after making the catch, allowing Durant to get up and run for the major. A video review let the touchdown stand.

Late in the third quarter, after a Calgary drive was helped along by a pass-interference penalty to Ottawa, Andrew Buckley replaced Mitchell with the ball at the Ottawa one-yard line. Buckley ran for the touchdown, becoming the first Canadian quarterback to score a touchdown in the Grey Cup since Russ Jackson did it for the Ottawa Rough Riders in 1968.

This tightened a lot of collars among Ottawa fans but Burris wasn't finished. Burris went back out for yet another scoring drive, ending it at 6:03 of the fourth quarter with a one-yard plunge for his second rushing touchdown. One oddity was that both converts were missed, on the Buckley and Burris majors, leaving the score 33-23 for Ottawa. RedBlacks defensive back Forrest Hightower gave his team some breathing room with his second interception of the game, stopping a Calgary drive with 3:21 left in the fourth quarter. But Mitchell and the Stampeders came back a minute later, working their way into Ottawa territory where DaVaris Daniels, on third-down and two yards, ran 19 yards for a touchdown with 1:38 left in the fourth quarter. The convert cut Ottawa's lead to 33-30, setting up Glenn Love's recovery of an on-side kick for Calgary that started the heart-stopping final 90 seconds of play.

The drama started during the pre-game warmup when Burris injured his left knee. "It was a fluid-on-the-knee issue," a RedBlacks spokesman told Gary Lawless of TSN. This set off a flurry of activity among the team's medical staff and Burris's status as the Ottawa starting quarterback was suddenly in doubt.

When the teams were introduced before the kickoff there was no sign on Burris. Backup Trevor Harris had his helmet on and took part in the coin-toss, won by the Stampeders, who elected to receive. However, during the coin-toss, Burris ran on to the field and began warming up.

RedBlacks general manager Marcel Desjardins told Lawless that Burris took "a myriad of treatments," and had his knee frozen. By the end of the first half, with Burris having the game of his life and the RedBlacks ahead 20-7, the only thing frozen was the Calgary game plan.

The team that finished the regular season 15-2-1, cruised into the Grey Cup by crushing the B.C. Lions, who had the second-best record and was ready to be anointed the greatest CFL team of all time came apart at the seams. Mistakes abounded, from Mitchell throwing interceptions to special-teams fumbles to bad penalties.

While Burris was picking apart the Stamps secondary with the help of receivers Greg Ellingson and Sinopoli, Mitchell looked nothing like the quarterback who was just elected the CFL's most-outstanding player in the regular season. Too many throws were off-target and Mitchell, who threw just eight interceptions all season, had two in the first half. Seldom has a CFL MOP looked so awful in the championship game.

Mitchell admitted in a TSN sideline interview that he did not play well in the first half. But he also said the receivers had to compete harder for "50-50 balls." The Calgary quarterback finished the first half Things were equally unhappy on the defensive side of the ball for the Stampeders. As they walked off the field at half-time, Calgary defensive coordinator DeVone Claybrooks and defensive end Charleston Hughes engaged in a spirited chat.

No doubt the subject was to do with getting pressure on Burris, who passed for 266 yards, completing 20 of 25 passes, one for a touchdown. He also scored one himself on a one-yard plunge. That one ended a crisp opening drive for Burris as he marched the RedBlacks 66 yards on 10 plays and eliminated any doubts about him and his knee.

Mitchell and the Stampeders answered that touchdown with an efficient drive of their own. He completed four consecutive passes, ending a 79-yard drive with a strike to running back Jerome Messam.

It looked like the Stampeders were in charge and all was right with the CFL universe. But Burris and the would not go quietly, driving for a 37-yard field goal by Ray Early and then hit Patrick Lavoie with a six-yard scoring pass at 6:46. Early added a 29-yard field goal and the RedBlacks had a stunning 20 points by halftime.

Long-time CFL fans were reminded of another big underdog, one of the RedBlacks' ancestors, the 1981 Ottawa Rough Riders. They finished the then 16-game regular season 5-11 and found themselves in the Grey Cup against the 14-1-1 Edmonton Eskimos.

By half-time, Ottawa had a 22-1 lead. But an inevitability quickly set in and the Eskimos ground out a 26-23 win.

However, Burris quickly went to work on any doubts when the third quarter started. He directed a 69-yard touchdown drive and ended it with a nine-yard pass to Sinopoli at 6:21 that gave Ottawa a 27-7 lead after the convert.

But things were far from settled in what turned out to be a far from your ordinary championship game. That touchdown shook the Stampeders from their torpor and with the RedBlacks now making most of the mistakes, the tension of the final 23 minutes and 39 seconds of the game began.

Why the CFL should just forget about trying to woo Toronto
November 25, 2016 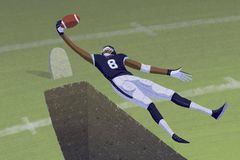 Henry Burris has faith in Ottawa RedBlacks’ second championship bid
November 25, 2016
Calgary Stampeders chase season for the ages with Sunday’s Grey Cup game
November 25, 2016
Follow David Shoalts on Twitter @dshoalts
Report an error Editorial code of conduct
Due to technical reasons, we have temporarily removed commenting from our articles. We hope to have this fixed soon. Thank you for your patience. If you are looking to give feedback on our new site, please send it along to feedback@globeandmail.com. If you want to write a letter to the editor, please forward to letters@globeandmail.com.
Comments