Atlantic Canada's long-held dream of wooing the CFL east of Montreal has been reignited after the league confirmed it's in talks with a "professional, enthusiastic and impressive" group of prospective owners rallying for a Halifax franchise.

But advocates and experts acknowledged Friday that sobering questions remain: Does the East Coast have the fan base to support a Canadian Football League franchise? Is the business community interested in sponsoring a team? And, perhaps most importantly, who will foot the bill for a new Halifax stadium?

"The CFL is going to want to see a stable ownership group with deep pockets, which appears to be the case," said Moshe Lander, a Concordia University professor who specializes in the economics of sports.

Stadiums hardly ever yield the economic benefits that are promised, Lander said, noting that it would need a minimum of 30,000 seats, but the "sweet spot" is closer to 40,000.

"You would ideally like to incorporate sponsorship," he said. "Sobeys would be an ideal anchor sponsor."

Halifax Mayor Mike Savage called a potential CFL team an "exciting opportunity," but said the municipality will not be leading the charge.

"A stadium is not a capital priority at this time," he said. "Any proposal would need to be private sector led and make economic sense for the municipality."

"The big issue really is the corporate support," he said. "This is the financial centre of Atlantic Canada and I think the CFL sees that if you want to have a franchise that is going to be successful there has to be deep financial roots and commercial support."

The league said in a statement there have been discussions with a group interested in securing a franchise for Halifax, but the talks are preliminary.

"These conversations are relatively new and a very thorough process of due diligence must be put in place and completed before we can fully assess the viability of the project," it said.

The CFL said it won't be conducting any interviews on a prospective team for Halifax until Grey Cup week and State of the League address. A league official said a timetable for potentially awarding a franchise has not yet been established.

Among members of the group is Bruce Bowser, president of AMJ Campbell Van Lines, who said in a statement they are "incredibly excited and bullish regarding the opportunity to bring this great sport and great league to the Atlantic region."

Former New Brunswick premier Frank McKenna, who has advocated bringing a team east in the past, said "there is reason to be optimistic" about the current bid.

The key, according to the deputy chairman of the TD Bank Group, is making the "very marginal" economics work.

"I'd say there are two or three secrets to success," he said. "You would need very strong community ownership. I'm thinking the models in Saskatchewan and Green Bay, for example."

"And you would need it to be more than just a football play," McKenna added. "It has to be real estate and retail and other things associated with it in order to increase the revenue from the property."

He pointed to the stadium at Lansdowne Park in Ottawa.

It's a model Savage called "attractive" after a 2014 tour of the facility, which includes the 24,000-seat TD Place Stadium.

The redesign of the park at the southern edge of the Glebe neighbourhood includes retail space, condominiums, and a children's play structure, which was considered critical to securing the Ottawa Redblacks franchise.

Lander said Halifax, with a major international airport, growing population, major universities and development, is a good location for a team. He said the CFL could use a team in the Atlantic region.

"It's odd to claim you're the Canadian Football League without having representation in Atlantic Canada," he said, adding that the league currently has an uneven number of teams.

"The CFL right now is nine teams and odd numbers for sports leagues is really weird," Lander said. "Sports leagues have this obsessive desire to turn things into conferences and divisions."

Derek Martin — president of Sports and Entertainment Atlantic, which is pitching a new FIFA-sanctioned professional soccer franchise for Halifax — called a prospective CFL team "positive" for the region but wondered whether there is a potential fan base.

"My concerns with the CFL is there isn't a history here in this market," he said. "There isn't a large number of youth that play football and have it ingrained in their DNA like in Saskatchewan. There is a lot of work that would have to go into developing the fan base so that consistently, game after game, you can get out 22 to 24,000 people into a stadium."

Martin added: "I do think it would be great if we could finally solve this large outdoor stadium riddle for Halifax."

Earlier this year, Halifax councillors unanimously signed off on a pop-up soccer stadium at a downtown municipal sports field.

Sports and Entertainment Atlantic pitched the temporary soccer facility in a bid to earn a team in the Canadian Premier League. The team's home field would be at the Wanderers Grounds, a four-hectare natural turf sports field on the Halifax Commons.

TSN reported Thursday the group pitching a CFL team made a presentation to the league's board of governors several weeks ago in Toronto. The report also identified Anthony LeBlanc, a former president and CEO of the NHL's Arizona Coyotes, as a partner in the group.

The CFL awarded a conditional franchise to Halifax in 1982 — it was named the Atlantic Schooners — but financing for a stadium never came about. The league played regular-season games in Moncton, N.B., in 2010, 2011 and '13. 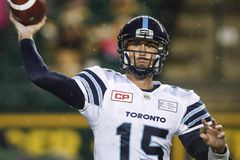 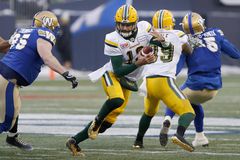 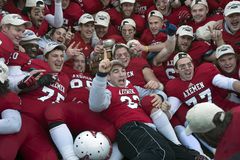