What had the makings of another championship blowout turned out to be a nail-biting thriller as the Calgary Stampeders hung on to defeat the Hamilton Tiger-Cats 20-16 to capture the 102nd Grey Cup title in Vancouver.

After building a comfortable lead through three quarters, the Stampeders defence bent but did not break as the Tiger-Cats mounted a spirited fourth quarter comeback. 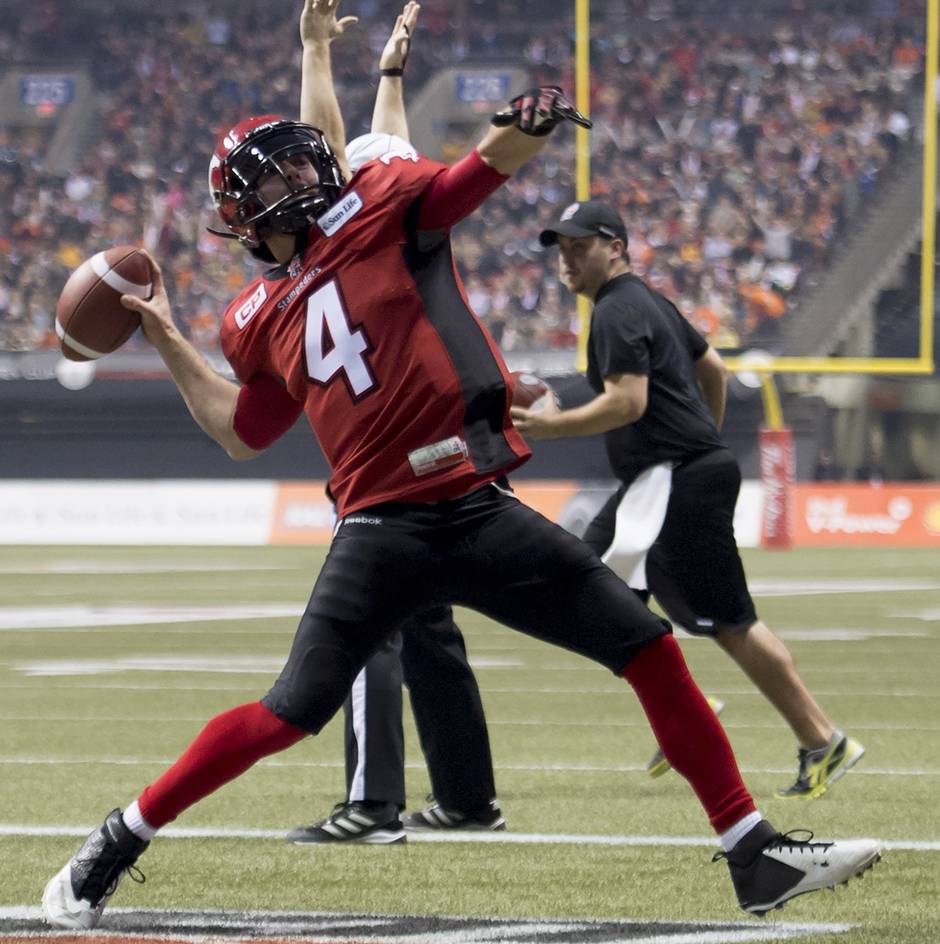 Backup quarterback Drew Tate scored on a one-yard touchdown run as the Calgary Stampeders grabbed a 7-0 lead over the Hamilton Tiger-Cats. Tate came in for the short yardage plunge over the goal-line with 9:48 gone in the opening quarter to cap a five-play, 55-yard drive that included a 28-yard pass from No. 1 pivot Bo Levi Mitchell to wide receiver Eric Rogers. Hamilton punted on its three drives and were lucky the deficit wasn’t any wider after running back Nic Grigsby’s fumble was recovered by Tiger-Cats offensive lineman Brian Simmons for a 29-yard loss. At least two Calgary players had their hands on the ball before Simmons fell on it. 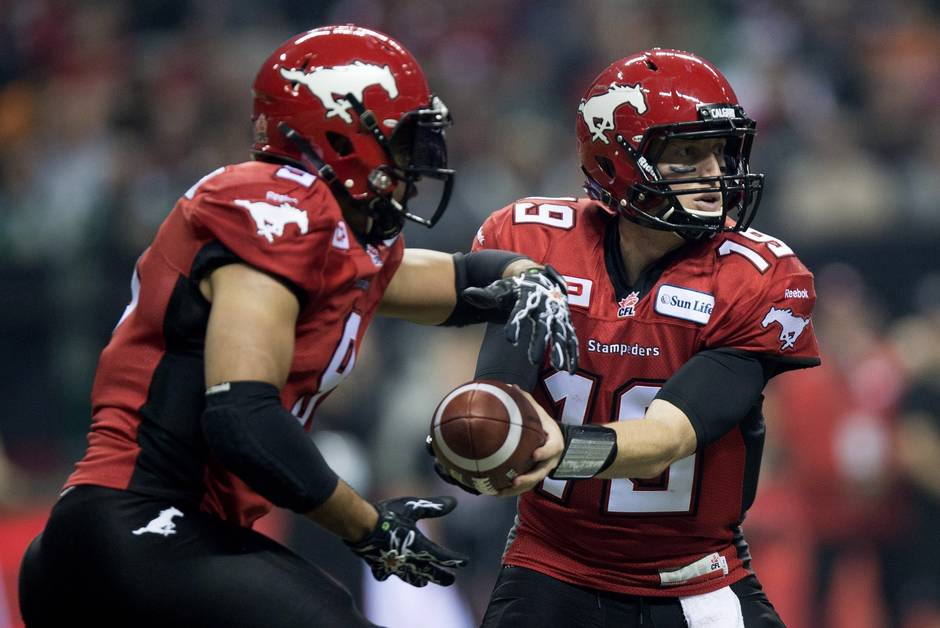 With the Stampeders up by a touchdown, Drew Tate doubled the lead with his second rushing touchdown of the game 48 seconds into the quarter to cap a 10-play, 66-yard drive led by No. 1 quarterback Bo Levi Mitchell. Hamilton had a chance to get on the board, but Justin Medlock’s 26-yard field goal was blocked by Calgary defensive lineman Demonte’ Bolden. Stampeders kicker Rene Parades then stretched the advantage to 17-0 with an 11-yard field goal at 12:43 after the ensuing Calgary drive of eight plays and 87 yards stalled deep in Hamilton territory. Stampeders did a good job containing Tiger-Cats returner Brandon Banks in the first half, but the speedster got behind the Calgary defence for a 45-yard touchdown on a pass from Zach Collaros that cut the deficit to 17-7 with 1:21 left in the half. 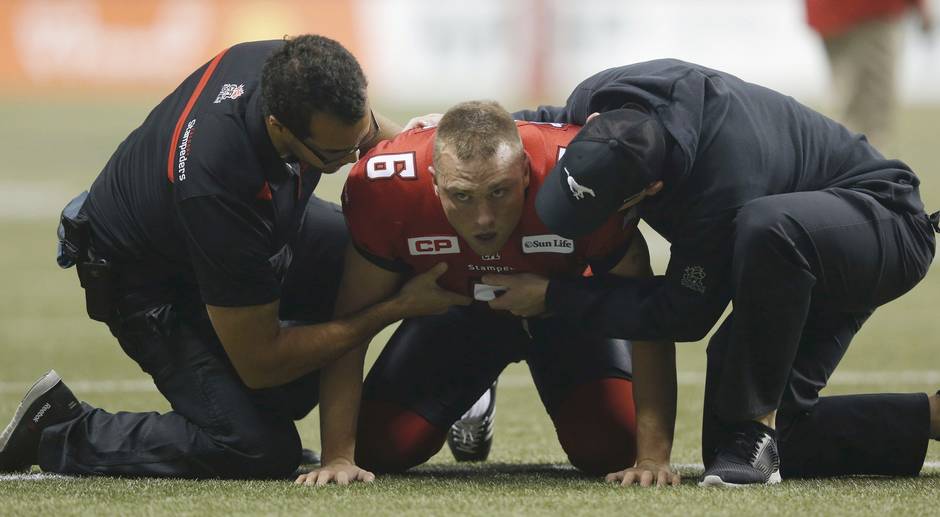 Calgary extended their lead to 13 points when Rene Parades kicked a 20-yard field goal with 4:20 left in the third quarter.Before that drive stalled, Stampeders No. 1 quarterback Bo Levi Mitchell completed 10 straight passes to tie for the third longest completion streak in Grey Cup history. The only other highlight of the quarter came when Hamilton defensive end Justin Hickman laid out Calgary punter Rob Maver with a massive hit on a return by Brandon Banks. Parades took over punting duties the rest of the way for Maver, who left with an injury to his abdomen. 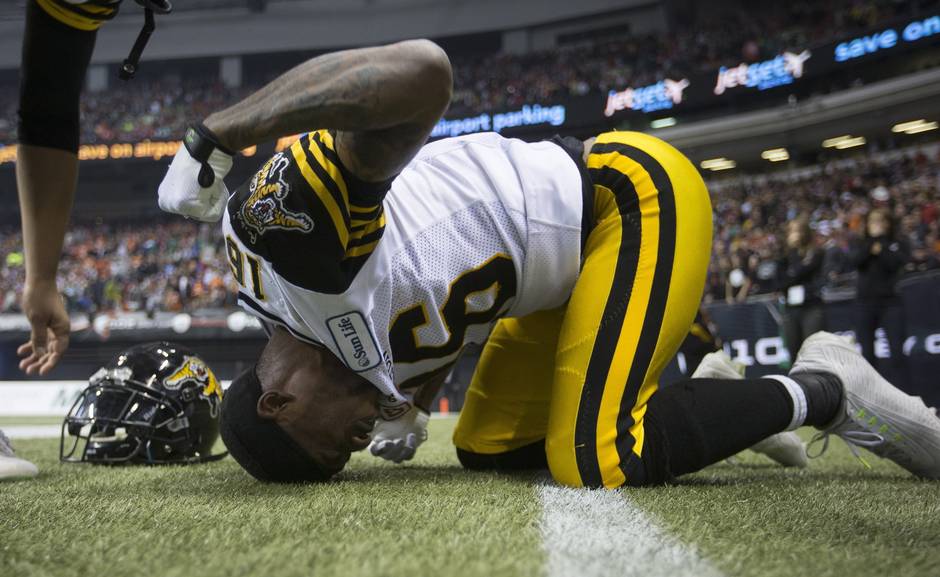 Delvin Breaux interception Bo Levi Mitchell for the only Stampeder turnover in the game to put Hamilton at the Calgary 50-yard line. Quarterback Zach Collaros marched the offence to the three-yard line before the Stampeders’ defence stiffened, resulting in Justin Medlock’s 17-yard field goal to pull to within 20-13. Hamilton regained possession at its 41-yard line with under four minutes remaining and marched to the Calgary 23. Cory Mace’s sack stalled the drive and set up Medlock’s 37-yard field goal to cut the lead to 20-16 with just over two minutes remaining. Brandon Banks brought Ticats supporters to their feet with 35 seconds left when he returned a Rene Paredes punt 90 yards for a TD, but it was nullified by an illegal block penalty. Instead of having the lead, Hamilton took over at its 12-yard line. Calgary hung on to earn its third straight win over Hamilton this season.