Blake Bortles put together one decent drive all day, doing as much with his legs as his arm, and the defensive-minded Jacksonville Jaguars eked out an ugly and sometimes unwatchable 10-3 victory against the Buffalo Bills in an AFC wild-card game Sunday.

In the post-season for the first time since January 2008, the third-seeded Jaguars (11-6) advanced to play at No. 2 seed Pittsburgh next week.

This was far from a passing clinic. It was more like a painful exercise in overcoming poor passing.

Bortles was off most of the day, misfiring short and long, but made up for it with 88 yards rushing. He scrambled for a long first down run after fumbling the ball late, prompting a Bills assistant to slam a clipboard and eliciting a huge grin from Bortles.

"We weren't sharp, we made some bad plays and did some stupid stuff, but we found a way to win and that's all that matters," Bortles said.

He completed 12 of 23 passes for 87 yards, with a touchdown. His TD pass to backup tight end Ben Koyack late in the third quarter was his best throw of the game. It also was a gutsy call on fourth-and-goal from the 1.

Bortles did the rest on the ground, scrambling for first downs and helping Jacksonville win its first playoff game at home since the 1997 season.

"You know, when we got beat last week at Tennessee, I didn't run at all, so I thought we got beat without kind of shooting all of our shots, so I said it made it difficult, so let's find some ways to move the ball and do some different stuff," Bortles said.

The Bills had plenty of chances down the stretch, but a huge penalty against Charles Clay and then a tackle that knocked quarterback Tyrod Taylor out of the game ended any threat of a comeback.

Taylor slammed his helmet hard against the ground after getting thrown down by Dante Fowler Jr. He had to be helped off the field and forced backup Nathan Peterman into the game with 1:27 remaining. All-Pro cornerback Jalen Ramsey tipped and then intercepted Peterman's third pass, and the Jaguars ran out the clock.

"We prepare hard and we study a lot of tape, we practice hard," Jaguars defensive lineman Calais Campbell said.

"We're battle-tested, so we know that if we just keep playing ball, good things will happen."

The Bills finished with 263 yards, with 119 of those coming from hobbled running back LeSean McCoy (ankle).

The Jags had a measly 230 yards. Leonard Fournette ran 21 times for 57 yards.

Bortles is the second starting quarterback in the past 25 seasons to win a playoff game with more rushing yards than passing yards (88 rushing, 87 passing). The other was Atlanta's Michael Vick in the 2004 divisional round against the Rams (119 rushing, 82 passing).

Trailing 10-3 with about six minutes to play, the Bills looked as if they picked up a first down on an 11-yard pass from Tyrod Taylor to Clay. Jacksonville players standing on the sideline pointed to Clay's feet, and coach Doug Marrone threw the challenge flag. Officials overturned the completion, saying Clay was out of bounds and setting up a third-and-10 play from the Jacksonville 48-yard line. Linebacker Myles Jack sacked Taylor on the next play, forcing a punt.

Bills: Safety Micah Hyde left the game in the third quarter and was being evaluated for a concussion. Cornerback Tre'Davious White went to the locker room in the fourth to be treated for cramps. Safety Colt Anderson injured his right shoulder in the fourth trying to make a diving interception. Guard Richie Incognito (shoulder) and Clay (hamstring) left briefly in the first half but returned.

Jaguars: Linebacker Paul Posluszny left the game with a hip injury, tried to return and then headed to the locker room for further evaluation. He was listed as questionable and returned to the sideline after halftime. Receiver/punt returner Jaydon Mickens left with a hamstring injury and did not return.

The Jaguars will play at second-seeded Pittsburgh next Sunday, a rematch from Week 5. Ben Roethlisberger threw five interceptions, and Jacksonville won 30-9. The Steelers have won 10 of 11 since, the lone loss coming against New England. 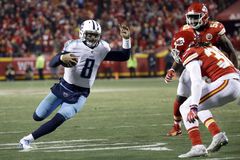 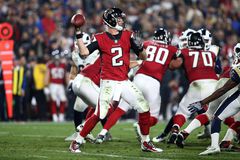 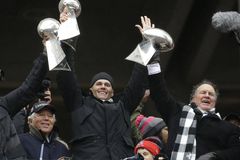