For the longest time, he considered himself forgotten. No one called or seemed to care that he had broken his neck trying to make a tackle for the Edmonton Eskimos. Most everything about him had faded into the past. James Bell? Did the name ring anything? To anyone?

But on Sunday, at Edmonton's Commonwealth Stadium, in a game between the Eskimos and Montreal Alouettes, Bell will walk onto the field and stand along the sidelines, a guest of the Eskimos alumni. The crowd will be told Bell's story; that on Sept. 19, 1986, he damaged his C4 and C5 vertebrae with his hit on B.C. Lions' receiver Jan Carinci. At that moment, Bell's football life was over. Doctors informed him he may never walk again, that he'd likely be paralyzed for life. And for the longest time that looked to be the case.

But this Sunday, after 29 years on the mend, Bell will get his chance to say thank you to those who helped him in the months after his injury. While some may have forgotten him, Bell has never forgotten them.

"My daughters Jody and Jamie are still there in Edmonton," Bell said before leaving Port Arthur, Tex., where he lives and works as a salesman for the Mid County Chrysler Dodge Jeep Ram dealership. "I'll get to see them and my three grandkids. I'm really grateful for all this."

The simple-looking play that ended Bell's career wasn't so simple. Carinci caught a pass in the middle of the field and was hit from behind just as Bell, a 205-pound defensive back, zeroed in for the hit. The force of Carinci and the Eskimo tackler behind him crushed Bell and left him motionless on the turf at B.C. Place. He was rushed to Vancouver's Shaughnessy Hospital with no feeling below his neck. There was so much spinal swelling that the doctors couldn't operate. Bell was transported to Edmonton and placed in the Aberhart Centre.

His time there was spent wisely. Being a professional athlete, he was all about discipline and pushing himself physically to get back on his feet. Six months after the hit, some feeling returned in Bell's feet. That led to him holding onto hand railings for support and taking his first steps. From there, he went from bedridden to wheelchair bound to walking with a cane.

Edmonton fans took Bell's injury to heart and donated money to cover the medical costs. The Eskimos even gave him a championship ring after they won the 1987 Grey Cup in B.C. Place. But as time went on, Bell drifted further into the background. He and his Edmonton girlfriend parted ways. Eventually, he had to leave the country to find work. He figured he could do well by going back to Albuquerque, N.M., where he had starred in high school and university football. He figured wrong.

Low on money with no help on the horizon, Bell did what he had to do – he sold the 1987 Grey Cup ring for $5,704. It was heartbreaking but necessary. He had no choice.

He ended up in Port Arthur because his new girlfriend was from there. He tried to find work yet again. Earlier this year, he interviewed for a sales position at the Mid County car dealership. Manager Rickey George talked to Bell and noticed his limp and that "he had some troubles shaking a hand, he couldn't quite turn his wrist to grab a hold. I assumed a stroke," George said by e-mail.

A quick Google search got the background story Bell never mentioned in his interview with George. After hiring him, George figured the best thing he could do for the hard-working Bell was to contact the Eskimos and say, "If you guys are willing to allow it, I will do whatever it takes to make [Bell's return to Edmonton] happen."

"When [George] told me, 'You are going back up there and going to a game,' I just sat there and went 'Huh?'" Bell recalled, "It was like, 'You gotta be kidding me.'"

There was no such kidding. Bell was scheduled to fly out of Houston on Saturday, do a stopover in Phoenix then arrive in Edmonton for the first time in a very long time. He will get to see his daughters and their family and he will watch the game with a familiar tingling running up and down his spine.

"Will those chills come from the cool weather?" he is asked.

No, he answered. They will come from being there, in Edmonton, standing up for all to see and remember, too.

James Bell to join Eskimos for a homecoming 29 years in the making
October 30, 2015 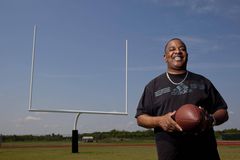 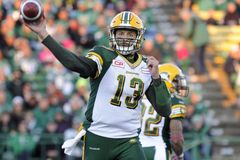 Reilly and Eskimos down Roughriders for seventh straight victory
October 25, 2015 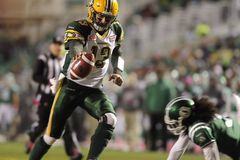