As they met at midfield for what was likely their last post-contest bro hug, it was Peyton Manning doing the talking.

Brady had already got it so wrong on Sunday in the AFC championship, one more time didn't really matter.

As was often the case when the two best pivots of all time met, it was not a very good game. It was a close game, ending 20-18 on a failed New England two-point conversion. Good and close – not the same thing.

Neither Brady nor Manning played well. That's also historically apt. The teams had a stretch of nearly three quarters in which neither could score a touchdown.

Brady spent most of the afternoon being peeled off the turf like gaffer tape. It's a poor and generally accepted rule that the best way to hem in the Patriots is to let them fill their boots with short, easy completions. Manning's Denver Broncos fought the New England offence – quite literally – for everything.

Brady carefully cultivates his reputation for gentility. Between appearances, he wore the expression of someone deeply affronted by his opponents' poor manners.

The stars of the afternoon were Denver's savage defence, and especially its rush ends, Von Miller and DeMarcus Ware. Men in orange came in waves on every single down. Brady was hit 20 times – the most of any quarterback in an NFL game this season. His first-half quarterback rating was 18.1. In real-life terms, that's like getting a crying emoji for your credit score.

Manning didn't perform much better, but had the luxury of taking fewer risks. As the game ground on, his passes became increasingly errant. You could see the vitality draining from him like a video-game avatar. But the opposing pass rush treated Denver more lightly, and so Manning gets to go to the Super Bowl for the fourth time in his career.

Once there, he'll face his through-a-funhouse-mirror flashback lookalike, Cam Newton, and the Carolina Panthers. The Panthers beat the Arizona Cardinals 49-15 in the NFC championship.

You're going to hear a lot in the next two weeks about the virtues and drawbacks of innocence and experience. What you should be thinking about is that Denver defence. If it can duplicate its performance against the Patriots, it is difficult to see the Broncos losing.

In historical terms, Brady vs. Manning XVII on Sunday proved nothing.

Unless he can win in Santa Clara, Calif., in two weeks' time against the NFC champions, Manning is still the postseason choker.

It no longer matters how many times he loses a big game, Brady is still the best there ever was. Or, at least, he is until someone comes to take the title. There are a few pretenders, but no current contenders.

Patriots head coach Bill Belichick is still evil (the closest he came to an emotion all afternoon was nearly toppling some poor guy with a boom mic as he made his way across the field after the game). Broncos head coach Gary Kubiak is still a great head of hair.

No reputations were made or broken. The only real loser on the afternoon was Microsoft. It has spent several hundred million dollars so that NFL announcers will mention at every possible (and impossible) moment that the electronics used by coaches as visual aids are Microsoft tablets.

When a bunch of them failed on the Patriots' sideline in the first quarter, prompting panic, CBS announcers didn't have the sense to stop saying "Microsoft Surface Pro Tablets" over and over again.

So the second and third winners on the afternoon? The NFL and Apple.

The league knew the NFC was not going to push forward a competitor that can be sold outside the United States. I imagine very few foreigners can find North Carolina or Arizona on a map. (I also imagine a great many Americans can't find them on a map).

When you are comparing the potential reach of Super Bowls, the overseas market is all that matters these days. America is saturated. These people are so sold on football, they'd watch the big game if it was chimps playing with bowling balls in a bog. Just put the right helmets on them.

Even Brady might have had trouble reaching the casual fan this time around. He's got four titles. He's coming off a win last year. There isn't a great deal of inherent drama in him adding to his stack.

But Manning? Manning is the perfect face to wrap a whiz-bang two-week marketing campaign around. His journey is easily sold in mytho-literary terms. He's the Lion in Winter. Britain (the next place commissioner Roger Goodell would love to put a franchise) will love it.

The question is whether Manning will embrace his role in the play. Will he spend two weeks pretending this is just one more step, or acknowledge that it's his last chance? I wouldn't dare guess.

Manning's playing for himself and his legacy, but he has been generous about it.

When he was demoted this season to de facto backup, he didn't chirp. While everyone (including this particular one) wrote him off against Brady, he endured. He's nowhere close to what he once was, but Manning may be just good enough – call it Trent Dilfer-level good – to win his second championship.

In so doing, he's given the league one last gift.

If you were going to watch the Super Bowl, it didn't really matter who was there.

But if you weren't and have any interest at all in football and/or history, you're probably reconsidering this morning. 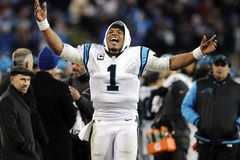