Over the course of his laurelled 21-year career, only one player challenged Peyton Manning for a starting job.

This was back in college. The guy was a big Texan named Branndon Stewart. By all accounts, Manning was a friendly, devious rival. In one instance, he locked Stewart out of a quarterbacks meeting, hoping to unsettle him.

Stewart eventually transferred to another school. He was soon out of football. He ended up opening a software business in Austin.

Manning ended up having one of the great careers in modern sports history, marked in its late stages by grim opportunism. He hadn't changed all that much. Manning wanted just one more chance to prove his was the guy who deserved the job.

In all likelihood, all that striving ended Sunday with a wild, sloppy Super Bowl win over the Carolina Panthers. Underdogs Denver took it 24-10.

At his best, Manning could completely control a contest. As an aching 39 years old, diminished by injury and struggling for form, he had nearly no impact on a game that may in time come to define what 'gutting it out' means at this level.

The Broncos summoned practically no offence over 57 minutes of football. Fortunately for them, neither could Cam Newton and the Carolina Panthers. For four hours, we watched the Denver defence get an arm around Panthers and put them ungently to sleep. This was as good as uni-dimensional football can be.

In the lead-up to the game, Manning was often close to a snotty mess. He was "near tears" at a Broncos meeting, according to teammates.

Speaking with CBS, Manning barely held on when asked what he hoped would be his legacy.

"That my teammates said I was a great teammate," Manning said, furiously clearing his throat in that way a man does just before he loses it. "And that coaches that I played with, and that I played against, would say that they respected me. That's, uh … [significant pause] … that would be important to me."

It's not just a good legacy. It's a good political platform.

Manning's lavish professional funeral at Super Bowl 50 was supposed to remind the NFL how far it had come from its scrappy beginnings. Tickets to that first championship extravaganza in 1967 could be had for 12 bucks. They still couldn't sell it out. The broadcasters didn't bother to record it for posterity. The contest was a scrappy mess and a blowout.

A half-century later, the stage had changed. The lead-in seemed to last most of a week. The pregame was so stuck for material, CBS resorted to a baffling five-minute mockumentary imagining how the league would have changed had the Buffalo Bills won the four titles they lost in the early 1990s. The sketch read like intentional-unintentional parody. The NFL can do many things. Postmodernism isn't one of them.

But once the contest finally started, we were reminded that while the delivery may now be slicker than any on the planet, the game isn't necessarily so. This was sloppy, nervous, error-ridden, but somehow still watchable football

Manning managed an impressive 64-yard drive to begin matters, and an early 3-0 lead. Then both he and any semblance of organization disappeared entirely.

Manning isn't just a fading presence any more. Seeking his 200th career win, he's just barely a professional player. His throws had no zip or intent. He looked as if he was trying to toss a cinder block into a well. His tightest spiral was an interception.

While Manning struggled to find whatever counts as the quarterback's Mendoza line, his defence began to assert itself.

Throughout the year, Carolina and Cam Newton bullied opponents. The Panthers don't bother with the death-by-a-thousand-cuts philosophy of rhythm football that's so popular right now. They take big bites until you bleed out.

Against Denver, a clearly nervous Newton could not settle. He is a big, fast man, but the Broncos defence is filled with multiple large humans who are nearly as fast and a great deal more vicious.

You can't say it out loud any more, but everyone knew the Broncos' only winning formula – hurt Cam Newton.

They pursued that tactic relentlessly, continuously courting penalties in their just-under-the-line headhunting.

At one point, Newton fumbled after a sack near his own goal line. During the resultant scramble that ended in a Denver touchdown, he 'accidentally' got kneed in the head. It wasn't an accident. It also wasn't a penalty.

While Newton was fleeing for his life, the rest of his team was pooching the opportunity to occupy the spotlight. The low moment of the half saw two Panthers brushing past Denver punt returner Jordan Norwood as he refused to call fair catch.

Given that, the eye-rolling banality of the halftime show seemed more jarring than usual, because it was insipid in a way that seemed planned. We'd all grown too used to watching things fall apart.

In the second half, more of the same. Denver managed to build a thin two-score lead, then turtled. Each possession went something like this – a pair of pointless runs up the middle and then give up. At one point, Denver missed 12 consecutive third-down conversions. Twelve! There's playing it safe, and then there's surrendering yourself to fate.

As much as any team in the history of the Super Bowl, Denver had ceded all authority to its defence. With four minutes left, the game's dominant player, Denver edge rusher Von Miller, proved the wisdom of that decision.

He stripped Newton of the ball. Denver recovered inside the Carolina five-yard line. A touchdown put it out of reach. The Broncos came very close to being the first team in league history to win a championship game without scoring an offensive TD.

It's an odd ending for Manning, but not entirely unfitting. He was the sort of guy who found a way, even if that meant getting out of everyone else's. 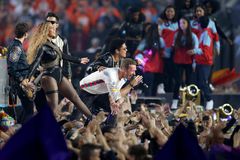 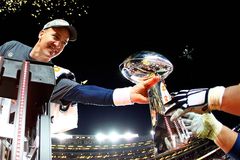 Kelly: The NFL recreates itself every day, and never looks back
February 5, 2016 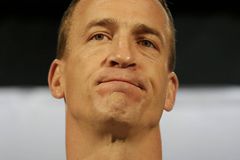 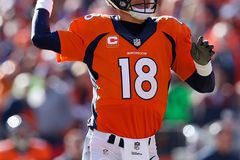 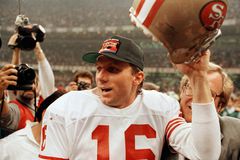 Super Bowl kickers ready for a shot at a trophy-winning field goal
February 5, 2016 Some of NFL’s biggest stars never played in a Super Bowl
February 4, 2016 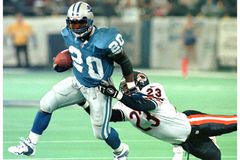 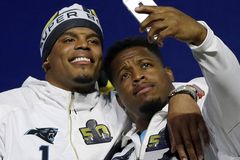