It has been an awful year for the Canadian Football League. The majority of teams put on, at best, a mediocre show this season. The stars didn't shine, including Canadians such as running backs Jon Cornish (Calgary) and Andrew Harris (B.C.), who were waylaid by injury. Montreal's record-breaking quarterback Anthony Calvillo retired – and a next-generation QB who'd shown potential, the Lions' Travis Lulay, now looks like he'll never again be the pivot he once was because of injuries. Attendance league-wide fell six per cent, and scoring declined by more than 10 per cent to a three-decade low.

And while it's lame to critique the quality of referees, the officiating this season has also been subpar.

All this has left the Grey Cup in Vancouver, 21/2 weeks before kickoff, with only about 47,000 of 53,000 seats sold. Organizers hope the start of the playoffs sparks renewed interest, because sales of the expensive tickets have been stalled for weeks.

In recent years, the big game hasn't been such a tough sell. In 2010, Edmonton sold out the Grey Cup in three days. B.C. sold out the 2011 Cup in Vancouver by July, even though the Lions were in the midst of a horrendous start (though they roared back that season and won a stirring home-town victory in front of 54,313 fans). Toronto sold out the Rogers Centre for the 100th Grey Cup by mid-summer; Regina did the same at Mosaic Stadium last year.

"I am confident we are going to sell out," said outgoing CFL commissioner Mark Cohon. "I'm confident there's going to be a great feeling in the building."

With Cohon on his way out, some titans of the Canadian game are suggesting the league needs change. Wally Buono, the Hall of Fame coach who is the B.C. Lion's vice-president of football operations, this month floated the idea of a single division, rather than the long-standing East Division-West Division split.

Buono pictures one nine-team league, with seven of the teams making the playoffs. The top team would earn a bye in the quarter-final round, with the other six teams squaring off ahead of semi-finals. Buono cited a standing inequity – this year's second-best team, the 12-6 Edmonton Eskimos, has to play a semi-final, whereas the top team in the East, the 9-9 Hamilton Tiger-Cats, get a bye.

"I say this very respectfully," Buono told a reporter earlier this month. "We need to do things different."

Buono's Lions, also 9-9, are the eighth team to "crossover" in the playoffs since the CFL instituted the idea in the 1990s. The Lions were fourth in the West, but qualified for the playoffs as the third team in the East, and will play Sunday on the road against Montreal.

"Our sense is this game will sell out," said Jamie Pitblado, general manager of the 102nd Grey Cup Festival. "There seems to be a lot of energy."

Pitblado is courting corporations to charitably purchase the remaining tickets and give away to kids from low-income families and members of the Canadian Armed Forces.

"The mood," said Pitblado, "is starting to build."

Quarterbacks the big story in these CFL playoffs
May 12, 2018 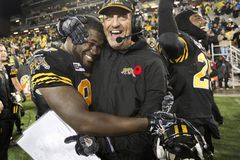 Marquay McDaniel named the CFL’s offensive player of the week
May 12, 2018 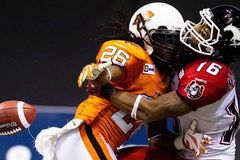 Milanovich expecting to remain with Argonauts
May 12, 2018 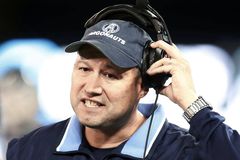 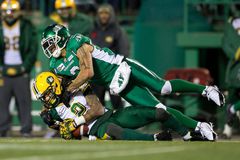 Stampeders carry momentum into playoffs with win over Lions
May 12, 2018 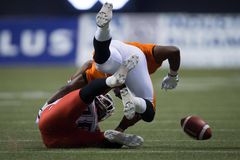 Argos keep playoff hopes alive with win over RedBlacks
May 12, 2018 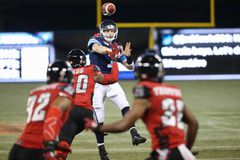