The B.C. Lions aren't going to get too wrapped up on how they won, only that they did.

Paul McCallum booted a 46-yard field goal with one minute remaining as the league-leading Lions won their third game in a row, getting past the Edmonton Eskimos 19-18 on Saturday.

Edmonton had taken an 18-16 lead with three minutes left when kicker Grant Shaw nailed a 40-yard field goal after a clutch 47-yard catch by Cary Koch.

But the Lions marched right back into the lead when McCallum was able to make up for a couple of earlier field goal misses in the second half and boot in the game-winning field goal to make it 19-18.

The Eskimos then turned over the ball on downs at their own 42, allowing the Lions to run out the clock.

"I wouldn't have had to make that last one if I had made the other two," said McCallum, who was four for six kicking three-pointers on the night. "I struggled a bit to find my rhythm. Maybe I was over-thinking things. I just need to go out there and kick the ball and not worry about it. I'm just glad my earlier misses didn't end up costing the team.

"We made it a bit harder on ourselves tonight, but this is a good character team and fortunately we came out with the win."

With the victory, the Lions padded their lead atop the CFL's West Division, sitting at 9-3.

Quarterback Travis Lulay said getting the victory was more important than how they did it.

"They are not all easy," he said. "We were playing on the road and they jumped on us early. Hats off to our guys for continuing to fight and finding a way to get better. Obviously offensively you want to turn some of those three-point scores into sevens, but win by one point or by 20, we are walking out of here with a win and we feel good about that."

The Eskimos meanwhile are in a complete tailspin, losing four in a row, including an embarrassing 51-8 defeat in Hamilton last week.

"When you lose another game by one point, it's extraordinarily frustrating," said Eskimos head coach Kavis Reed, whose team lost a pair of close games to Calgary on last-second field goal misses earlier in the month.

"There are no moral victories in football. All losses hurt the same."

Edmonton dropped to 5-7 and could fall into sole possession of last in the West with a Saskatchewan win over Calgary on Sunday.

Edmonton started the scoring on a punt single, the only point of the opening quarter.

The Eskimos went up 8-0 early in the second quarter as a 43-yard Joe Burnett punt return set up a long 27-yard touchdown pass that split the uprights from starting quarterback Steven Jyles to Koch.

The Lions responded with a 37-yard McCallum field goal.

After a successful challenge reversed a fumble call, the Eskimos took advantage midway through the second quarter as Hugh Charles swept four yards into the end zone to make it 15-3 for Edmonton.

B.C. countered with a pair of field goals to make it 15-9 at the half.

The Lions had a good start to the second half as Adam Bighill reeled in a tipped Jyles pass, giving them the ball on the Edmonton 50. However, the Esks came up with a strong stand on defence, and McCallum missed the 43-yard field-goal attempt.

B.C. wasted another good drive with four minutes remaining in the third quarter as the usually reliable McCallum missed a 27-yard attempt, settling for the single point.

Yet again the Lions missed out on an opportunity deep in Edmonton territory to start the fourth quarter when Kierrie Johnson was stripped of the ball by Weldon Brown at the Eskimos' 11 and returned 27 yards.

The Lions finally made good on one of their many second-half chances when a 49-yard run by Andrew Harris turned into a six-yard TD pass from Lulay to Geroy Simon, his first TD catch of the season. The two-point convert failed, leaving B.C. in front 16-15 with eight minutes to play to set up the back-and-forth finish.

Both teams are on the road next week. The Eskimos visit Calgary on Friday to play the Stampeders and the Lions are in Saskatchewan next Saturday.

Notes: It was the second game of the season between the two teams. Edmonton won the first match-up 27-14 in Week 4 in Vancouver. . . . Lions Khalif Mitchell and Eskimo Simeon Rottier played against each other for the first time since an arm-twisting incident in their last meeting. Rottier missed weeks of action with the injured arm, while Mitchell was suspended for two games for the infraction. . . . Last week's CFL offensive player of the week, Lulay has now completed TD passes in 23 consecutive games. . . . Simon's first TD of the season was the 100th of his career. . . . Edmonton linebacker J.C. Sherritt, who entered the game leading the CFL in tackles with 93, hurt his foot in the Hamilton loss last week and missed two days of practice but was ready for the game against the Lions. . . . The injury-riddled Eskimos had a couple of players back in the lineup as defensive lineman Marcus Howard and defensive back Weldon Brown returned. Fullback Darcy Brown also made his Eskimos debut.

Anderson under spotlight as Als face Argos with first place on the line
September 22, 2012 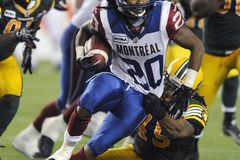 Pierce helps Bombers down Hamilton for third win of the season
September 21, 2012 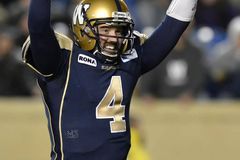 Eskimos co-ordinator Crandell has adviser breathing down his neck
September 21, 2012 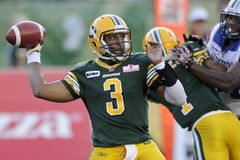 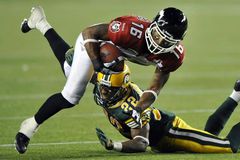 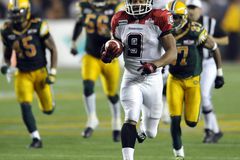