On Saturday night in Vancouver, hosting the hot Calgary Stampeders, the Lions yielded the first points of the game, a field goal, and it looked, briefly, like it was going to be yet another moribund first 15 minutes of the football game. The Lions, in their past three games, had tallied precisely one point in the three first quarters.

Down 3-0, less than three minutes in, Lions running back Andrew Harris opened the offensive push and pounded out two eight-yard gains. Quarterback Travis Lulay then took to the air and ended the nine-play, 80-yard drive with a eight-yard TD toss deep in the endzone to Shawn Gore. The pass marked Lulay's 25th consecutive game with a touchdown toss and gave the Lions a lead the defending Grey Cup champions would not relinquish all night.

The final was 27-22 and elevates the Lions to a Canadian Football League-best 10-4. The loss drops the Stampeders, who had won six of their last eight, to 8-6, second in the West Division, a position Calgary may possibly share come Monday when the Saskatchewan Roughriders (7-6) visit the Toronto Argonauts (7-6).

What is certain is the Lions will stand atop the CFL at the end of Thanksgiving. The Leos have a two-game gap over second in the West, with four games to go and a playoff bye week edging into clear sight. Also on Monday in the East, Montreal (8-5) hosts ailing Winnipeg (3-10) as the Alouettes look to hold, or extend, their one-game lead in the East.

The Lions-Stamps game - the marquee matchup in the CFL this weekend - had considerable electricity until early in the second quarter, when a series of penalties seemed to sap everything that had been percolating. The game settled down and the teams trudged along.

Early in the third, there was a brief spike of action on the second play of the half. Calgary's ferocious defensive end Charleston Hughes hammered his arm down on Andrew Harris's arm, and the football, in the B.C. backfield to force a fumble. The ball bouncing, it was fetched by defensive back Brandon Smith who scampered 48 yards for the defensive touchdown.

It was Hughes's fifth forced fumble of the year, tying him for the CFL lead. It was Harris's fourth fumble this year, which matched his four rushing touchdowns.

However, Harris - trying to help shoulder the offence with receivers Geroy Simon and Arland Bruce out with injury - booked another solid outing. Facing fellow Canadian Jon Cornish in the Calgary backfield, Harris outduelled his rival. Early in the fourth quarter, Harris strolled through a big hole opened by the Lions offensive line for a three-yard rushing touchdown, his fifth of the year. The score sparked some volume from the home crowd of 31,437.

Nick Moore, starting in the place of his injured slotback comrades, was the Lions leading receiver, with five catches for 83  yards, and a touchdown.

At the final gun, Harris had booked 125 yards from scrimmage,  73 on the ground and 52 through the air. Cornish had 93 yards, 61 rushing and 32 receiving. (For Cornish, it was, at least, a better showing than his worst game of the year, which came against the Lions in Calgary in late July, when Cornish managed 23 yards, 24 receiving, and minus-one rushing (on six carries).)

In other Saturday notes, the Lions conceded a sack in the fourth quarter, to Juwan Simpson, the first in four games against B.C. The Lions have now allowed 14 sacks this year, still by far the best in the CFL, with Montreal second at 20. 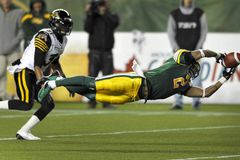 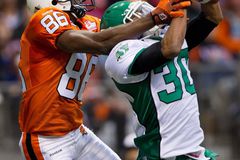 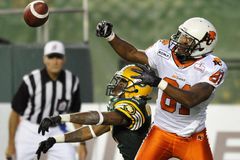 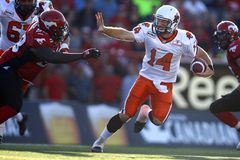 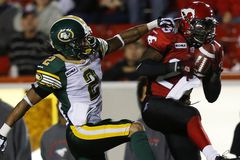