There is no arguing that Greg Marshall is one of the top Canadian university football coaches to patrol a sideline.

His career winning percentage of .751 as a head coach with the McMaster Marauders and the Western Mustangs rates him among the best.

His teams have captured eight Yates Cup titles in the 15 years he has coached in the gruelling Ontario University Athletics conference, considered Canada's toughest university football loop year in and year out.

Along the way, the 54-year-old Guelph, Ont., native has had the unique opportunity to be able to coach three of his sons at Western and has captured four national coach-of-the-year honours, including this season, with the undefeated (10-0) and No.1-ranked Mustangs.

But there is a blemish on that otherwise stunning résumé: His teams have never been able to claim the nation's biggest bauble, the Vanier Cup.

"The one thing that this game has taught me at the collegiate level is that the stars sometimes have to align properly for you to be able to win it all," Marshall emphasized this week, during an interview in his cluttered office on the Western University campus.

That is one detail Marshall hopes to rectify this season. On Saturday, at McMahon Stadium in Calgary, the Mustangs will play the Calgary Dinos in one of two national semi-final games.

It is an intriguing matchup as the Dinos, champions of the Canada West conference, also enter the game with an unblemished (10-0) record and are ranked No.3 in the country.

The other national semi-final will be played in Sackville, N.B., where the Mount Allison Mounties will attempt to be the giant slayer in their game against the Laval Rouge et Or, who are churning toward what would be an eighth Vanier Cup banner in only their 18th campaign.

While Marshall is loath to admit it, this Western team could be the best outfit he had commanded since he started his CIS head coaching reign with McMaster in 1997, rebuilding the program to national prominence with four consecutive Yates Cup titles between 2000 and 2003.

Western enters the game ranked first in the county in scoring with a gaudy average of 57.2 points a game and 422 passing yards, led by the strong arm of sophomore quarterback Will Finch.

"It is certainly as dominating a team that I've ever had, but I had some great teams at McMaster," said Marshall, whose Mustangs won by an average of 36.7 points this year.

When Western disposed of the Queen's Gaels 51-22 last Saturday to win the OUA crown, it was an astonishing 18th time Marshall has been a part of a Yates Cup-winning team.

He hoisted the trophy three times as a bruising fullback for the Mustangs, and won the Hec Crighton Trophy as the country's top player in 1980.

After a stint in the CFL that was cut short because of chronic knee problems, Marshall returned to Western as an assistant under Larry Haylor, and later became the offensive co-ordinator on a Mustangs team that counted another seven Yates Cup titles.

In 1997, it was on to McMaster University in Hamilton, where he won another four before he returned to Western in 2007, following a three-year coaching stint with the CFL's Hamilton Tiger-Cats. (In 2004, Marshall was selected as the CFL coach of the year.)

Marshall is highly regarded by his CIS coaching peers and that admiration extends to Stefan Ptaszek, who has succeeded Marshall as McMaster football coach.

Ptaszek was only a month or two into his first CIS head coaching position with the Marauders in 2006, when Marshall was fired by the Ticats four games into the CFL season.

Although it would have been a difficult spot for a rookie coach trying to find his way working in a very large shadow, Ptaszek did not hesitate to pick up the phone and offer Marshall a job on his coaching staff.

"He's been a wrecking ball wherever he's been."

Marshall turned Ptaszek down and accepting a job to return to Western as the offensive co-ordinator under Haylor. Marshall was made aware Haylor was winding down his tenure after 22 seasons and the job would be his the following year.

Marshall picked up right where he left off at McMaster, winning the Yates Cup in his first season at Western as head coach in 2007. But in what has become a distressing pattern, Western lost to Manitoba in the national semi-final.

Marshall's teams at Mac and Western are 1-6 in national semi-final games – the Mustangs' lone triumph in 2008, against Saint Mary's. Western would go on to face Laval in the Vanier Cup, and the Rouge er Or wound up earning a decisive 44-21 victory.

Marshall shrugs off his team's struggles at the national level, noting a missed field goal here and an avoided injury there is often the difference between success and failure at the university level.

So perhaps it is not surprising, when asked what his favourite coaching memory is, Marshall looks to last year, to a seemingly inconsequential 62-7 rout over the Toronto Varsity Blues early in the regular season.

All of Marshall's three sons scored a touchdown that game – Donnie, the quarterback, on an 18-yard run; Brian, a receiver, on a 25-yard reception; and Tom, who ran for a major from one-yard out.

"That was pretty special," Marshall said. 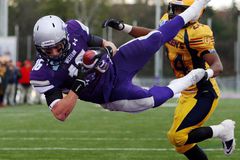 Western Mustangs on a roll, on and off the field
November 7, 2013 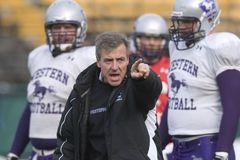 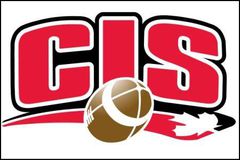