On Friday, the Hamilton Tiger-Cats introduced quarterback Zach Collaros, who signed Thursday, after being released by the Toronto Argonauts earlier in the week. And the first question put to Austin, the CFL club's head coach and general manager, was if Collaros was the Ticats starter.

"Listen, we signed Zach for a reason," he said. "We believe we have a proven player, a proven starter.

"The great thing about Zach is one of the first things he said to me on the phone a couple of days ago was, 'Coach, I don't expect to be given anything. I'll earn what I get,' and that's exactly the type of player we have.

"We don't distinguish a lot between starters and backups on this football team. Everybody we require we expect to play at a high level and Zach will have every opportunity to be our guy."

He also ran 59 times for 246 yards and scored five times.

Collaros was scheduled to become a free agent Feb. 15, and Toronto attempted to re-sign him. But with Collaros intent on testing the free-agent waters, the Argos released him early to allow him to gain clarity on his situation.

"I kind of lucked out coming to this league with such a great group around me and I was able to learn a lot of things from them that's translated to the field," Collaros said.

"I wouldn't have this opportunity right now if it wasn't for them."

Collaros joins a Hamilton team that reached the 2013 Grey Cup under veteran quarterback Henry Burris before losing 45-23 to the hometown Saskatchewan Roughriders.

Like Collaros, Burris is slated to become a free agent next month, but was released by the Ticats shortly after Collaros's signing.

"I know [Burris] is going to be successful wherever he lands"' Austin said. "He was an unbelievable person to coach, player to coach.

"I had a great discussion with him [last Thursday], and let him know no matter what he does, where he goes football, out of football, that he has an advocate in this organization and with me personally to help him in any way."

Burris, 38, is a two-time Grey Cup champion (1998, 2008), a Grey Cup most valuable player ('08) and, in 2010, was named the league's most outstanding player. With more than 50,000 career passing yards, the 14-year veteran – who is reportedly attracting interest from Winnipeg – is a sure-fire selection into the Canadian Football Hall of Fame after he retires.

But Collaros isn't worrying about following in Burris's footsteps.

"Definitely some expectations there," he said. "I think we all know Henry Burris is a Hall of Fame player in this league.

"I can't think about things like that. I had to fill in for Ricky Ray last year, and I didn't think about it. I just went about my work during the week and prepared and we were fortunate enough to win a lot of games and it got me this opportunity. If I think about that, it's going to hinder me."

Collaros wore No. 17 in Toronto but will don No. 4 with Hamilton.

"I'm the kind of guy who's going to pay the price during the week and in the off-season so that the results do come on the field," he said. "Do I want to be a starter? Do I think I can be a starter? Obviously. … That's just my personality. I'm just anxious to get to practice and really just to get up here and learn from the staff." 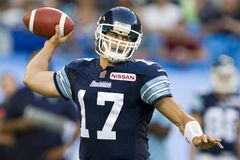 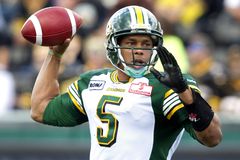 Anthony Calvillo announces his retirement after 20 CFL seasons
May 11, 2018 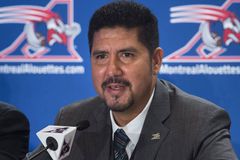 One year later much has changed for RedBlacks GM Desjardins
May 11, 2018 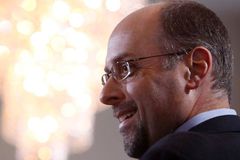