Goodell's extension through 2024 will allow him to help negotiate a new labour deal when the current collective bargaining agreement expires in 2021, and have a hand in talks over new broadcast contracts, spokesman Joe Lockhart said when announcing details of the deal signed last week.

"The commissioner I think has been clear that he views this as his last contract and will allow him to deal with some of the important issues that we know are on the horizon," Lockhart said at the luxury Dallas-area hotel where NFL meetings were held.

The extension has been a source of controversy because powerful Dallas Cowboys owner Jerry Jones objected to the process led by the six-owner compensation committee and chairman Arthur Blank of the Atlanta Falcons.

Lockhart said 90 per cent of the contract will be incentive based, which he said was an increase in nonguaranteed income over previous deals.

A person with knowledge of the agreement has told The Associated Press the five-year extension is worth almost $200-million with a base salary of $40-million. The person spoke on condition of anonymity because the figures are not made public.

Goodell made nearly $32-million in 2015, the last year public records of the NFL are available. League revenues have more than doubled to $14-million since Goodell replaced Paul Tagliabue in 2006.

Blank removed Jones as an ad-hoc member of the compensation committee after Jones threatened a lawsuit over the extension last month. Jones accused the committee of withholding details of negotiations from other owners and demanded the deal be presented to all owners even though they had voted unanimously in May to let the committee complete the contract.

Blank said Jones didn't have a role in an increase in the part of Goodell's contract that isn't guaranteed, but that Jones did have input on possible changes to how the compensation committee is put together.

When the Cowboys and Falcons played last month in Atlanta, the respective owners skipped their customary pre-game talk on the field.

"I've got a great respect for Jerry," Blank said. "I spoke to him ... on the phone about a week and a half ago. It was a very good conversation. I thanked him, which I didn't get a chance to do, or chose not to do really, the time we played because I didn't think it was the right setting."

Blank said the committee's handling of Goodell's extension was the most transparent he has seen in 35 years, going back to the tenures of Tagliabue and Pete Rozelle. Blank said owners were updated in general meetings and with multiple phone calls.

"We were not necessarily connected totally on how this process should have been handled," Blank said of his relationship with Jones. "We went to great lengths to make sure we were completely transparent."

Jones' dispute with Goodell surfaced in reports after the commissioner suspended star Dallas running back Ezekiel Elliott for six games over alleged domestic violence in a case prosecutors in Ohio didn't pursue. Jones has denied the suspension was the impetus for his objections over the contract.

"I don't know that there's a rift going forward," Blank said. "I think that Jerry, he loves the league, he loves the Cowboys, he's very passionate about issues that he cares deeply about, which is great. I think it's important to have difference voices in the room." 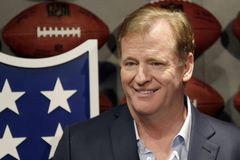 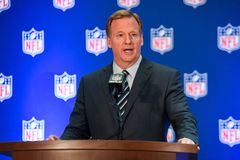