The NFL's all-injury team may be better than the All-Pro team this season.

The defence isn't too shabby, either: Start with J.J. Watt rushing the passer. Eric Berry captains the secondary along with Richard Sherman. Dont'a Hightower, Whitney Mercilus and Jordan Hicks chase down all the ball carriers.

And, the season is only half over.

It's scary to think who will join these star players on the sideline in the second half. Already, Sherman's ruptured Achilles tendon from Thursday night has continued the injury trend.

Everyone is wondering why there have been so many injuries in 2017. Could shorter off-season workout programs and decreased hitting in training camp be a factor? Are these just fluke injuries that could happen to anyone at any time and it's a coincidence so many big-name players have gone down?

"It's football man, it's tough," said Bills safety Micah Hyde, who has missed only one game in his career over four seasons with Green Bay and a half-season in Buffalo. "People like to think that it's the off-season workout and whether it's the training camp schedule. But being there and being here, it's similar schedules. It's similar practice times. It's similar everything."

"Training methods in the NFL are designed to lower and prevent injuries, including ACL tear prevention," Tehrany said. "Lack of contact in practices should lower the number of injuries during practice and potentially the number during games, as long as the players maintain their fitness."

Could cleats be causing problems?

"Multiple studies have shown that the number, size and design of cleats play a role in both ankle and knee injuries," Tehrany said. "The less aggressive the cleats, the better."

Perhaps players now are too fast, too strong and therefore more vulnerable and susceptible to injuries.

"I believe that we are looking at a new norm where we need to expect to see and treat more injuries because of the ever-growing strength and speed of the players," Tehrany said. "Unfortunately, we are seeing this in children as well."

The NFL's chief medical officer, Dr. Allen Sills, said the league monitors injury data throughout the season and there hasn't been a "huge spike" in overall numbers.

"From a scientific standpoint, we have to look at the overall numbers, look at a broad cross-section of the games and not small time points," Sills said. "Of course, every injury and every injured player is significant to us, and we are constantly looking to see if there are trends that need to inform us. We take our injuries surveillance very seriously and that's a major effort that continues throughout the season."

But people are paying more attention to injuries this season because it seems every week another superstar suffers a serious injury that ends his season.

Watt, a three-time NFL Defensive Player of the Year, broke his left leg on Oct. 8. In the same game, the Texans lost Mercilus (torn pectoral muscle). On the same day, Beckham and Marshall injured ankles and left the New York Giants without their starting receivers.

Thomas had never missed a snap in his career, going 10,363 consecutive plays, before he got hurt.

Losing key players can destroy a team's playoff chances. The Packers are 0-3 with Brett Hundley, including the loss to Minnesota in which Rodgers got hurt midway through the first quarter. The Texans with Tom Savage couldn't even beat the Colts. But the Eagles (8-1) have kept rolling despite injuries to Sproles, Maragos, Peters, Hicks and Ronald Darby. 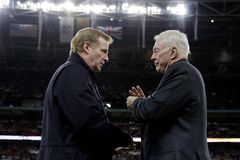 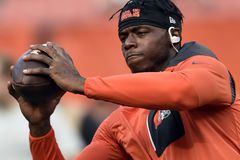