At age 34 and after more than a decade in pro football, Kevin Glenn is finally a first-round draft pick.

The Ottawa Redblacks took the veteran quarterback in the first round of the CFL expansion draft Monday. It came more than 13 years after Glenn was bypassed in the NFL draft, a move that allowed the former Illinois State star to begin his pro career with the Saskatchewan Roughriders.

"Someone texted me that I was actually the oldest first-round draft pick," Glenn said with a chuckle during a conference call. "This was the first time I was actually part of the whole draft experience.

"I enjoyed it, it was pretty cool and really exciting."

And Glenn will forever have a memento of Monday's draft. His family followed the proceedings online and taped Ottawa's official announcement of his selection.

The five-foot-11, 205-pound Glenn spent the last two seasons with Calgary, compiling a 20-8 record as a starter. He guided the Stampeders to a Grey Cup berth in 2012 and top spot in the West Division this past season with a league-best 14-4 record.

Glenn will also open the 2014 season 10th on the CFL's all-time passing list with over 39,000 career yards. And in Ottawa he'll be reunited with Redblacks head coach Rick Campbell, who served as Calgary's defensive co-ordinator last season.

"He's the consummate pro, he's a team guy," Campbell said. "I've always had a good relationship with Kevin . . . just because I was on the defensive side of the ball doesn't mean we didn't talk a lot.

"In fact, we would have good conversations about what he thought of what we were doing in practice and vice versa and I think we're fortunate to have him here."

Ottawa selected 24 players in the three-round draft. Glenn was among the eight imports picked in the first round before the Redblacks took 16 Canadians — or non-imports — over the final two.

Ottawa is scheduled to begin play next season.

B.C. Lions sophomore Thomas DeMarco was the other quarterback taken by Ottawa, which concentrated heavily on linemen in the draft. The Redblacks selected six offensive linemen — including starting guard Joe Eppele (Toronto) and veteran centre Marwan Hage (Hamilton) — and another six on the defensive side, including tackle Keith Shologan of the Grey Cup-champion Saskatchewan Roughriders.

There are questions surrounding both Eppele and Hage. The six-foot-eight, 301-pound Eppele, a B.C. native, will have off-season shoulder surgery while it's unclear if the 32-year-old Hage, a 10-year CFL veteran, will retire rather than uproot his family.

"We think we have the foundation for what we think is going to be a competitive team," Ottawa general manager Marcel Desjardins said. "In terms of wins, again, that's all to be determined . . . but this is a solid foundation because it is the guys who have the experience in this league."

Toronto GM Jim Barker praised the Redblacks for their draft.

"They took a lot of Canadian O-linemen, which is what you want to do," he said. "You want to try to build your Canadian talent base and I thought they did a good job with that.

"They've got a great balance of young guys and older guys."

"I thought they did an excellent job in their selections," he said. "They do have a good nucleus to start and they'll continue to do the due diligence needed to field a respectable football team."

Desjardins said selecting players like Shologan, Eppele and Pottinger was a no-brainer.

"Keith is a guy anybody in this league, he's an impact player at a position you don't find a lot of non-imports at," Desjardins said. "Joe Eppele is a player who has started a lot of games for Toronto and they've been able to win with him and we feel he's only going to get better.

"Jason Pottinger is a veteran in the league. He's been in a couple of cities (B.C. and Toronto), he's won, he's a significant player as it relates to his ability on special teams and you really don't miss out if he's starting for you at middle linebacker either."

CFL teams protected one quarterback and 10 non-imports for the opening round. Ottawa was then allowed to select among those left unprotected as well as pending free agents.

In the second round, CFL teams protected six non-import players, then were allowed to protect an additional six for the third.

"It's a fresh start in the nation's capital and it should be an exciting time for everybody," DeMarco said. "I met Kevin in Calgary and know he's a stand-up guy and I'm excited to work with him.

"I'm still young in my career and I'm looking for someone to show me how it's done and lead by example and hopefully I can bring my own attitude with it. You don't necessarily have to have a history of Grey Cups or national championships in order to make your own run at it."

Although he now has Glenn and DeMarco in tow, Desjardins said he'll be active in free agency to land other quarterbacks. Toronto's Zach Collaros, Saskatchewan's Drew Willy, Hamilton's Henry Burris and Edmonton's Matt Nichols are all slated to become free agents in February.

"There's a couple of good options out there and we're certainly going to pursue those," he said. "There's no reason why we can't be aggressive in that area.

This will mark Ottawa's third stint in the CFL. The former Rough Riders operated from 1876 until folding after the '96 campaign. The Renegades were born in 2002 but operated just four seasons before being suspended by the league due to financial instability.

Traditional thinking regarding expansion franchises is they usually require a few years to become competitive. But Glenn has very high expectations for the Redblacks and plans to be a vocal leader with the first-year squad.

"Anything is possible and that's one thing all the players that sign with the Redblacks should remember," he said. "If you go out and be competitive and you play good football at the end of the season, anything can happen once you get into the playoffs.

"As an experienced, veteran guy the one thing I want to do is bring that winning atmosphere, that winning attitude. A lot of times when you have guys around you who've won and had a lot of success, it starts to feed off to the different players in the locker-room."

Glenn has no bitterness towards Calgary for leaving him unprotected, saying he's indebted to the Stampeders for acquiring him from Hamilton after the 2011 season.

"I never let it get personal with me," Glenn said. "I was just grateful Calgary traded for me when they did and I was able to go out and still put on uniform and play for a good franchise, good coaches and good teammates." 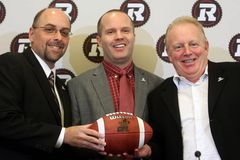 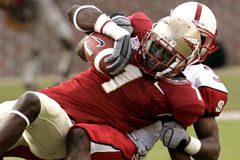 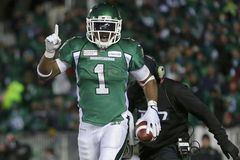