Rodgers threw a 61-yard touchdown pass to Richard Rodgers with no time left to give the Green Bay Packers a 27-23 victory over the Detroit Lions on Thursday night.

The Packers got the untimed down after Detroit defensive end Devin Taylor was called for grabbing Aaron Rodgers' facemask on a tackle on what would've been the last play.

The Packers (8-4) had lost four of five. The Lions (4-8) had won three straight and blew a chance to sweep the season series for the first time since 1991.

Matthew Stafford connected with Calvin Johnson on his second touchdown pass of the first quarter to help Detroit build a 20-point lead that it couldn't keep.

Aaron Rodgers scored on a 17-yard run with 3:04 left, pulling the Packers within two points.

Stafford connected with TJ Jones to convert a third-and-12 from the Detroit 18 after Green Bay called its final timeout with 2:54 to go. The Lions needed one more first down to seal the victory, but Green Bay forced them to punt and got the ball back on the 21 with 23 seconds left.

Following two incompletions, including one in which Detroit appeared to get away with pass interference, Aaron Rodgers threw a pass to James Jones and the ball was lateraled twice, leaving the quarterback with the ball and no one behind him to pitch to keep the play alive.

Aaron Rodgers scrambled long enough to give his receivers time to sprint to the end zone and got to the outside. The quarterback threw the ball, perhaps as high and far as he could, and his tight end found a way to get to it in front of a slew of players from both teams and leaped for the catch.

Aaron Rodgers finished 24 of 36 for 289 yards with two touchdowns.

Detroit went ahead 17-0 after its first three drives and capped the opening possession of the third quarter with a field goal to go ahead 20-0.

It wasn't a big enough cushion.

The Packers scored their first points with 5:44 left in the third when James Starks fumbled and Randall Cobb recovered it in the end zone.

On the next snap, Julius Peppers stripped the ball from Stafford and Jake Ryan recovered it for Green Bay at the Lions 12. On the ensuing third down, Aaron Rodgers perfectly lofted a 17-yard pass over linebacker Josh Bynes to Davante Adams for his first touchdown reception this season to pull the Packers within six points.

The Packers forced Detroit to punt on the next possession, but had to punt it back after Ezekiel Ansah had a sack on third down.

Stafford's 4-yard pass to Golden Tate converted a fourth-and-2 and escaped a rush to run for a first down on a third-and-9 in Green Bay territory on the ensuing drive, setting up Matt Prater's 42-yard field goal to give Detroit a 23-14 lead with 7:06 left.

The Packers kept their comeback hopes alive when Aaron Rodgers converted a fourth-and-1 from their 25 on a 15-yard pass to Cobb. The QB capped the 84-yard drive by running for a TD, pulling Green Bay within two.

On Stafford's two TD passes in the first quarter, he took advantage of Green Bay's disorganized defence and of having the 6-foot-5 Johnson as a teammate.

Stafford threw a 3-yard pass to Eric Ebron, who was uncovered, after the Packers scrambled around to get lined up and were left two defenders trying to cover three Lions.

One snap after Aaron Rodgers overthrew James Jones and Glover Quin intercepted the pass, Johnson added to his highlights. While cloaked by cornerback Sam Shields, he leaped to catch Stafford's 17-yard pass with two hands and squeezed the ball with only his right hand as he planted his right foot and dragged his left on the side of the end zone. 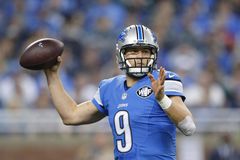 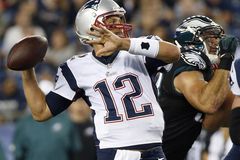