Darian Durant's move from Saskatchewan to Montreal may have solved the Alouettes' quarterback worries, while the Roughriders' uncertainty under centre is just getting started.

Durant, who played 11 seasons in Regina and helped the Roughriders to two Grey Cups, was dealt to Montreal on Friday for a fourth round draft pick in 2017 and a conditional pick in 2018.

The catch is that Montreal still needs to sign the 34-year-old, who can become a free agent on Feb. 14.

If he doesn't, the first major move by new general manager Kavis Reed could end in disaster.

"For the sake of this franchise, we did our due diligence," said Reed. "We analysed all the risks of doing this and we feel we put ourselves in a better position to have his rights now and not to have someone else introduced into the fray. We have a month to negotiate and we are very optimistic that we can get something done."

It was expected that the Alouettes would go into the season with Vernon Adams, a rookie who started and won the final three games of an otherwise wasted 7-11 campaign in 2016. While Adams showed promise, inking Durant could go a long way to making Montreal a contender in the CFL Eastern Conference if he stays healthy.

"Priority number one was to address the quarterback situation and to give ourselves a bona fide starter," said Reed. "Darian is a proven leader and a winner.

"We are in a position where we want to win right away and having someone of his calibre gives us three things: a quarterback that can help us win, a leader on the field and in the locker-room, and an example for the next guy that we're hoping to develop."

It could also stop the revolving door that has seen 12 quarterbacks take snaps for Montreal since CFL all-time passing leader Anthony Calvillo retired at the end of the 2013 campaign.

Now it is Saskatchewan that needs to find a starter. Gale Mitchell got into nine games last season, while former Alouette Brandon Bridge of Mississauga, Ont., Jake Waters and Bryan Bennett could also be in the mix. GM Chris Jones may also bring a new pivot.

Jones said he tried to sign Durant, but was not going to break the bank for an aging quarterback who has had injury troubles in recent seasons.

"We won five ball games last year with Darian, so that's reality," said Jones. "For us to continue to go down that road, especially when it wasn't going to be a contract where we felt comfortable, it wasn't something I felt comfortable doing."

Jones began to put his stamp on the Riders when he arrived from the Grey Cup champion Edmonton Eskimos last season by moving out stars like Weston Dressler and John Chick. Now he's traded perhaps the club's most popular player.

On his website, Durant thanked Riders fans for their support.

"Dear Ridernation: This is a very emotional time for me right now and it's hard to put my thoughts together, but I wanted to send out a thank you from the bottom of my heart," he said in a statement. "Eleven years ago when I came up to Saskatchewan, I never could have imagined the love and support I've felt from the Rider fans across the world!

"Although I wanted to stay, everyone's time comes and this is mine. I have so many cherished memories of my time in green. I'm excited for a new opportunity. I'll say more later once this has sunken in."

Durant has a 58-54-1 record in 113 career regular-season starts. He is second all-time on the Riders in attempts, completions and passing yards. But the Riders finished last at 5-13 and change was expected.

Reed said he exchanged text messages with Durant and would speak to him later Friday.

Reed said injuries are part of the risk with any quarterback. His priority now is to "make sure we protect Darian and give him weapons."

That means shoring up an offensive line that allowed too many sacks and rushed passes last season and finding some receivers to go with Nik Lewis, Samuel Giguere, B.J. Cummingham and perhaps S.J. Green, who suffered a season-ending knee injury in the second game of 2016. Reed said Green is "making tremendous progress."

The Alouettes have one of the league's best defences, but it often spent too much time on the field because the offence didn't move the ball.

The club felt it had the veteran it needed when Kevin Glenn was acquired late in the 2015 season, but he struggled to lead the offence and was traded after losing the starting job to Rakeem Cato, who in turn lost the job to Adams.

Jacques Chapdelaine replaced Jim Popp as coach on Sept. 19 and the offence picked up somewhat as the team went 4-2 down the stretch, but it was not enough to avoid missing the playoffs for a second straight year. 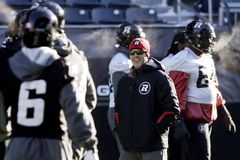 CFL’s top defensive player Solomon Elimimian re-signs with B.C. Lions
December 21, 2016
Alouettes promote assistant coach Kavis Reed to general manager
December 14, 2016
Report an error
Due to technical reasons, we have temporarily removed commenting from our articles. We hope to have this fixed soon. Thank you for your patience. If you are looking to give feedback on our new site, please send it along to feedback@globeandmail.com. If you want to write a letter to the editor, please forward to letters@globeandmail.com.
Comments