Russell Wilson has generally shied away from commenting on social issues during his professional career.

That changed Thursday when the Seattle Seahawks quarterback spoke out about domestic violence and candidly about being a bully as a child in a column for Derek Jeter's new website.

"I've tended to avoid controversial topics throughout my career, but in my first piece for The Players' Tribune, I wanted to be open and address something that's important, timely and relevant," Wilson wrote. "I've been silent on the issue for too long, falling back on the 'I can't speak to someone else's personal life' excuse. But victims need physical, emotional and financial support and care, and the resources to get away from their abusers. Abusers, you need to get help — you can change."

The column by Wilson, who was announced as a senior editor for The Players' Tribune, talks about his goal to raise funds and awareness through his new foundation — the "Why Not You Foundation" — with an initial focus on supporting victims of domestic violence.

Wilson also wrote about being a bully in elementary and middle school, saying, "I had a lot of anger that I didn't know what to do with." That admission surprised teammates who read the column.

"Well, he said that he used to beat people up. That's a surprise," Seattle cornerback Richard Sherman said. "Obviously, he said he's turned a different page in that book, but it's still pretty interesting to see that."

Wilson wrote that the perception he's given is that he's "been Mr. Goody Two-Shoes" his entire life. But he admitted to throwing kids against a wall, rubbing their heads in the dirt, biting them and knocking out teeth.

Wilson wrote he changed at age 14 and "was able to start living for others instead of just myself." And now that his professional career is established, with a Super Bowl title in hand, Wilson said he is focusing on helping domestic violence victims in the wake of the attention turned on the NFL following the Ray Rice case.

Wilson wrote that the issue needs to be addressed and not avoided and that aggression needs to be kept on the field.

"How many of you reading right now knew that October is Domestic Violence Awareness month? I certainly didn't. I had to Google it," Wilson wrote. "And that's part of why I felt so inspired to do my part. This initiative, this story, is about acknowledging something difficult, something we'd rather not see. When I look back at beating kids up on the playground, I don't like that image. But I moved past that place in my life, and I'm proud of the man I am now."

Seattle coach Pete Carroll said he talked with Wilson earlier this week about his decision to start a foundation and come out with such a strong first statement. Carroll said the team would support Wilson every way it could.

"I'm really proud of him. I think he's involved himself in a critical issue that maybe he can elevate awareness like we're all trying to do for the right reasons," Carroll said. "I thought his statements were well thought out and very clear. ... I'm hoping it has a great impact and people will pick up on it and add to it and we'll see what happens." 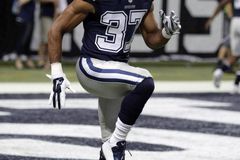