The towering Oklahoma Sooners tackle was the first player selected, going to the Saskatchewan Roughriders. St. John was the top-ranked offensive lineman in what was regarded a very deep pool. The Riders, coming off a dismal 3-15 season in 2015, expect the 6-foot-6, 309-pound native of Ajax, Ont., to compete immediately for a spot in the starting lineup. An improved offensive line is key for Saskatchewan with veteran starter Darian Durant coming off season-ending elbow and Achilles injuries the past two seasons.

The Toronto Argonauts raised eyebrows by taking the Acadia receiver fourth overall because Jones is recovering from a broken bone in his wrist. The 6-foot-4, 230-pound Nova Scotia native had 45 catches for 630 yards and four TDs last season before posting a 40-yard dash time of 4.69 seconds at the CFL combine. He also moved up eight spots to No. 10 in the CFL Scouting Bureau's final top-20 prospects list. With the departure of veteran Chad Owens (Hamilton) and versatile Andre Durie having battled injuries the past two seasons, Jones could be a valuable insurance policy for the Argos.

The Montana State linebacker was touted as a potential first overall pick before pre-draft reports that the New England Patriots were interested in signing him. That didn't stop the Calgary Stampeders from taking Singleton sixth overall. The 6-foot-2, 233-pound Singleton is a California native who had signed previously with Seattle, New England and Minnesota in the NFL. He became eligible for the CFL draft after becoming a Canadian citizen and is the third player selected after attending an NFL training camp. If Singleton remains in Calgary, he's expected to battle for a starting job.

It wasn't a surprise the UBC kicker/punter was drafted but the expectation was he'd go to the Hamilton Tiger-Cats – who don't have a kicker/punter on their roster yet – instead of the Saskatchewan Roughriders in the third round. The 6-foot-4 van Gylswyk, a native of Victoria, connected on 40-of-49 field goals last season with the Vanier Cup champions and was perfect on 46 converts. Van Gylswyk also boasted a 43.3-yard punting average. Former McMaster kicker Tyler Crapigna and veteran punter Josh Bartel are also on Saskatchewan's roster.

The Winnipeg Blue Bombers obtained a freakish athlete when they selected the 6-foot-3, 252-pound Virginia defensive lineman to open the second round. Corney, of Brockville, Ont., has taken to Youtube and Instagram to highlight his amazing athleticism. Videos show the burly lineman landing front flips in a sand pit, jumping out of a pool on to a deck and dunking a basketball standing on one foot and jumping vertically. But he can play football, too, starting 11 of 12 games last season and accumulating 36 tackles, nine tackles for a loss and two sacks.

The Hamilton Tiger-Cats did more than select a top-notch local product when they chose the Calgary running back in the second round, 14th over all. They also reclaimed a piece of their history. Timmis, of Burlington, Ont., ran for 2,987 yards over his four seasons at the University of Calgary, averaging 7.6 yards per carry, while scoring 43 TDs. The 6-foot-1, 220-pound Timmis also led the Dinos to a Vanier Cup appearance in 2013. But his late great-grandfather, Brian, won four Grey Cups as a player and coach in Hamilton before being inducted into the Canadian Football Hall of Fame. 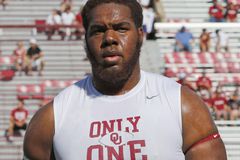 Saskatchewan Roughriders listening to offers for first overall pick in CFL draft
May 9, 2016 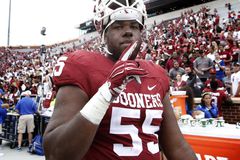 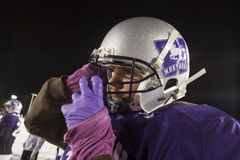