The CFL and the Calgary Stampeders insist quarterback Drew Tate was not waylaid by a concussion last Sunday during a playoff victory over the Saskatchewan Roughriders.

But an international expert says the player's own words – even after they were revised Monday – are a major red flag that indicates brain injury.

"To pretend he didn't have a concussion is ridiculous," said Chris Nowinski, co-director of Boston University's Center for the Study of Traumatic Encephalopathy, which studies the long-term effects of concussions. "It sets a terrible example for kids across Canada."

Tate, early in the second quarter, was drilled by defensive tackle Tearrius George, in a helmet-to-helmet collision. (George's hit is being investigated by the league for potential additional discipline.)

At halftime, and after the game, Tate said he could not remember the first half of play, given he had his "bell rung."

On Monday afternoon, the football team issued a written statement that quoted the 28-year-old quarterback, saying he had in fact only been "dinged" and felt "some fuzziness."

"As far as talk about a concussion, I didn't get what the fuss was because I felt fine and just wanted to play," Tate said in the statement.

But Nowinski, whose work has helped lead the push to recognize the breadth of the long-ignored issue of concussions, pointed to Tate's own words, whether "bell rung" or even "dinged."

Nowinski said the "gold standard" of concussion diagnosis is a direct report from the player.

"It doesn't matter if he passed the sideline test," he said in an interview Monday. "To put 'dinged' in the statement, you can be certain he had a concussion."

The Stampeders said they administered the "full range" of concussion tests, during the game, afterward, and on Monday morning. "Tate passed all of these," the team said.

The CFL, which contacted the Stampeders on Sunday and Monday, was satisfied.

"The bottom line is: Drew has been symptom-free each of the three times he was tested," league spokesman Jamie Dykstra said.

The Stamps plan to test Tate once more, likely on Tuesday. The team doesn't practice again until Wednesday, in Calgary, to prepare for the West Division final on Sunday in Vancouver against the B.C. Lions.

Among the Stampeders coaches, offensive co-ordinator Dave Dickenson knows concussions better than most. He played quarterback in Calgary and B.C., as well as the NFL, in a career that was marked by concussions.

"I do believe I can tell when I look into someone's eyes if they are concussed or not," Dickenson told the Calgary Sun last Sunday. "I didn't see any symptoms, and I know him pretty good."

The Tate controversy came on a weekend when three NFL quarterbacks went down with concussions, including Alex Smith of the San Francisco 49ers.

The Tate situation also recalls the recent episode of Detroit Lions wide receiver Calvin Johnson, who recently said he played through a concussion in an NFL game against the Minnesota Vikings, and now has nerve damage as a result.

The Detroit Lions thereafter put out a statement – much like the Stampeders did – that said Johnson "did not suffer a concussion at any time this season."

The team also quoted Johnson as saying: "I would like to clarify some of my comments. … I am aware that I did not suffer a concussion in our game against the Vikings earlier this year. I misused the terms 'nerve damage' and 'concussion.'"

Arland Bruce declares himself fit to play against Stamps in Western Final
November 12, 2012 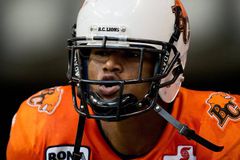 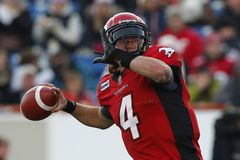 Stampeders hitch wagon to Tate for CFL West semi-final
November 6, 2012
Follow David Ebner on Twitter @davidebner
Report an error Editorial code of conduct
Due to technical reasons, we have temporarily removed commenting from our articles. We hope to have this fixed soon. Thank you for your patience. If you are looking to give feedback on our new site, please send it along to feedback@globeandmail.com. If you want to write a letter to the editor, please forward to letters@globeandmail.com.
Comments