It was midway through the second quarter of Monday's annual Labour Day Classic and the Calgary Stampeders offence was preparing to go back on the field. All of a sudden, running back Jerome Messam took quarterback Bo Levi Mitchell aside and assured him there was no hurry.

Messam – who was wearing a live microphone for the TSN broadcast – predicted that Roy Finch, the Stampeders punt returner extraordinaire – was about to do something special.

Seconds after Messam's bold prediction, Finch gathered in a 58-yard punt from the Edmonton Eskimos' Hugh O'Neill and promptly took it 90 yards the other way for a touchdown.

Finch's TD gave the Stampeders a 22-point cushion and they cruised to a 39-18 win over the visiting Eskimos before the largest crowd of the season, 33,731, at McMahon Stadium.

Finch, from the University of Oklahoma, set a Stampeders record of 993 punt returns in a single season last year and is well on his way to surpassing that total this season.

"I had a feeling Roy was going to do something special today," Messam said afterward. "He always plays big on Labour Day.

"I saw the punter outkicked the coverage and if you do that, when Roy's back there, it's going to be a problem."

Calgary improved to 8-1-1 this season and opened up a three-point lead in the Western Division standings over the Winnipeg Blue Bombers and Esks, who are tied for second.

It also marked the fifth consecutive Labour Day Classic in which the Stampeders led from wire-to-wire. The Stamps were on the board 69 seconds into the game on a Rene Paredes field goal and they never looked back.

Edmonton drops to 7-3, with the rematch on tap in the provincial capital on Friday.

"We moved the ball pretty well for good portions of the game, but we didn't get it into the end zone until the fourth quarter," Eskimos quarterback Mike Reilly said. "Obviously, you're not going to beat a good football team like Calgary doing that.

"We get 'em again in five days and we'll try to make sure it doesn't happen again next time."

Edmonton came into the game with the top offence in the CFL, but the Esks were unable to score an offensive touchdown until early in the fourth quarter when they were down by 30 and too far down to make a difference. Reilly's seven-yard touchdown pass to Kenny Stafford on a third-down gamble ended a stretch in which the Calgary defence hadn't given up an offensive touchdown in 11 quarters.

Reilly was constantly under siege from a Stamps defence that has been exceptional of late and was led on this day by defensive back Shaquille Richardson, who had two interceptions.

It was another example of Calgary's relentless efficiency on both sides of the ball. Mitchell didn't throw a touchdown pass, but he spread the ball around, with nine different receivers making at least one catch apiece. Apart from Finch's special-teams touchdown, the Stampeders also scored three times on the ground. Messam ran it in twice, while Anthony Parker added a 24-yard run in the second quarter, when the Stampeders broke the game open.

Finch didn't get a chance to handle the ball on kickoffs – the Eskimos deliberately kicked it away from him – so Monday's game actually ended a five-game stretch in which he'd produced 120 or more kick-return yards. In all, Finch finished with 113 yards on three punt returns.

"When I first got into the league, I watched a guy in Edmonton nicknamed Gizmo Williams, and I thought, 'Wow that guy is so quick and so fast and playing at a different speed,'" Stampeders coach Dave Dickenson said. "Roy is small, but he's playing with a big heart and making great plays for us.

"Let's give some credit to the guys in front of him, too. It's pride. Those guys on special teams don't get a lot of credit. Roy does. But they have a lot of pride as a unit to get the most out of every single return – and keeping it fairly penalty free. We've improved on that as the year's gone on, so … it was a good game."

The win marked the 15th consecutive home victory for the Stampeders, one short of the CFL record, jointly held by the Winnipeg Blue Bombers (1983-85) and Edmonton (1988-90).

"As my teammates know, I'm not cocky at all," Finch said. "The way I practice and the way I go about my business during the week allows me to be confident on Game Day. I don't want to change anything. I just want to continue going about, doing my thing."

Even though they won the game by three touchdowns, Messam suggested the Stampeders still had some work to do.

"We've got to close games out," he said. "We can't let teams come back. If we're winning games big, we've got to step on their throats in the fourth quarter. We can't let them get late touchdowns. We've got to be able to finish – and play four quarters of football." Opinion
Kelly: Ticats' hiring of Art Briles was about one thing – winning
August 29, 2017 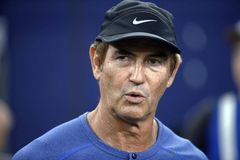 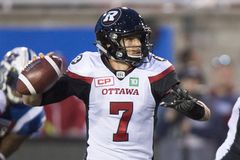