CFL training camps will open as scheduled Sunday despite another breakdown in contract talks between the league and its players.

Negotiations ended Thursday afternoon after the CFL rejected the union's latest proposal, one that included an amendment to its original demand revenue sharing be included in this deal. The players conceded revenue sharing in the current agreement, which was signed prior to the 2010 season.

The CFLPA's proposal came in response to one tabled Wednesday night by the CFL, which commissioner Mark Cohon called its "best and final offer."

The current collective bargaining agreement expired at midnight ET. And while new CFLPA president Scott Flory has maintained the union won't play under terms of the present contract, veteran players will report to their respective teams Sunday for the opening of training camp.

"We absolutely want the players to report," Cohon said. "It will be the union's decision to strike. We hope they don't.

"We've put our best offer forward, we hope they vote on that best offer."

No new talks have been scheduled.

Although the players will report Sunday, the question remains for how long. The union has sent its members strike ballots and would be in a position to launch a work stoppage prior to the start of the regular season June 26.

The two sides met Thursday morning following more than 12 hours of negotiations Wednesday. The league's bargaining unit left the bargaining table Thursday with a union counteroffer, only to return hours later to inform the players it had rejected the proposal.

These meetings were the first since May 21 when the league rejected a union counteroffer, then went public with its proposal.

"We need to protect this league and continue to grow it."

"It's so unfortunate they decided to walk away because in the end you see the minimum, $4.8-million, that's in line with what they're proposing," Flory said. "We're saying we hear the concerns . . . you don't have to spend more than that, that's up to you."

The proposal also requested a $15,000 bonus for veterans, although the CFL and union remain at odds about what constitutes a veteran player.

As well, the union is proposing teams have just one weekly padded practice during the regular season while maintaining its position on preseason and playoff compensation as well as pensions. The CFLPA also wants the elimination of the option year from CFL contracts, except for new players.

But the most notable development was the union amending its revenue sharing stance. In its initial offer last week, the CFLPA requested 55 per cent of gross revenues from TV rights, pay TV rights, radio, Internet and any other form of broadcast or telecast of CFL games, 45 per cent of revenues from sponsorship and licensing and 40 per cent of tickets to preseason and regular-season games, including the sale of luxury boxes, licenses and any other revenue related to the public attending at games.

Also, the '15 salary cap would be determined from the gross average revenue of seven CFL clubs — excluding the top and lowest-grossing franchises.

All that was absent from the newest offer.

Instead, the players proposed a "Revenue Protection Clause," allowing for a fixed cap for at least two years. After the second, if league revenues increased by more than $12-million — excluding the Grey Cup — the two sides would renegotiate the cap or the CBA would be terminated at season's end.

The league's proposal stated if its revenues increased by $27-million or more in the third year, it would renegotiate the cap with the players.

"We wanted to address an issue and concern the players had (about breakout revenue)," Cohon said. "We designed an approach that allows them in the third year of the agreement, if we hit some benchmarks collectively . . . that the players would be allowed to sit down with us and renegotiate the salary cap.

"We really addressed that important point."

But Flory said the union was surprised its "Revenue Protection Clause" was rejected.

"They're fixated on fixing the costs of the players so we came up with a system we felt was incredibly reasonable and generous where there is a protection for guys that if revenues grow over a certain amount that we're just going to recalibrate the cap," Flory said. "You don't see that (specific revenue-sharing percentage requests).

"This is our shock as to why we're in the position we're in, why they're walking out of the room."

After decades of financial woes, the CFL is enjoying economic prosperity.

It has a new contract extension with athletic apparel giant Reebok. One of its teams (Winnipeg) moved into a new stadium last season and another (Hamilton) is scheduled to do so this year, the same time expansion Ottawa will return and play at a refurbished facility.

And with attendance continuing to rise and corporate sponsorships remaining strong, the CFL is buoyed by a lucrative five-year television agreement with TSN, reportedly worth an average of $42-million annually, that kicks in this season.

That deal alone will reportedly net clubs an extra $2.7-million each this season.

There has been one players' strike since the formation of the CFLPA in 1965. It came in '74 and lasted three weeks during training camp before a three-year agreement was signed with no regular-season games lost.

Flory said Wednesday's talks, especially those in the morning, were very productive and ultimately the players want to be able to concentrate on football full-time.

"We had some without prejudice talks where people talked freely and were allowed to discuss issues," he said. "We hear, we listen, you can see our proposal (and) the movement we've made to try to accommodate and make a deal because we want to be on the field.

"We want to play football but it's apparent that the other side is going to try to dictate terms to us and our guys aren't willing to accept that." 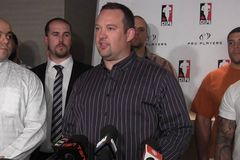 CFL unveils its latest offer in contract talks with union
May 21, 2014 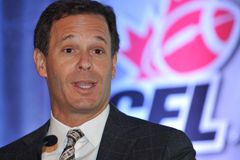 Argos on the outs in BMO Field dispute between MLSE and federal government
May 27, 2014 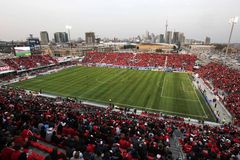 New open-air Roughriders stadium will come with a ‘roof-ready’ option
May 22, 2014 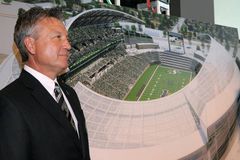