In recent years, Toronto Argonauts home games have been synonymous with sparse attendance and underwhelming fan experiences inside the cavernous Rogers Centre. Now, with new ownership, a new home and the ability to tailgate, the club is attempting to give its reputation an extreme makeover.

The team's sagging popularity in Toronto's bustling sports market has been among the Canadian Football League's most vexing problems. But since May 2015, when absentee owner David Braley sold the Argonauts to Bell Canada and Larry Tanenbaum's Kilmer Group, the mood around the team has improved: The Argos have moved out of the gloomy, oversized dome and into the newly renovated, 26,000-seat BMO Field, to play outdoors on natural grass.

Starting with the home-opener this Thursday, the Argos are transforming their game-day experience as they try to grow and diversify a fan base currently relying on 55-and-older males. To do so, the team is borrowing some elements from game-days at Michigan Stadium, one of the most storied venues in U.S. college football.

The move to BMO takes the Argos back to Exhibition Place, the same lakefront grounds where they thrived in the 1960s and 1970s before moving to Rogers Centre – then SkyDome – in 1989. At that location, they can introduce tailgating – the kind more commonly seen outside U.S. stadiums, when people park their vehicles and set up tables and grills, serving burgers and cherished family recipe potato salads. One catch – it won't be BYOB. Fans must buy $4 beers from the team, a requirement of Ontario liquor laws.

The Argos have studied games at Michigan's Big House in Ann Arbor – Toronto's new president and CEO Michael Copeland has been tailgating there for 20 years. He says "that's the blueprint."

The long-time pep band, the 50-member Argonotes, will march through the tailgate area and lead fans over to the stadium (just like UM's 400-person marching band does). In addition to the Argos' dance team, they've added a crew of acrobatic collegiate-style cheerleaders. The UM Wolverines have a ritual when players run out of their tunnel – they leap up to touch the famous "Go Blue M Club Supports You" banner as they enter the stadium. Already in the Argos' solo preseason game at BMO, fans gravitated to line the players' entryway, pounding their shoulder pads and high-fiving them as they ran through.

"If we become like Toronto's college football team, it will differentiate the Argos from every other team in the city," said Copeland. "I have 100-per-cent confidence that we're going to be wildly successful and before long, you'll see people wearing our merchandise on the streets. We're going to knock down all the old barriers that people had about calling themselves Argos fans. Everything we're doing now is going to be professional, fun, exciting and done the right way."

Copeland had been the CFL's chief operating officer since 2006, where he orchestrated plans to improve the financial footing of a league that had lacklustre branding and several failing franchises. Sara Moore, who had been the CFL's vice president of marketing and events since 2011, also joined the new Argos executive group, taking a post as the team's senior VP of business operations.

"A smaller stadium has created a big opportunity, but someone had to put the strategy in place and make the team relevant," said Moore. "The team has 143 years of history, and the brand meant something at one point, but it languished. I used to go to Argos games as a kid, but I had never taken my own kids because no one was giving families like mine a reason to go watch them. So this opportunity to work with Mr. Tanenbaum and Bell – it's a pretty awesome sports business challenge to be handed."

The Argos suffered tremendously with fans last season. Braley had already struck the deal of sale, but the team had yet to change hands, so the owner stopped investing in it.

The team was thrown scraps for home dates at the Rogers Centre, a venue heavily booked for Pan Am Games and the Toronto Blue Jays' playoffs. The Argos played one "home" game out in Fort McMurray and, when dates conflicted with the Blue Jays, other games were played at the stadiums of rival CFL teams. In the five games the Argos did play at the 50,000-seat Rogers Centre, they averaged just 16,966 fans.

"We always felt like renters in the Blue Jays' home," said Argos defensive lineman Ricky Foley. "This home is ours and walking in there is incredible. Sure, we share with TFC, but we feel welcome, and we have a beautiful new locker room with our logo on it for the first time. In Rogers Centre, it felt like the fans were miles away. Now they're on top of us. How do you achieve home-field advantage when you don't have a real home? We've got that now, and we want to make BMO a hard place to play. This is our house – that's so crucial in football."

A new stadium alone isn't enough. The Argos must attract the attention – and disposable cash – of families, students, and young professionals living in nearby Liberty Village. The Argos must battle the perception of being a minor-league ticket in a major-league market dominated by the Maple Leafs, Blue Jays and Raptors.

The Argonauts hired advertising agency Bensimon Byrne, the same people behind the CFL's "This is What We're Made Of" campaign. They have blitzed the city with ads on TV, radio, bus shelters and subway wraps, and taken to social media. The ads centre largely on taking it outside – images of attractive 20-somethings tailgating and Argo players running past recognizable parts of Toronto.

The franchise is attempting a big splash in the opener. A 300-person marching band will play in the stadium. There will be a free pre-game concert in a licensed outside gathering spot named The Shipyard, and a free concert featuring Canadian artists The Strumbellas and Kardinal Offishall. Argo legends Joe Theismann, Rocket Ismail, Pinball Clemons and Damon Allen will take part in the tailgating and attend the game.

It may take time to turn Torontonians on to the old Double Blue.

"The tailgating will resonate, but some of the college elements are more traditional, and they may not be familiar or appealing to Toronto's millennials or new Canadians," said Vijay Setlur, a sports marketing professor at York University's Schulich School of Business, but also an Argos season-ticket-holder for 23 years.

"Fans will need a reason to care. The Jays have Josh Donaldson or Jose Bautista, the Raptors have guys like DeMar DeRozan or Kyle Lowry, and people care about them. Name some Argos that people care about or even recognize? Football can often be too technical for new fans. They need to teach people about it, and do a better job of profiling the players."

The Argos say it's realistic to sell out all nine home games, plus possible playoffs. They expect a boost during the Canadian National Exhibition, when there will home games on Aug. 20 and Aug. 31, and those tickets will double as admission to the CNE.

"We know there are about 35,000 people between the ages of 20 and 30 living within a kilometre of the stadium," said Copeland. "We can never replicate what takes place at Michigan, but we can take the guts of what they do there and let fans take it where they want to. We want to create a social experience that's affordable and fun, so people get outside their condos for an afternoon and connect with their city." 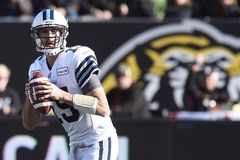 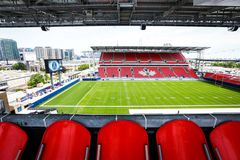 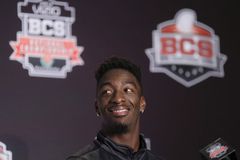