Popp, like many others from within the Argos, spoke emotionally on Tuesday about the collection of players and coaches coming together against all odds to win Sunday's dramatic 105th Grey Cup. The Argonauts are the CFL's lowest-drawing team, and they didn't capitalize after they last won the Grey Cup, in 2012. In fact, in 2013, they had a drop in the number of season-ticket subscribers. This time, the club is determined to seize the opportunity.

"If you're not a believer, start believing," Popp yelled. "If you haven't joined our family yet, we welcome you."

It was the theme of the day as the team held a celebration rally with a healthy crowd of supporters. The square was about three-quarters full, and the fans even lined the large archway that overlooks the space in front of Toronto City Hall.

It was not a parade rolling down Bay Street, as it was in the days when championship Argos teams featured Damon Allen and Pinball Clemons, or Doug Flutie and Don Matthews.

The current Argos players filed off buses right into the square and walked through the crowd with their Grey Cup. They are not the highest-profile sports figures in Toronto by a mile, but they made every effort to show off the men behind the helmets on Tuesday.

Popp made them laugh. Contemplative head coach Marc Trestman quoted them a message from Martin Luther King, Jr. about togetherness. Grey Cup MVP DeVier Posey shouted out Toronto suburbs and gushed about the team's best crowd of some 24,000 at BMO Field for the East Division final. Linebacker Marcus Ball let the crowd in on the team's slogan "today is the day." Co-owner Larry Tanenbaum, who rarely speaks at such events, spoke about his pride. Then Ricky Ray – the stoic quarterback who is a man of very few words – actually created some mystery and intrigue.

The crowd chanted "One more year, one more year" to the 38-year-old, who insists he has yet to decide whether he will return next season. In that moment, Ray taunted them playfully.

A season after going 5-13 and missing the playoffs, the Argonauts completed the worst-to-first turnaround with a 27-24 comeback victory over the highly favoured Calgary Stampeders in a memorably snowy Grey Cup – one that drew 4.3 million viewers on TSN. It was Toronto's 17th Grey Cup championship, the most of any CFL franchise.

The Argos business and marketing departments will be very busy this off-season. They say the Cup will be highly visible around Toronto. The video and photos compiled from the team's run through the past two weeks, they say, is invaluable sales material.

"We've got the right owners, the right building and a championship team now, but even all of that is not enough. We know we've got to really go hard in this market," said Sara Moore, the Argos senior vice-president of business operations. "We had nearly 25,000 people in the building for the East final, they saw an amazing game, we were beyond capacity at the tailgate [pregame party] and now everybody knows how great an Argos game can be in Toronto. There will be no off-season for us. We're on the phones as of this afternoon selling tickets."

While the Argos drew a large and rowdy crowd for the East final, they averaged just 13,913 fans a game at BMO Field during the regular season. They say they'll be doing lots of off-season outreach. It's no easy task while competing against the likes of the Blue Jays, Raptors and Maple Leafs in a city with a vibrant entertainment scene.

"The Argos need to stoke people's emotions. The Argos are an institution in this city and they need to link the team to the city and its evolution so people who have civic pride about the city can feel that same pride in the team," said Vijay Setlur, marketing professor at York University's Schulich School of Business. "The team has to act major league to be treated major league. They've fallen quite a ways down the ladder of importance in this city, and it will take a lot of work to regain their place in the marketplace."

When asked if the Argos expect a bump in ticket sales, Moore said, "unequivocally, yes."

"We also have a better plan now than we did a year ago," she added. "We're energized, we had lots of people coming out to see a game for the first time, many people at the Eastern final – those are the people we plan to talk to over the next few weeks. We will absolutely see a bump in our season tickets." 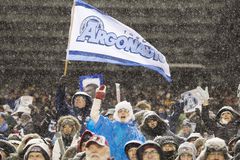 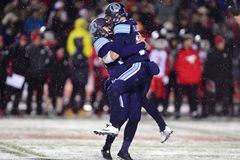 Argonauts touch down in Toronto with Grey Cup
November 27, 2017 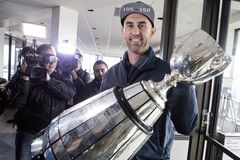