Their first encounter came at Dunn's Famous, a Montreal smoked meat restaurant, after a game two years ago.

Travis Lulay, then a third-string quarterback with the B.C. Lions, was enjoying a sandwich when Alouettes quarterback Anthony Calvillo walked in with best friend and former teammate Barron Miles, who was then a Lions defensive back. Lulay knew he was in the presence of the CFL's best quarterback, what he didn't know was the loop's top passer was familiar with the redheaded rookie.

Two years later, Calvillo and Lulay don't have a relationship per se, but you can bet the former has become far more familiar with the latter. After all, as it stands now, Lulay is the best bet to take the torch from Calvillo as the CFL's preeminent quarterback, and the two could even square off as finalists for the most outstanding player award during Grey Cup week.

Their next encounter, however, comes Saturday at B.C. Place Stadium, where the Lions and Als will conclude the 2011 CFL regular season in a game where first place in both divisions could be on the line.

The Lions clinch first in the West Division with either a victory, or losses by both the Edmonton Eskimos and Calgary Stampeders. The Alberta teams will have played their games by the time the Leos and Alouettes kick off, so B.C. will know where it stands.

Montreal needs the Stampeders to beat the Winnipeg Blue Bombers in the first game of the Saturday doubleheader. If so, the Als can win their fourth consecutive East Division title by defeating the Lions that night.

For everyone who doesn't have a horse in this race, the optimal scenario would be for both teams to be playing for first place. That would setup a showdown between two of the CFL's model franchises, and with apologies to Edmonton's Ricky Ray, between the two best quarterbacks.

Lulay, 28, is an unabashed fan of Calvillo.

He remembers watching a game against Winnipeg last year, when Calvillo threw a fade pass down the seam on a third-and-three. It caught the young quarterback's eye because that particular throw has to be pin-point accurate, and most pivots are hesitant to attempt it on third down. It showed just how confident, cerebral and precise Calvillo is. As a student of the position, Lulay thought it was "awesome."

"I like watching Anthony," Lulay said. "He's competitive. He's so in command of what he's doing. And his physical skills are obviously very good. He is constantly attacking the defence, and you can just feel the command he has of their offence, and the grasp he has of what they're trying to achieve. And that's just on TV.

"Watching the film, what's so impressive is how often he gets the ball to the guy who has the best chance of making the play succeed. He is always getting it to the most open guy. … Ever since I've been in this league, he's set the bar for quarterback play."

Indeed, Calvillo has set the bar for quarterback play over the last decade, and his name will live long after his playing days are done thanks to his professional football record for most passing yards.

The Lions are very hesitant to compare their second-year starter to a CFL legend, but the words Lulay used to describe Calvillo – competitive, command, confidence, leadership – very much apply to his own game.

"Travis has elevated himself to the next level," said Lions general manager and head coach Wally Buono, adding Lulay is an up-and-coming quarterback, but not yet a superstar like Calvillo. "He's making believers out of anybody who wasn't a believer." 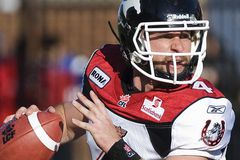 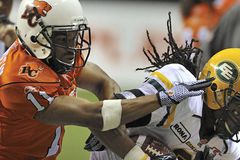