Okay, we're not certain that's a headline somewhere in North America this morning. But if journalism is simply history written on the fly, then let history judge that, after getting getting panned by press and public, NHL commissioner Gary Bettman made the first move in this latest labour mess.

True, the concession was incremental, a work lovingly crafted by a lawyer to say much and reveal little. There may be no immediate impact from the re-jigged figures - that may yet take weeks, even months. But make no mistake. Bettman and his bosses have discovered in the last two weeks that they've overplayed their hand with the public, trying to make the "perfect" deal of 2005 even more perfect in 2012.

Abraham Madkour, executive editor of Sports Business Journal, summed up the impatience with the league's strategy before Tuesday. "In the current NHL talks, public opinion and media coverage are clearly on the side of the players," he wrote Monday. "The question is: When will the league feel the need to publicly and aggressively promote its position? Because right now, league officials don't appear concerned with winning over the public and explaining why they want what they say they need."

Outfoxed in the public realm by NHLPA executive director Don Fehr conceding the salary cap and buried by social media for grasping, the NHL realized it needed to protect its flanks. So instead of the players making public concessions off the first offers, it's the league that felt it had to announce follow-up proposals it could call "significant" and "meaningful". And that's the real story of Tuesday's news.

Back in December of 2004, it was NHL Players Association director Bob Goodenow who blinked first in the hot stare of public scrutiny, conceding a 24 per cent salary rollback for his members. There were many months still to go till a deal was signed in July of 2005. From that moment on, however, Goodenow never could regain leverage over the NHL owners who thought they had him on the run.

Goodenow's NHLPA eventually collapsed upon itself with members like Trevor Linden and Jarome Iginla going behind the union's back to cut a deal. Bettman's $1-million threat to chatty owners and league personnel will avoid that kind of rout for the NHL this time. It will still extract concessions in the face of little evidence justifying those concessions.

But it has tested what will fly with its customers and found that, while there is no great love for the millionaire players, the billionaire owners are getting even worse reviews with the paying public. Mark it down. August 28. The day the ground moved beneath the NHL.

MLB TV Rights: While the NHL squabbles over dividing its $3-billion revenue pie, MLB just sold one piece of its TV rights to ESPN for $5.6-billion over eight years. Other parts of its national package with FOX, TBS and regional networks will make that seem like pocket change. One team, the Los Angeles Dodgers, may reap between $4-5 billion over 20 years in its next contract.

That would be the MLB that hockey folk say is a smoking ruin because it doesn't have a snappy salary cap (it has a luxury tax). The league where only rich teams win and competition is too predictable. The league where they haven't had a labour stoppage in 18 years (or three NHL labour disputes).

Write your own NHL punchline here:

No News Is No News: Over at The Score network, which was sold last week to Rogers, staff are being told that it'll be programming as usual till next February. Score Media chairman John Levy had a staff meeting Monday to brief the estimated 250 employees about their future. Outside of those who'll stay to service The Score's phone app and other digital products, there wasn't much to say.

It's in the hands of Rogers programmers who are currently spit-balling ideas for what to do with their new toy. But with a 6-2 lead in channels versus TSN, you have to wonder if Rogers mightn't get aggressive in purchasing some more acquisitions. Even as it tries to put a stick into Bell's spokes as it attempts to buy Astral Media.

Channel Hopping: As if it needed a reminder that an NHL lockout is a really bogus notion comes this news from the league's broadcast partner in the Excited States of Hockey. NBC Sports Network (formerly Versus/ OLN) is getting a Bob Barker "c'mon down" on the menu of cable giant Direct TV. The Comcast/ NBC venture will move from Channel 603 all the way up to Channel 220. In the world of endless cable content, this is like moving from the stacks in the book store to one of those "recommended by the staff" tables.

For Usual Suspects, anything above Channel 13 is like an exotic vacation. You like to know when you get there that the sheets are clean and the shower doesn't have a months worth of mould growing on it. But rescued from the nosebleed numbers, viewers might be emboldened to find hockey on a lower channel as they scan for the Breaking Bad marathon or Dog The Bounty Hunter.

If there is hockey, that is. Right now, that is a problematic issue. (As we've said, the lockout ends when Gary Bettman convinces himself that Don Fehr's best ideas were his first.)

In addition, many Americans were finally made aware that NBCSN even existed during the Olympics, when the mother ship of NBC spun off diving or archery or field hockey onto the cable channel. Having sampled the wares of the IOC on NBCSN, it might now be easier to accept hunting for hockey on the re-branded channel. If there is hockey, that is. (see remarks above).

Let's Be Frank: A good performer knows when to make a good exit. So it is with comedian Frank Caliendo, who's bid adieu to FOX's Sunday NFL pregame show. For years Caliendo-- as John Madden/ George Bush/ Jack Nicholson-- made jokes about Terry Bradshaw that Terry didn't get and jokes about Howie Long that Long did get. Perhaps the best bits had Caliendo as Charles Barkley and pal Aries Spears as Shaq doing their "turrible, turrible" act.

The last couple of years the material had begun to thin, so props to Caliendo for getting out before he ended up looking like Jay Leno. Comedian Rob Riggle (you've seen him everywhere but you don't know his name) gets the gig. Good luck. It's a tough room.

Luck Of The Irish: And just for slaps and giggles, NBC has decided to send its Irish golf analyst David Feherty to Saturday's Notre Dame/ Navy game in Dublin. That's the Dublin in Ireland. Feherty's going to ask the fans in attendance if they have any idea what in the name of Jesus, Mary and Joseph is happening on the playing field. Here's several punts he can't get through the broadcast without mentioning Rory McIlroy and his Irish pal, Tiger O'Woods. 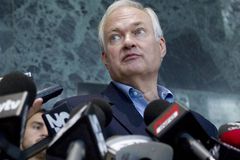 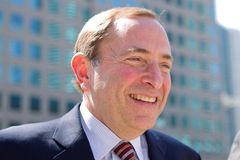 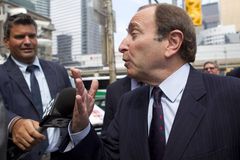 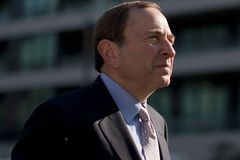