Annie Park shot an 8-under par round of 63 on Sunday to win her first career LPGA Tour event at 16-under at the ShopRite LPGA Classic in Galloway, N.J.

Park began the final round of the 54-hole event four shots behind second-round leader Sei Young Kim of South Korea. But the 2013 NCAA individual champion while at Southern Cal began to chip away at the deficit with three consecutive birdies beginning on the third hole.

Park eagled the par-5 ninth hole to make the turn in 5-under 32. Three more birdies in a five-hole stretch got Park into sole possession of the lead at 16-under. She reached the par-5 18th in two shots, but settled for a three-putt par.

Playing behind Park, Kim three-putted for bogey on the 16th hole. Needing to hole out from the fairway on the 18th, Kim shanked her approach, sealing the victory for Park.

Japan’s Sakura Yokomine finished solo-second place after carding the low round on Sunday with a 10-under 61 that vaulted her to 15-under for the tournament. Marina Alex finished third at 14-under, followed by Kim another shot back. Australia’s Su Oh and Germany’s Sandra Gal tied for fifth at 12-under.

The victory marks another major step in the career of Park, a highly decorated college player who has struggled through various injuries the past few years. She began 2018 with conditional status on the LPGA Tour, and even had to Monday qualify for an event in California earlier this year.

“My putting was great, it’s just amazing how a putt that I look at goes in, so it was just a great day,” Park told the Golf Channel while Kim was still finishing the 18th hole. “Personally, I wish I had broken my own personal record, it was 8-under. I wish I could have birdied the last hole to break that, but there’s more golf to play.”

Her first career LPGA victory came less than 150 miles from her hometown of Long Island, N.Y., and came in front of a host of friends and family who made the trip to watch Park.

“I can’t really describe it in words,” Park said. “Been through a lot of struggles. I thank my family for being here. There’s so many people that supported me, and without them I can’t be here where I am today. So I thank them so much.”

Park is the first former NCAA Division I Individual Champion to win on the LPGA since Stacy Lewis (Arkansas, 2007) at the 2017 Cambia Portland Classic. Her previous career-best finish on the Tour was a tie for sixth at the ShopRite.

“If I wasn’t (nervous), that’s a lie,” she said of the closing holes Sunday. “But I kinda got comfortable out there after nine (holes). Just focusing on each shot was the key, staying calm out there. With all that nerve ... it was such a crazy day.”

The final round began shortly before noon Eastern Time as the second round was delayed due to inclement weather and suspended for darkness Saturday night. The players went off in groups of three off of the first and 10th holes. It is the fifth consecutive LPGA event and eighth overall in 2018 that has suffered through weather-related delays.

The final round was a disappointment for Kim, who set a new tournament record with her 10-under 61 in the second round, which she finished the final three holes of Sunday morning. Kim’s closing 70 was the highest round of anyone who finished in the top 10 outside of France’s Celine Herbin, who dropped into a tie for 10th place with an even-par 71 on Sunday.

Former top-ranked amateur Leona Maguire finished tied for 15th at 8-under in her professional debut after shooting a 2-under 69 on Sunday. She carded scores in the 60s in all three rounds with a 69 on Friday followed by a 67 in the second round.

Defending champion I.K. Kim from South Korea finished in a tie for 17th at 7-under along with Sweden’s two-time champion Anna Nordqvist and former No. 1-ranked player Lydia Ko. 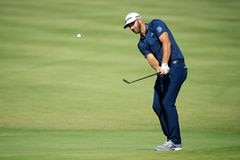