Just a casual round of golf among friends. That’s what it seemed like Friday in the grouping of Brandt Snedeker, Brooks Koepka and Justin Thomas at the RBC Canadian Open.

The PGA Tour stars might have been competing hard at Hamilton Golf and Country Club during the second round of the national championship, but they made their work look easy, sharing playful banter between shots and a whole bunch of birdies.

Especially Snedeker. He posted eight birdies and an eagle to shoot a course-record 60 and vault into the lead, which he held until late in the day when fellow Americans Scott Brown and Matt Kuchar overtook him. It was one of those rounds, as Snedeker put it, “where everything comes together.”

"Today was a lot of fun,” said Snedeker, who’s seeking his second Canadian Open title. He also won in 2013 at Glen Abbey in Oakville, Ont. “The hole looked like a beach ball to me. Looked huge all day.”

Snedeker missed just two fairways off the tee during the round, allowing him to attack the soft and receptive greens at Hamilton, and he rolled in 136 feet of putts with his little pop stroke. Nine-under par through 16 holes, it suddenly dawned on him that golf’s magic number of 59 was within his grasp if he could make birdies on his final two holes at the par-70 layout.

“To be honest with you, I didn’t think about it until I got on the 17th tee,” he said of 59, which he has shot once before in PGA Tour competition, at the 2018 Wyndham Championship. “Oh gosh, I thought, I’ve got a chance. Wasn’t really paying attention earlier.”

Koepka and Thomas, however, couldn’t help but pay attention.

“It was fun to watch him,” said world No. 1 Koepka, who shot four-under 66 to save himself from missing the cut.

“It was easy to feed off him coming into the back nine. I mean, both he and JT [Thomas] played great rounds. … I just joined along with them on the birdie train.”

Thomas, who entered the Canadian Open at the last minute to help him prepare for next week’s U.S. Open, was one shot better at 65. Although, it didn’t feel that special.

“I felt like I didn’t play very well playing with him,” Thomas said of Snedeker. “I mean, man that guy can putt. It was unbelievable.”

While Thomas doesn’t necessarily believe players in a hot group can draft off one another, the way cars do in a NASCAR race, he acknowledged Snedeker’s blitz set a positive tone for the trio of Americans.

“I think it might just help your body language and your mental side a little bit,” Thomas said, “but I would have a hard time believing that Sneds shooting 10-under is going to make me shoot five-under. I’ve still got to hit the golf shots.”

Thomas has been friends with Koepka for years and has gotten to know Snedeker better recently. Snedeker and Koepka have been acquainted at least since the 2016 Ryder Cup, when they teamed up on the U.S. side for a couple of sessions (winning both).

The comfort level in the group led to rambling chats during the second round, mostly touching on other sports such as boxing, mixed-martial arts and hockey. Golf chat was at a minimum.

“I don’t think people realize we’re not talking about golf the majority of the time we’re out there,” Koepka said. “I don’t know how long we played, five hours, maybe a little more. We’re not going to talk about golf the entire time. It’s fun to mess around a little bit and talk about other things.”

Added Thomas of their friendship and amicable rivalries: “We like to give each other crap and jabs.”

The rest of the field may not have felt the same camaraderie in their respective groups, but they enjoyed the ideal weather and course conditions that invited low scores.

Brown and Kuchar both reeled off seven-under 63s to share the lead at 12-under, a stroke ahead of Snedeker.

Brown said he was aware of Snedeker’s 60 and other low scores in the morning as he set off around Hamilton. ”You feel it puts a little more pressure on you because you feel like you need to go out and shoot a good round,” he said, “but you also know there are birdies. I was able to make quite a few and it looks good for the weekend.”

Canada’s best hopes held their own. Nick Taylor shot 65 while Adam Hadwin and Mackenzie Hughes each carded 66s. Ben Silverman had the Canadian round of the day, ripping off a 61 and bringing the hometown fans to their feet.

“If I shot nine-under in Texas like this I wouldn’t get the same kind of reception,” Silverman of Thornhill, Ont., said. “I have family and friends here. It’s actually my second straight Friday in a Canadian Open shooting nine-under. Pretty pumped about that.”

Taylor finished the day tied for third place with Snedeker, while Hadwin was solo sixth. Hughes and Silverman were in a group with four others sharing seventh place, which means Canada has four players in the top 10 heading into the final two rounds on the weekend.

Two other Canadians, Richard Jung and Roger Sloan, also made the cut. Mike Weir and David Hearn were among the homegrown talents who didn’t reach weekend play. 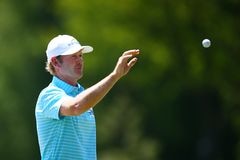 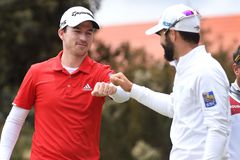 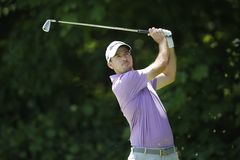