Phil Mickelson had everything go his way Sunday in the AT&T Pebble Beach Pro-Am.

He just couldn’t beat the darkness.

On a wild day of weather even by Pebble Beach standards, sunshine gave way to a hail storm that covered the greens in a sheet of white in a matter of minutes. The delay kept Mickelson from finishing off a remarkable rally in which he turned a three-shot deficit against Paul Casey into a three-shot lead until it was too dark to finish the last two holes.

Mickelson at least wanted to try.

“I can see fine,” he said to a PGA Tour rules official as they walked up the 16th fairway. “I don’t want to put Paul in a bad spot.”

Casey simply couldn’t see, and we realized it was not possible to finish all 18 holes – “We can’t finish two holes in six minutes,” he said to the official – he opted to mark his ball on the 16th green.

Mickelson already made his par on the 16th and was 6 under for the day, with no bogeys on his card, and 18-under par for the tournament. Casey has a 3-foot par putt to stay three shots behind when they return at 8 a.m. Monday to play the par-3 17th and the par-5 18th.

Lost in the late start – one hour delay from rain, a two-hour suspension from hail – was sheer brilliance from the 48-year-old Mickelson who didn’t come remotely close to making a bogey and was on the brink of a fifth victory in the AT&T Pebble Beach Pro-Am.

His first one also was a Monday finish, when players returned in August – more than six months later – to finish the third round of the weather-plagued tournament to make it official.

“We’ve got two tough holes left and I don’t want to jump the gun and get past that,” Mickelson said. “I know a lot can happen in these two holes and they have happened in the past, so I want to stay focused and just come out tomorrow and try to finish it off. I wish we could do it tonight.”

Mickelson made his big run starting with a 9-iron to a foot behind the cup on the par-4 ninth. That was start of a five-hole stretch when Mickelson made three birdies and Paul Casey had two bogeys, taking Lefty from two behind to three ahead.

“I didn’t make anything. I hit some good golf shots and didn’t get anything out of it today,” Casey said. “Phil has put together a spectacular round of golf so far – 6 under, no dropped shots. Remarkable stuff.”

Even as Mickelson strongly hinted at wanting to finish – at point suggesting they play the 17th and he could scoot ahead to get a ball in play on the 18th so at least he could finish – Casey stood his ground.

Casey was at 15 under, tied with Scott Stallings, who closed with a 66. Along with an outside chance at forcing a playoff, finishing alone in second instead of a tie is a difference of $152,000, along with world ranking points and FedEx Cup points. Casey and FedEx executive Don Colleran had a one-shot lead in the pro-am.

Mickelson was standing on the 17th tee when he heard the horn sound to stop play, and he shook his head.

The rest of his day was far better than the weather.

Mickelson is on the verge of winning for the 44th time in his career, and matching Mark O’Meara with five victories at a tournament he first played in 1995.

It also would be his first victory on American soil since the Phoenix Open six years ago. He won the British Open that summer in Scotland, and the Mexico Championship last year.

His brilliant play still shared the stage with weather that was bizarre even by Pebble standards.

Mickelson and Casey were waiting to tee off when clouds moved in quickly moved in, and rain turned into hail that pounded umbrellas, many of them held sideways to account for the wind.

Greens quickly were covered by the tiny white pellets, and workers went from using squeegees for excess water to power blowers to remove the hail.

Sam Saunders, whose grandfather Arnold Palmer was among the Pebble Beach owners, scooped up hail and tossed it like a snowball. Patrick Reed’s brother laid on his back and tried to make a snow angel.

There was never a reasonable chance to finish in his pro-am format, with mostly foursomes across the golf course.

Casey has never won in three previous times he had a 54-hole lead on the PGA Tour, all of them by two shots or more, and he was holding his own against the relentless pursuit of Mickelson, who missed three straight birdie putts from the 12-foot range by the slimmest margins. Casey had great par saves, and then Mickelson took off.

After his 9-iron into a foot at No. 9 to get within one shot, Mickelson holed a 12-foot birdie on the 10th with a drive that hugged the right side of the fairway and likely would have bounced into the ocean if not for conditions so soft from rain that balls plugged where they landed.

Casey blinked first with a bogey on the 11th hole, and another on the par-3 12th when his tee shot came up short and into the bunker. Mickelson poured it on, showing his skills have not deteriorated a bit at age 48, controlling spin beautifully to back pin positions.

He just didn’t want to stay another day.

“I get where Paul is coming from,” Mickelson said. “We’re going to have a good chance to come out on fresh greens. I have good vision, I can see fine and I wanted to continue. In all honesty, it’s a good thing to play the last two holes in fresh conditions.”

Some players finished in the dark with no chance of winning, but showed the effect of playing without light. Scott Piercy had a 15-foot putt that was slightly uphill, and he still ran it 7 feet by the hole and three-putted for bogey. 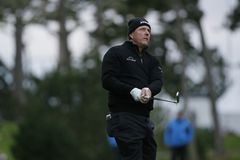