A marathon finish was only part of the challenge facing J.B. Holmes. He also had to contend with a four-shot deficit against Justin Thomas on greens that were increasingly bumpy with so many footprints over nine hours, and wind that made Riviera tougher than ever.

With one good break, two big putts and plenty of help from Thomas on the back nine, Holmes won the Genesis Open on Sunday for his first PGA Tour title in nearly three years that earned him a trip back to the Masters.

So difficult was the final round of a 34-hole day that Holmes didn’t make a birdie over the last eight holes and closed with a 1-under 70.

“I knew it was going to be very difficult to shoot a low score,” Holmes said. “I needed some help from Justin.”

Thomas shot a 65 in the morning to complete the third round with a four-shot lead. Holmes says his caddie, Brandon Parsons, asked him at one point if he thought Thomas would get to 20-under par, a score only two other players have reached at Riviera.

“I was like, ‘You mean this round?’ He was playing unbelievable there that third round,” Holmes said.

Thomas played a big part in Holmes’ victory, however.

He took 19 putts in a wild back nine that featured three two-shot swings because of putting.

Thomas, who closed with a 75, three-putted from long range on the 10th as Holmes made birdie for his first lead of the week. Holmes returned the favour on the next hole when he turned birdie into a shocker of a bogey , three-putting from 3 feet.

And then it was back to Thomas, and what turned out to be the decisive moment.

Holmes missed the 13th green to the right and chipped to 12 feet. Thomas was some 65 feet away and lagged his putt to 8 feet. Holmes made the par putt , and not only did Thomas miss his putt for par, he lipped out the next one for a double bogey.

That took Thomas from one ahead to one behind, and he never caught up.

Holmes delivered another dagger with a 12-foot par save on the 16th right before Thomas made birdie to avoid another two-shot swing, and Thomas couldn’t convert birdie chances from 6 feet and 20 feet on the last two holes.

“To take two steps back with a double is huge because it was so hard to make birdies, especially with 14, 15, 16 coming up, three holes dead into the teeth,” Thomas said, alluding to the wind. “I’m sure he would say that was probably the biggest turning point of the round for him, and that putt on 16.”

Thomas said he struggled putting in the wind and it “showed a flaw in my game.”

“J.B. won. He played great,” Thomas said of his fellow Kentuckian, whom he has known since he was a kid. “It’s always a bummer to hand a tournament. I feel like I should have won that thing.”

Holmes, who finished at 14-under 270, moved up from No. 100 to No. 42 in the world, making him eligible for the World Golf Championships in Mexico City next week. But it’s been a long stretch, and he decided not to play. As for that invitation to the Masters?

Tiger Woods shot 65 to finish his morning third round, though he was never in range of winning. Woods closed with a 72 in the afternoon, and tied for 15th.

He said he wouldn’t touch his clubs on Monday as he goes from cold air at sea level to Mexico City next week.

Maybe the biggest break for Holmes was at the par-4 seventh, when his wedge from a bunker didn’t clear the lip and buried into the grass framing the sand. He at first feared he couldn’t find it. Once he did, he was given relief from an embedded ball and escaped with a bogey.

Holmes and Thomas weren’t the only ones who struggled on greens. Adam Scott was right in the hunt until he missed six consecutive putts from under 10 feet that dropped him out of contention quickly.

Scott closed with a 76 and tied for seventh.

“You’re going to miss a few out there,” Scott said. “We saw some four-putts and three-putts, but you can’t miss every one for six straight holes. … If you look at J.B., why he won, he holed unbelievable putts and I didn’t today.”

Si Woo Kim had a 66, the low score of the final round, and finished third. Rory McIlroy almost got back in the game when he holed a bunker shot on the 16th to get within two shots, but he failed to birdie the par-5 17th and was fooled by the wind in making bogey on the final hole for a 69. He tied for fourth with Marc Leishman (68).

No one had a tougher time than Jordan Spieth, whose final round included a birdie, par, bogey, double bogey, triple bogey and quadruple bogey, the latter on the 10th hole when he hit four shots out of bunkers. He shot 81, his second-highest score as a pro. 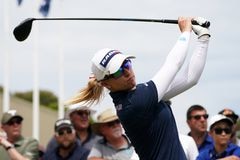 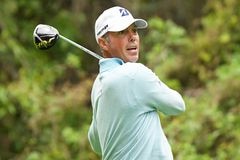 Spieth tied for lead after 12 holes at rainy Riviera
February 14, 2019 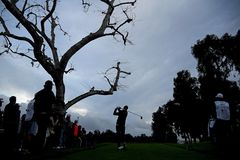