Jin Young Ko has climbed to the top part of the leaderboard – and the top of the world – with the help of a coach from London, Ont.

Gareth Raflewski, an Irish-born short-game specialist, started working with the South Korean last fall in Florida during an intense two-week boot camp in which the player completely revamped her chipping, pitching and putting.

The work has turned a very good player – Ko had won 10 times on the KLPGA Tour in her home country and twice on the LPGA Tour before she and Raflewski connected – into a great one. She has won three LPGA tournaments this year, including two majors, and leads the money list with more than US$2.2-million in earnings. She became world No. 1 last April.

The 24-year-old from Seoul has a chance to add to the haul this weekend at the CP Women’s Open in Aurora. She went deep Friday for the second day in a row at Magna Golf Club to lock herself into second place, just a shot behind leader Nicole Broch Larsen of Denmark.

“We are having a great relationship,” Ko said Friday after posting five-under-par 67, backing up her 66 in the opening round, despite playing just nine holes of practice earlier in the week (she shot 30). “He has helped me a lot.”

Raflewski is the pre-emiment short-game guru on the LPGA Tour and has a stable of high-flying players that includes the Jutanugarn sisters, Moriya and former world No. 1 Ariya.

Ko sought him out last summer at the LPGA Mediheal Championship in San Francisco, but they decided to wait until the off-season to roll up their sleeves. Ko booked Raflewski for two entire weeks in November – an unprecedented immersion for the coach – and they worked four to six hours a day together in Naples at a couple of golf courses, Tiburon and the Club at Mediterra.

“A couple of other players came up to me and said, ‘Really? Two weeks?’” Raflewski said Friday.

Yes, really. Ko overhauled her short game, learning a wider variety of shots around the green and honing her precision on approaches from inside 100 yards. She’s mastered shots of 98 and 81 yards and now tries to lay up to those distances as often as she can. “She’s putting herself in position to score,” Raflewski said.

Ko said her short-game skills were limited before she met Raflewski because the courses she trained on in South Korea were similar – in a mountain setting, requiring simple run-up shots with a 9-iron or pitching wedge. “On this tour, you need more. High shots, more shots.”

With a better short game, she’s making fewer bogeys because she’s more able to get up-and-down for par when she misses greens and she’s also converting more birdies on par-fives.

Ko also changed her putting stance and alignment during the Naples sessions. “You only have to look at a simple stat like putts per green in regulation to see how much she’s improved,” Raflewski said. (Ko is fourth in this statistic, and she’s first in hitting greens in regulation.)

Ko also changed some of her equipment, switching her wedges, for example, from one manufacturer to another – a rarity at the Tour level. When they decided to change putters, as well, they needed to find a place to do some testing using Raflewski’s analytics gear. “We just went to the PGA Tour Superstore [a big-box retailer] and I set up all my equipment,” Raflewski said. “It was pretty funny, all the staff coming out ... and taking pictures.”

Ko tried at least 30 putters before settling on one.

They have continued working together since, setting up lessons whenever Raflewski takes time away from his head teaching role at RiverBend in London to hit the road. “Even in the last few months, I’ve seen massive improvements,” Raflewski said, adding they don’t focus on winning trophies or holding the No. 1 ranking – just on getting better.

Which doesn’t bode well for the rest of the field this weekend at Magna, not that there’s any shortage of high-level talent in the mix for the title.

Broch Larsen hasn’t won yet on the LPGA Tour, but she is a former player of the year on the Ladies European Tour and has good vibes in Canada. She was the co-leader after 54 holes at the 2017 CP Women’s Open as an LPGA rookie before slipping to third place in the final round.

After her second consecutive 66 on Friday, taking her to 12-under 132, she credited some hot putting and her ability to take advantage of the par-fives. She birdied all four of them Friday and three on Thursday. But she also cited a more relaxed attitude after feeling the pressure to make the European team for the coming Solheim Cup.

“The Solheim team has been announced for the year and I didn’t make it," the 26-year-old Dane said. After the announcement, “I seemed to play a lot better. Yeah, so unfortunately, a little too late."

Yu Liu of China shared third place at nine under with Thailand’s Pajaree Anannarukarn, another one of Raflewski’s disciples, and Canada’s great hope this week, Brooke Henderson.

Defending champion Henderson shot a bogey-free, three-under 69 in front of a sea of fans, many wearing Canada’s colours on the tournament’s Red and White Day, to finish the day at nine under through two rounds. She’s three strokes off the lead heading into the weekend and two behind Ko.

Ko, in white pants and a red sweater herself Friday, said she’d welcome the chance to play the final round on Sunday with Henderson, a fellow woman of faith, should they secure two of the top three spots after the third round Saturday. “I like Brooke,” she said. “Hopefully, she likes me, too. We are having a great relationship on the Tour and she helps me a lot about Bibles, everything, so I like her.” 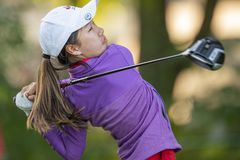 Playing in CP Women’s Open a big deal for Canadians Maddie Szeryk, Maude-Aimée LeBlanc, but not as big as tournaments ahead
August 23, 2019 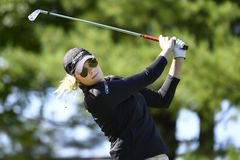 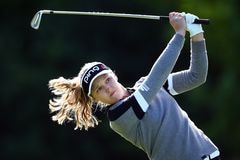