Mark Hubbard and Matthew NeSmith took advantage of favorable morning scoring conditions to shoot 8-under-par rounds of 63 on Thursday and share the lead after the first round of the Waste Management Open in Scottsdale, Ariz.

The majority of names on the first page of the leaderboard played in the morning wave. That includes the 153rd-ranked Hubbard and the 195th-ranked NeSmith.

Hubbard made eight birdies in his bogey free round, which he punctuated with four consecutive birdies to end his round.

“I think that’s a little bit of this course. You can definitely score coming down the stretch,” he said.

NeSmith began his round on the back nine at TPC Scottsdale, which he kick-started with an eagle on the par-5 13th hole. He made the turn in 6-under 30 and made two more birdies on his back nine.

“Everything kind of lined up really nicely, just made it pretty easy on myself,” said NeSmith, who chipped in for birdie on one of the only two greens he didn’t hit in regulation.

Hubbard and NeSmith hold a one-shot lead over Sam Burns and Nate Lashley, who both also teed off in the morning. Burns rolled in nine birdies against two bogeys, while Lashley had seven birdies on his bogey-free card.

Steve Stricker was the low finisher from the afternoon wave, with the 53-year old carding a 6-under 65.

The marquee names in the field did not fare as well, with Xander Schauffele (5 under) the top finisher among the five top-10 players in the field. The fourth-ranked Schauffele had seven birdies against two bogeys as he seeks his first win since 2019.

“I’m in that boat of chasing, I haven’t really won,” said Schauffele, who finished in a tie for second at last week’s Farmers Insurance Open. “My world ranking’s gone up and I am playing more consistent golf. But I’m still not doing what I want to do. I guess it’s a good thing that it keeps me hungry and keeps me humble, but the ultimate goal is winning.”

Second-ranked Jon Rahm and No. 3 Justin Thomas entered as the pre-tournament favorites and played in a group along with Harris English.

Rahm, who attended nearby Arizona State, settled for a 3-under 68 following a bogey on No. 18. Thomas finished with a 1-under 70 that included a triple bogey on the par-4 17th hole as he attempts to improve upon consecutive third-place finishes in the event.

Sixth-ranked Rory McIlroy also finished at 1 under, failing to take advantage of his morning tee time in his first competitive round at TPC Scottsdale. However, he did rally from a 3-over start through his first two holes despite hitting just half of the fairways in regulation Thursday.

“It was a good battle back,” McIlroy said. “Wasn’t the ideal start, but I knew on the back nine at least I had some par-5s coming up and a few good chances, and thankfully I was able to take advantage of some of them.”

Defending champion Webb Simpson started his day off 2 under through four holes before running into trouble. Beginning with a bogey on No. 6, the ninth-ranked Simpson went 4 over for his final 13 holes to card a 73.

Simpson was playing with two-time event champion Hideki Matsuyama, who shot an even-par 71. Rickie Fowler, the 2019 champion, continued his struggles with a 3-over 74.

NOTES: Four-time major champion Brooks Koepka shot a 3-under 68 as he attempts to snap a streak of three consecutive missed cuts. ... Tournament organizers have capped daily attendance to fewer than 5,000 fans. ... Simpson is attempting to become the third player since 1970 to successfully defend at the event (Johnny Miller, 1974-75; Matsuyama, 2016-17). 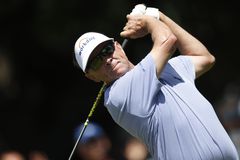 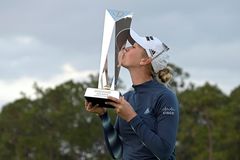 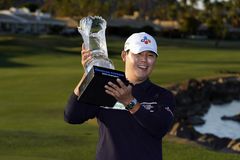